Sideline View: On your marks, get set....go

Say goodbye to the advanced mark

We didn't need the advanced mark. I thought so at its inception. But I felt I owed Dr David Hassan, and the rules committee he chairs, a chance to give it an airing.

From interviewing the former Derry goalkeeper before he took up the role, under new President John Horan, he spoke concisely on the game of Gaelic football. There was a clear desire to improve and clean up the game he played for 22 years.

For me, the jury was always going to be out on the advanced mark until now. The club scene. When it knocks the door of every player and community in the land. Away from the elite, the one or two percent who have a wider support network at inter-county level.

After taking in three rounds of club action, without a league to bed it in and with teams preparing for the white heat of knock-out football this weekend I have made my mind up.

The baggage the advanced mark brings far outweighs any benefit this radical change offers the game.

The sooner someone buys it a one way ticket to nowhere, the better for everyone. Give it a quick handshake, politely thank it for its time and send it on its merry way.

Anton Kelly may disagree. Under Liam 'Baker' Bradley's new tactic, Kelly had an assist in their first three scores, but it was only the third score that came from a Philip Bradley kick from outside the 45, which led to a free in.

For the rest of the game, they were not able to get enough possession, nor had they anyone who could float the perfect pass in. For me, there is not enough benefit to warrant a change.

On Friday night Mark Bradley didn't avail of it to score his goal for Killyclogher in their cliffhanger with Trillick. When Niall Loughlin snatched the ball ahead of Castledawson's Sebastian Leyden, goal was the only thing on Loughlin's mind. Alan Nash's whistle, to signal the mark, was simply officialdom's housekeeping.

The best forward in the Derry club championship is Shane McGuigan, who has kicked four attacking marks. The three he won against Kilrea, as well as one he caught but didn't claim, were outside of contact. With his skill set, the chances are he would've still created a scoring chance from those possessions.

At the same time, down the road from Emmet Park, Swatragh were playing Dungiven in an entertaining contest. Richie Mullan and Sean Kearney, at opposite ends of the pitch, won balls played in from outside the 45. Giving away size to their opponents and under pressure, both secured possession they had no right to win. The type that excites crowds.

Shane McGuigan, Mark Bradley and Niall Loughlin are among the top forwards in Ulster. They don't need this artificial helping hand.

If Magilligan's Eoin Canning's rasper to the top corner of the Drum net was the finish of the season, in a crucial bottom of the table junior clash, then Shea Kerrigan's point against Dungiven was the score of the championship so far. It was everything that is great about counter-attacking football. It didn't need the attacking mark and took all of 19 seconds. 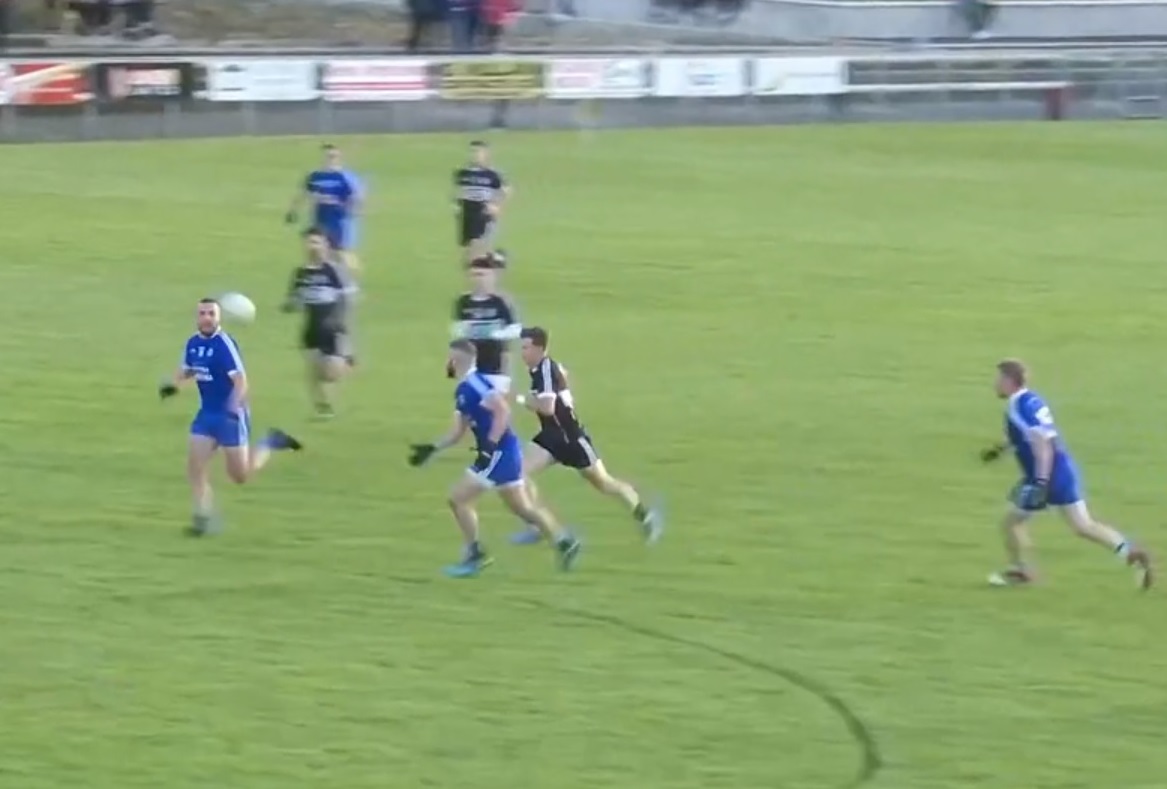 Cory Armstrong intercepted Fionntan Murphy's intended pass with purpose. Eoin McGahon, Claudy's defensive midfielder, took possession and surveyed the scene before slicing a perfect 'one bounce ball' to Aaron Kerrigan. He spun and played to Marty Donaghy who flicked the ball into Blaine Carlin, one of two support runners (see photo above), before he spooned it on to his cousin Shea Kerrigan to score. Please give us more of this.

And in the Claudy move Thomas McClarey and Niall McNicholl still had the opportunity to tackle.

The rules, as they are, are already stacked in favour of the attacker, especially with the speed of the game. Take Dungiven's penalty for example. Cory Armstrong had eyes for the ball, but wrongly made the decision to charge Sean McKeever. Every tackle has to be on the money. I think the GAA can't strip anything more away from a defender's armoury.

When beaten to a ball by a forward, one caught in the chest in space and under no duress, defenders should be given the respect of carrying out the art they were brought up to have. Jockey a forward left and right, wait for the third step (amidst a barrage of 'how long' from all and sundry) and nip in for the tackle.

There is also the referee factor. Watching back on the WeAreDerry platform, it stands out a mile, from all the games, how every referee's decision is questioned. Some rightly, but most are wrong from people with tunnel vision for their own team.

This advanced mark brings so many of them. James Kielt caught a ball delivered from a 50 metre free and Kilrea were claiming a mark. Damian Harkin quite rightly didn't allow it. In the same game Shane McGuigan played on and didn't put up his hand to claim the mark and Harkin played on despite Slaughtneil fans calling for it.

It was the first game of the season and there was always going to be indecisiveness. And in the heat of battle, there are no action replays, like this column had available when penning this argument,

Jude McAtamney picked out Francis Kearney with a terrific diagonal ball to spread the play away from Ballinascreen's congested middle. The Swatragh man's first action, before putting his hand up, was to top tap the ball and Anthony Campbell correctly waved away any appeal for a mark.

In time, we could get used to the rule. But my feeling is that there is simply not enough to be gained for the hassle it would take. We should just say goodbye and concentrate on the game we have.

The only instance I would love to see a mark is for the spectacular hang time catch by someone in the full-forward line. A proper reward for a magical skill. But how do you police the difference between that and a cheap chest catch in space? You don't, so leave it to the Aussies.

Claudy displayed the best way to beat any blanket defence. A swift move, with well-executed basic skills. This is the only way to improve the game.