After the pandemic: The need to build a fairer society 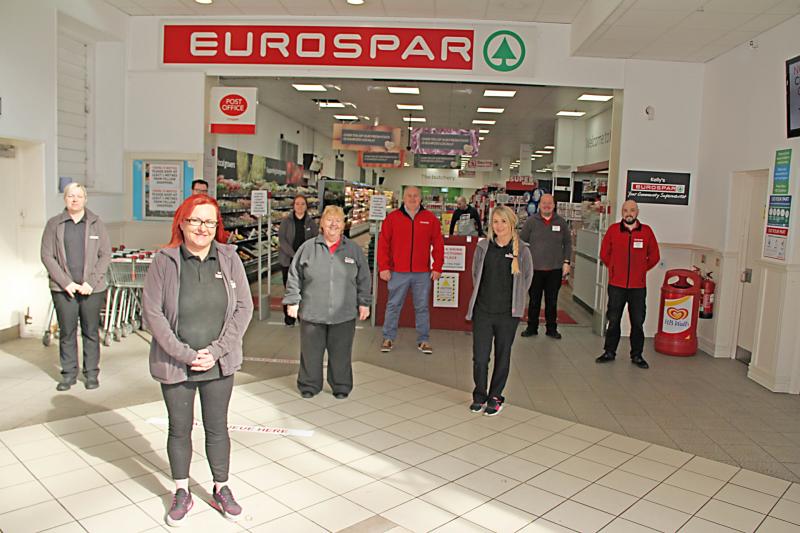 Eurospar in Creggan are among the businesses who have supported local communities.

When this coronavirus pandemic ends many lessons will have been learnt right across society.

It's fair to say that this crisis has made many of us pause for thought and re-evaluate not just our own behaviour but also many of our previous beliefs.

I was getting a few tyres on my car this week and when I asked the guy had they closed he said "no we couldn't as we have a contract with the Ambulance Service and needed to be there to provide help for them and others who needed to go to work.”

Without these people putting their own lives at risk the death toll caused by coronavirus would have been off the charts.

Prior to all of this, most people took for granted the work done by many of these individuals.

We never really gave it much thought.

Now, however, we hail many of them as heroes.

We clap for them and we now recognise how much better our society is because of their effort.

As I said earlier, a global pandemic has really caused us to pause and reflect and hopefully recalibrate what we as a society should see as important.

I used the word recalibrate deliberately because I hope it's not a temporary outpouring of sentiment for these many professions followed up by a speedy return to the way things were before.

Prior to the crisis we saw for example the care sector attract little of our attention or interest.

It's a key sector with hundreds of thousands employed right across Ireland and the UK.

Salaries are often minimum wage or just above.

The work of caring for our loved ones and ensuring they have a good quality of life is often classed as low skilled.

Their working conditions and pay never interested many of us or the press/media but in this crisis their dedication to care for the most vulnerable members of our society has been astonishing.

Their treatment by this government in regard to PPE and testing has cost the lives of hundreds of care workers.

We've clapped for everyone in the NHS and the care workers on many Thursday evenings in March and April.

Hopefully after this crisis passes, we will support their right to be paid fairly for the essential frontline work they do.

I could say the same for the thousands of cleaners who are on minimum wage and whose efforts kept hospitals and many other facilities open throughout the crisis.

Also, think of the hospital porters and canteen staff who are often paid low salaries who risked their own exposure to the virus to care for others.

The doctors and consultants are front and centre of this fight and their effort too has been exemplary but the vital effort of many others on the fringe can't be forgotten.

And it hasn't just been the workers within the public sector or the low paid within the private sector that have stood out in this crisis.

Without a doubt the contribution of charities, community enterprises, social enterprises and co-operatives right across these islands has been remarkable.

From delivering vital food parcels to the needy, to making much needed PPE their effort in the midst of this crisis has been remarkable.

Thousands of people in this city have seen first-hand and benefited first-hand from their efforts.

Quite often the support they have given was only possible through the financial support from the public sector.

This crisis should teach many within the public sector that these partnerships can bring real positive outcomes and should be built on rather than withdrawn after this passes.

Many people in broader society see social enterprises often in a bad light.

This is partially due to the narrow view of business being solely for profit and TV shows like the Dragon’s Den don't help.

In reality, Derry has many profitable well run social enterprises throughout the city and during this crisis many of them have stood with the community.

Hopefully when this crisis is over, we won't allow ourselves to forget the people who kept the economy and society going.

We will stand with them and support their calls for better pay and conditions.

This week we already seen attempts by the Tories to make migrant NHS workers pay the surcharge be met with a public backlash. It forced the Tories to do a U-turn on the policy.

People power does work. We really have to mobilise it more.

And it's not just me who thinks that this crisis provides the perfect platform to build a fairer society.

Jamie Dimon, the billionaire CEO of JP Morgan, said last week that the coronavirus pandemic must serve as a "wake-up call to build a better society".

He added: "It is my fervent hope that we use this crisis as a catalyst to rebuild an economy that creates and sustains opportunity for dramatically more people, especially those who have been left behind for too long.”

Jamie Dimon wrote this in a memo issued before the JP Morgan Annual Shareholders Meeting.

He went on to say: "The last few months have laid bare the reality that even before the pandemic hit, far too many people were living on the edge.”

Mr Dimon is a billionaire banker and if Joe Biden wins the US Presidency many believe he will the next Treasury Secretary of the United States.

I'm not a huge fan of a billionaire banker but I can't disagree with his sentiment.

In the US the pandemic showed that the largest economy in the world had far too many workers living from pay cheque to pay cheque.

So, as we move forward out of this crisis don't forget who the heroes in the economy were.

This will of course mean us putting a higher value on the work that many of them do.It's a national disgrace how we treat, pay and value the work that carers do.

Is it too much to pay them more than £8.31 per hour to look after our mothers and fathers and grandparents?

If you asked 100 people this question, I'm sure the vast majority would agree that care workers are underpaid and undervalued. As a society we need to change this.

I'm optimistic that the public sector will see the benefits of real partnerships with the social enterprise sector.

The often reported public/private partnership is not the only option.

This crisis has shown that often the private sector is not able to function in the same way as a social enterprise can.

Finally, I hope that any attempt by politicians to short change or ignore the plight of the workers who held the frontline will be met with a swift backlash from the public.

If paying public sector workers more means more taxes, then I'm all for that.

If increasing the minimum wage to £12 per hour means increased prices, then the upside is a fairer society.