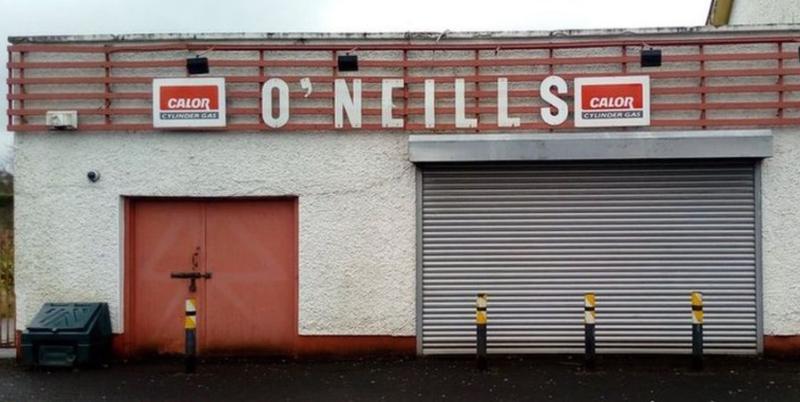 The famous O'Neills shop at Bridgend on the Derry/Donegal border.

Tributes have been paid to a well-known business figure on the Derry/Donegal border who has passed away.

For many years, Bridget O'Neill, along with her husband Bertie, ran the O'Neill's shop at Bridgend.

The shop was a popular stopver destination for people travelling between Derry and Donegal.

Families often called in to the shop, known affectionately as 'Bertie's', for an ice cream on the way home from a day out at the beach.

In recent years, 'Bertie's' also became known as the 'luckiest shop in Ireland' because of the large number of winning lottery tickets that it had sold.

Many of the winners came from the northern side of the border.

The shop closed in 2018 after more than 65 years in business.

Bridget O'Neill passed away on May 5.

Due to the coronavirus lockdown, many of her friends and family were unable to attend her funeral service at St Mura's Church in Fahan.

Delivering a eulogy to his mother, Dermot, one of Bridget's four sons, paid tribute to her.

“Bridget Mary McKenna was the middle child, one of three sisters, Roseanna was the eldest and Agatha the youngest.

“Home for them was a farm just outside Maghera in a part of Fallagloon known locally as the Quarter.

“The area was and still is full of McKenna’s and their family were distinguishable by the name ‘The Scotchie McKennas’.

“They were dealt a cruel blow at an early age when first their father, Hugh, died and then within a few years their mother, Alice.

“Mammy was just 11 years old when they were orphaned.

“Fortunately, they had an uncle, Fr Mick McKenna, and he brought them to live with him in the Parochial House in Bocan just outside Culdaff.

“One of her childhood memories there was playing shop with Agatha in the yard, much to the disgust of Fr Mick who insisted they should get back to their books and their study.

“This playing shop with cardboard boxes and cartons was a foretaste of what she would become.”

Dermot said his mother moved to Derry when she started working.

“Mammy’s first foray into business was as a shop assistant in Crooks on the Strand Road.

“She stayed in digs in Derry during the week and around this time she met Bertie at a dance in Derry.

“They fell in love and got married in Bocan and built a home in Bridgend where daddy grew up.

“They both shared a passion for business and at one time had two pubs and two shops on the go in Bridgend.

“As well helping to run the business she brought up a family of four boys, Declan, Pearse, Bert and I.

“Eventually they settled for running just a shop and worked tirelessly from 9 in the morning to 10 at night, seven days a week.

“Above all, for me, mammy had a wicked sense of humour and even near the end of her life in the Nazareth House, some of the wonderful carers there would have great crack and banter with her and would ask “Bridget, do you think I would be any good at selling winning lottery tickets?” and another would ask “Bridget, would I be any good at serving pokes of ice cream?” Her reply to all would be “You’d be useless”.”

Dermot concluded his eulogy: “Finally, as frustrating and as disconcerting as it is having only ten people here today and being unable to have a proper celebration of her life, I truly believe she is looking down on us with a wry smile because she never liked being the centre of attention, she left that role to daddy, so she would be delighted to be able to have a quiet goodbye and slip away gently without a fuss to be reunited with Bertie, her partner in love and life.”