From the cleaver to the canvas, the local artist 'living the dream'

Conor Larkin tells us about his journey to full-time painting. 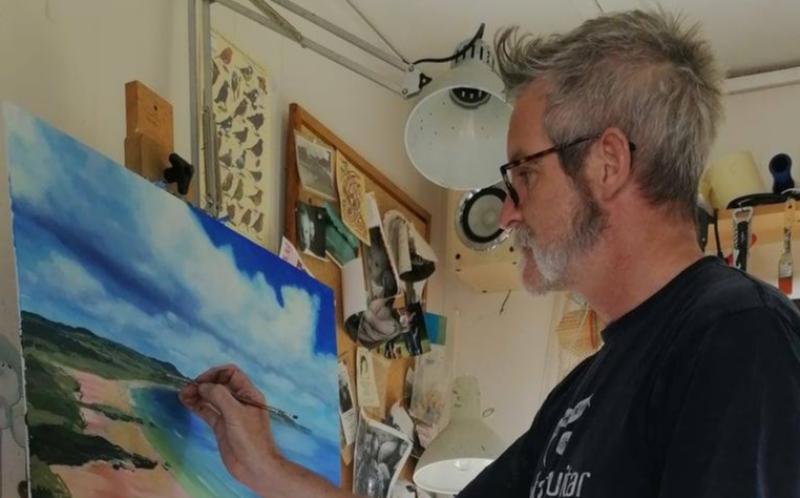 Conor Larkin hard at it in the workshop.

Life has taken County Derry artist Conor Larkin on a meandering journey. Liam Tunney tells the story of the Kilrea man who swapped the cleaver for the canvas and never looked back.

Light plays a key role in County Derry artist Conor Larkin’s work, but for years he carried his own talent with such modesty that it seemed destined to remain in the shadows.

The self-taught artist has taken the scenic route to turning his passion into a profession and began his working life in McAtamney’s on Kilrea’s Bridge Street.

“I didn’t go to art school or anything, I just left school and got a job in the butchers,” he told the County Derry Post.

“I served my time in McAtamney’s and was there until I was 22 or 23. After that I did a bit of travelling, went to Australia and America and got that out of my system.

“When I came back, I spent some time on building sites and picking fruit. I’ve only really been painting full time for the past five or six years.” His artistic talent had not gone unnoticed though and was celebrated in the early days by one of his teachers at Crossroads Primary School.

“Mrs Magill was the teacher at the time, and she brought my mum in to look at a picture I had painted. I was maybe P3 or P4,” he said.

“I remember her telling my mother that the painting was above what I should be doing for my age at that time.

“That is my first real memory of somebody picking it up. I even remember what it was – it was a lorry with a sunset behind it. I remember that vividly.”

“Even when I was a butcher, I decorated the windows at Christmas and kept painting old milk churns and that to get a few extra pounds. If I could find a smooth surface, I’d paint it.

“I would do skateboards and stuff like that when I was at school and I was encouraged by my teachers, but I never took it any further. I was lazy, I suppose.

“I ended up getting a job in a glass company and that was the first time I got a job where I was doing something creative.” 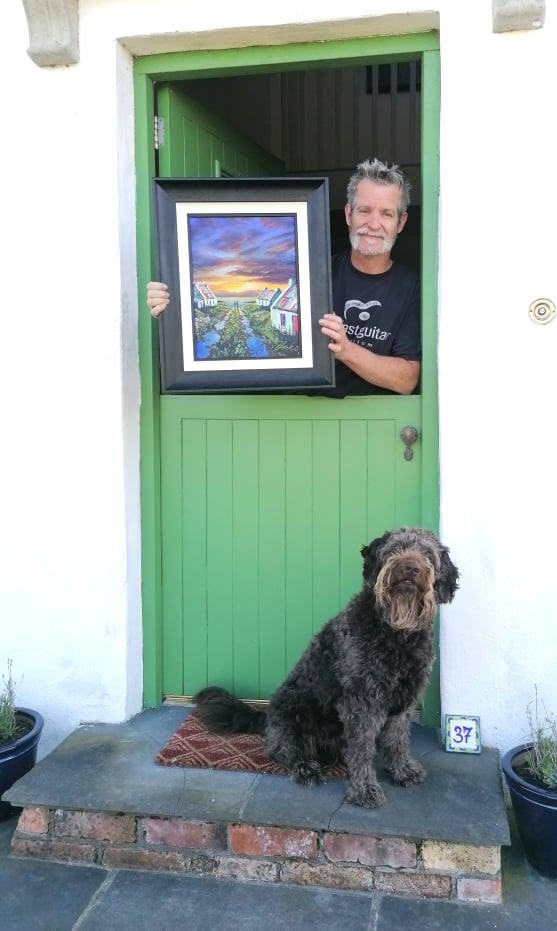 Even as the shoots of a possible career change were appearing, Conor’s professional radar hadn’t been finely tuned just yet.

“Probably the first few I did, I gave them away. It was easy to me, so I just gave them to people,” he said.

“The first one I sold was a picture of the Fleadh in Rasharkin. Well, I didn’t actually sell it, I swapped it for an amplifier for a guitar.

“I had started it, but then realised there were too many people in it and this man approached me and said ‘Look, if you finish that, I’ll buy you an amplifier for it’.

We were playing in a band together. I play a bit of guitar and sing a bit. I still have the amplifier, but it probably wasn’t that great a deal when I look at it now!”

Although the talent and ambition were there, there was still the lingering thought that painting was destined only to be a hobby.

It took the intervention of a local man to allow Conor to showcase his talent and provided the confidence boost he needed to move things to the next level.

He said: “There was a fella in Kilrea called Brendan McAllister, from Edenbane Art. He does a bit of dealing and he asked if I’d paint him a few just to see how it went.

“I did a few paintings and never really thought much of them, but he came back a week later to say: ‘I’ve sold those, would you do a few more?’

“That made me realise that people were willing to buy them, and it gave me that bit of encouragement.”

If McAllister’s support provided the carrot, the stick came in the form of a conversation with a former butchering colleague, while he was still painting stained glass in Slaughtneil.

“It was during that recession when things were getting bad. We were down to a three-day week and the stained glass work was getting less and less.

“I got talking to one of the butchers I used to work with. He’s actually a chocolatier now and he said: “If you don’t jump, how are you going to find out if you can do it or not?” 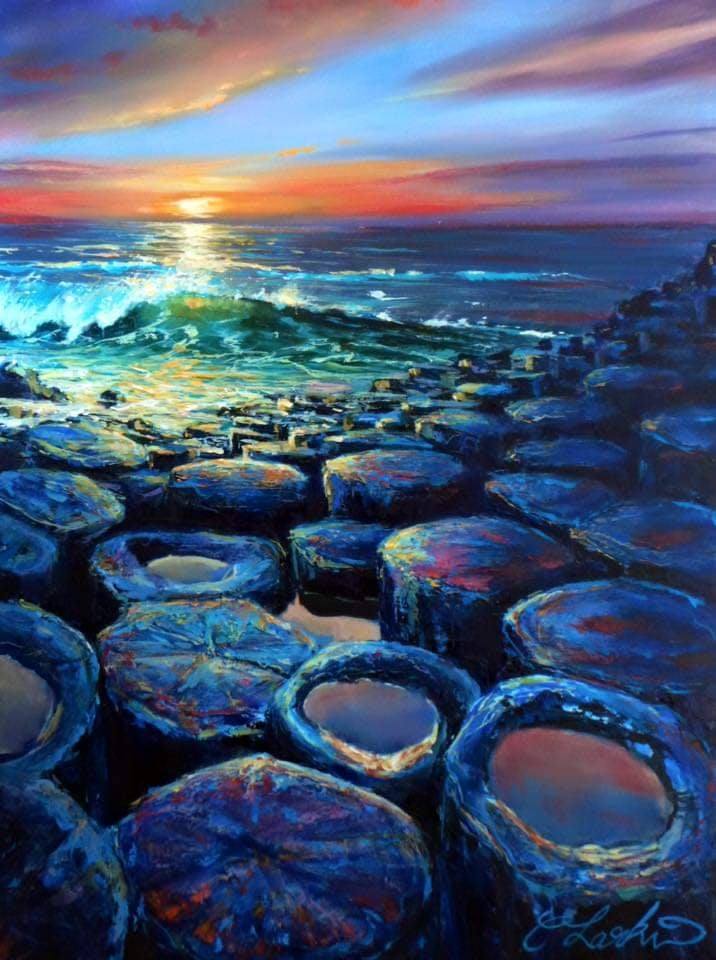 Conor jumped, without looking back. Seven years later there is a 16-month waiting list for his commissions, requests for which arrive from all over the world.

His inspiration though, stems from closer to home.

“I live down near the Bann in Kilrea and I’m out on that road a dozen times a day usually,” he said.

“There was one day there was a tree and whatever way the sun was shining on it, it got me. I ended up painting it a few times, at different times of the year.

“Sunsets and autumn light are great. I get fidgety round that time of the evening and I have to get out and get looking at stuff. That’s what I mostly like to paint.

“I also love painting old cottages. Sometimes I would drive round the country looking for old, deserted dwellings. I love the way the light plays on the whitewashed walls.

“I think everybody has a nostalgic thing for them. Where I grew up, there was an old man who lived across the fields from us and I used to spend time before I went to school over there.

“That was the real McCoy, no electricity or anything. There’s a romance about old houses., but there are less of them now. They conjure up memories for many people.” 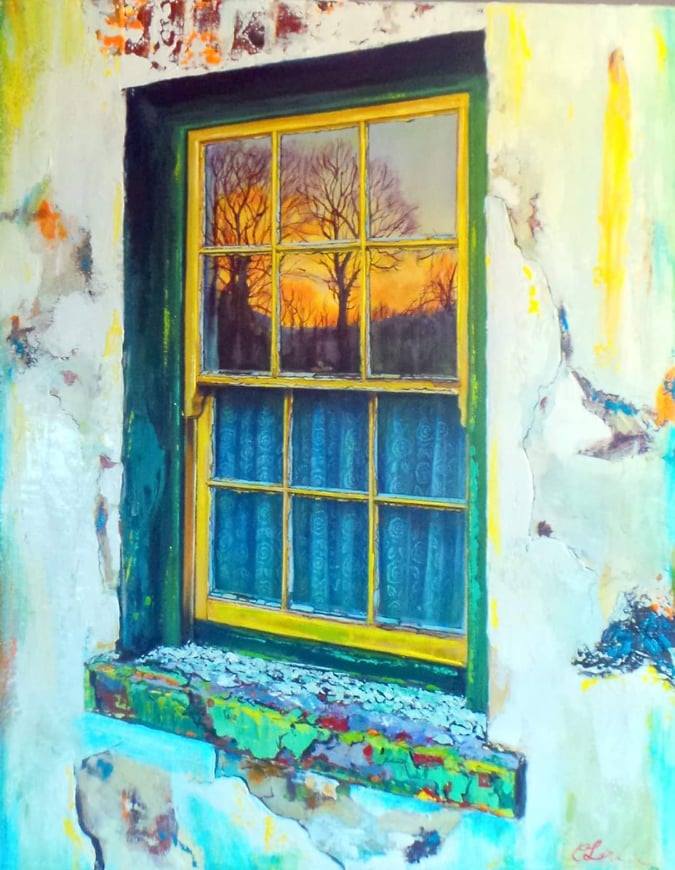 The Covid-19 lockdown hasn’t been too taxing for Conor, who doesn’t mind the solitude. It is something to which he has become accustomed.

“I’m finding it easy enough because I’m sort of used to it,” he said.

“I live out in the sticks anyway so there are days I wouldn’t see a sinner, especially when my wife is at work and the weans are at school.

“I’m pretty much on my own most of the time anyway, but I do miss being able to jump in the car and head off to the coast if I know there is going to be a nice sunset.

“I do an online painting demo now every Thursday night from 7 o’clock. The first painting we did was a few cottages on an old lane and I’m planning to give that away to a key worker.

“People are nominating others for it. Somebody on the front line will end up getting that painting. Every wee bit helps.”

The Kilrea man carries conversation with the relaxed confidence of a man who has found the holy grail of job satisfaction by turning his hobby into his occupation.

“I have done working on building sites, on farms and fruit picking, served my time as a butcher, but while I was doing that, I was always doing the odd wee drawing.

“It’s what I’ve always wanted to do. The dream was always to pack in the day job and paint full time, so I suppose I’m living that dream.”