A feature on the school's first senior title 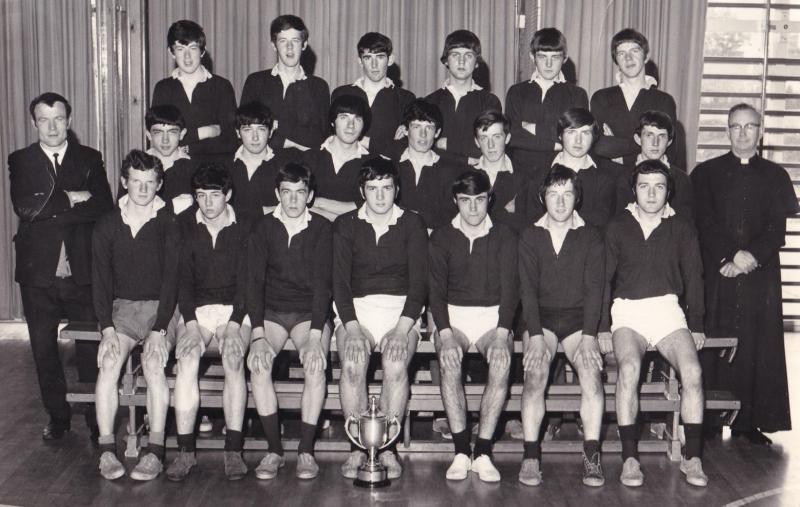 The name St Patrick's Maghera is synonymous with the MacRory Cup but that odyssey had to begin somewhere. They entered the MacLarnon Cup in 1970 and won it at the first time of asking. Michael McMullan caught up with Ballinascreen man Kenny Bradley to take a look back...

Kenny Bradley still vividly remembers the words of Master Brian McKevitt, as if it was yesterday.

The Louth man taught in St Patrick's Maghera in the early years, before later moving on to the Abbey in Newry.

Bradley and his mates were constantly told by McKevitt that St Patrick's Maghera should be making its mark on the Ulster school scene. He would tell them the Derry club scene was among the best in Ireland.

With hindsight, McKevitt was proven right. Derry clubs have cleaned up all over Ulster and St Patrick's Maghera would amass 15 MacRory Cup titles since their first in 1977. They sit just four titles behind St Colman's, who lead the roll of honour.

The adventure had to start somewhere. Someone had to break new ground. With Sean 'Spud' Murphy in charge, St Patrick's Maghera entered the MacLarnon Cup in 1970 and won it at the first time of asking.

It may be the forgotten team in that long illustrious list of successful teams on the corridor walls of St Patrick's but, this group was indeed special.

To mark the Golden Jubilee, the panel were due to come together earlier this month, for the first time in 50 years to mull over their memories.

The recent coronavirus outbreak, put their plans on ice, but such was the enthusiasm for the initial idea, it has been put on the back burner until later in the year.

On answering the phone in his Sixtowns' home last week, Kenny Bradley was in his element, sifting through various clippings and artefacts. History, not necessarily sport, is in his DNA and all the memories from the year Maghera took their infant steps into Ulster Schools' football have given him another spark.

The school opened in 1963 and this was now the first A-Level class to reach Upper Sixth.

“We wouldn't have been allowed into the MacRory because you would have to have qualified through the MacLarnon,” Bradley outlines.

Before that, the late Frankie Kearney and Brian McKevitt were involved with the youth teams.

Ironically, when Maghera reached the semi-final of the MacRory in their first year, 1971, it was Abbey – with McKevitt at the helm – who ran out narrow winners.

Before that, came the gradual building blocks towards the class of 1970 setting an example for others to follow.

There were 120 boys in the first register in September of 1963 and it built up over the next five years. It saw the school begin to field against local teams: St Colm's Draperstown, St Pius Magherafelt and St Patrick's Dungiven.

“Once we went above that, we moved into the Ulster Colleges' competitions,” Bradley added.

County minors Frankie McCotter, Mickey Moran, Eugene Laverty, Vincent Conway and Brendan Kelly were back on board. In from St Malachy's Belfast came Cargin duo Packie McGuckin and Pat O'Neill, who was on their winning Rannafast team.

In the MacLarnon Cup, Dungannon Academy, St Patrick's Omagh and St Mary's Irvinestown all withdrew from Maghera's group, left them with just Omagh CBS to play-off with to decide semi-finals pairings.

Scores were hard to come by on a frosty December morning on Omagh's home pitch, as Maghera were 0-8 to 1-3 winners.

Central to the win, as Kielt outlined, was midfield control from Conway and Laverty, helping set up scores for Liam Harbinson and Brendan Kelly.

“Omagh had a great team back then,” Kenny Bradley recalls.

“Their goalkeeper, Ciaran Harte, would have played for Tyrone, in goals as their reserve 'keeper.

“The full-back was Willie McKenna, a brother of Eugene and Dessie McKenna. He went on to work over around Drumsurn, in the forestry. He played minor and U21 for Tyrone.”

With challenge games against local Glen and Slaughtneil teams, St Patrick's prepared for their semi-final with St Patrick's Armagh, which Bradley describes as a 'tight enough game'.

In difficult conditions in Coalisland, it was a 1-2 brace after half-time that saw them book a place in the final against Omagh, who had defeated Dundalk on the other side of the draw.

Given it being their first final and Omagh having played in the 1969 MacRory semi-final, Kenny Bradley 'didn't really' feel Maghera were going in as underdogs.

“We knew we had a good team. We had played MacRory teams early on (in the season). We played Malachy's (Belfast) in a friendly match down in Newbridge. We were short a couple of good players that day and they beat us by a point. It was a good tight game. We knew then, that we were as good as anybody.

They also gave St Columb's Derry a 'good tight run' at the start of the year.

“We had boys like Eugene Laverty and Mickey Moran. Eugene Laverty would've ran through a hedge, that was the type of him – a big strong player and very dominant.”

The sides were level at half-time in the final and when Pat O'Neill edged Maghera into a 1-3 to 1-2 lead early in the second half, they never looked back.

There was no All-Ireland series for the MacLarnon champions at that time.

“I have no doubt that we would've won it, we were good enough and we had the stuff,” Bradley said, with confidence.

Bradley, Vincent Conway and Brendan Kelly left the post-match celebrations and swiftly headed for the Coalisland dressing rooms. At that time, in the Derry league, Ballinascreen fielded three teams – one in each division – and on the day of the final,

“We headed into Neilly's (Brendan Kelly) father's car and headed to Ballinascreen to play against Castledawson in the league.

“We missed the celebrations and I remember thinking afterwards, 'were we feckin' mad in the head'. You'd think there would never be another game, but that was how mad we were to play football.”

The team stopped in what it now called the Central Bar in Cookstown for a meal on the way home but Principal Fr Donnelly was far from happy with the 'Screen exodus.

“He took Neilly out of class the next day. He gave him six slaps and a 100 lines for not showing up at the meal. I don't know if he was telling the truth or not,” Bradley jokes.

“We didn't worry too much about the celebrations back them. As Willie McKenna (Omagh player) later mentioned to me....you played a match and when it was finished, if there was another one, you went and played that, you never questioned who won or lost.”

Behind the success was Sean Murphy, who had been in the school five years, who volunteered to take the team.

“There was nobody busting themselves to get taking teams,” Bradley highlights.

“He was the kind of man that called a spade a spade and we liked that about him. He hit the right note, there was no fuss with him, he just got on with it.

“There were no sophisticated tactics, he picked the team the way he wanted and the boys did the rest.”

Another change Bradley notices now, how more accessible school sport is and how much easier it is to stay behind for training.

“There were no taxis in our day. I live up at the top of the Sixtowns, beside the Shepherds' Rest, and you had to thumb it home.

“It was hard to stay for the training and that's why we could've been a lot better if we had the modern-day facilities with boys being dropped off (home). Everybody would've been training all the time.”

Bradley points to St Columb's being the team at that time but were 'on the wane'.

“The South Derry boys were starting to come to Maghera, and so too the Dungiven ones. They (St Columb's) were still the big fellas but it wasn't long before Maghera overtook them.”

But it was the class of 1970 that was the real change in momentum.

When the coronavirus crisis subsides and life returns to relative normality, Kenny Bradley will get the wheels in motion to unite the team, who are all in 'good health'.

“They all went on to have good careers and good jobs in life. You'd have to say, they all fared fierce well for themselves. It's tara how quick the times goes past...it's a flash.

Brian McKevitt knew his football. Every journey begins with a single step and the team of 1970 were the pioneers of Maghera's summit to the top of Ulster schools' football.