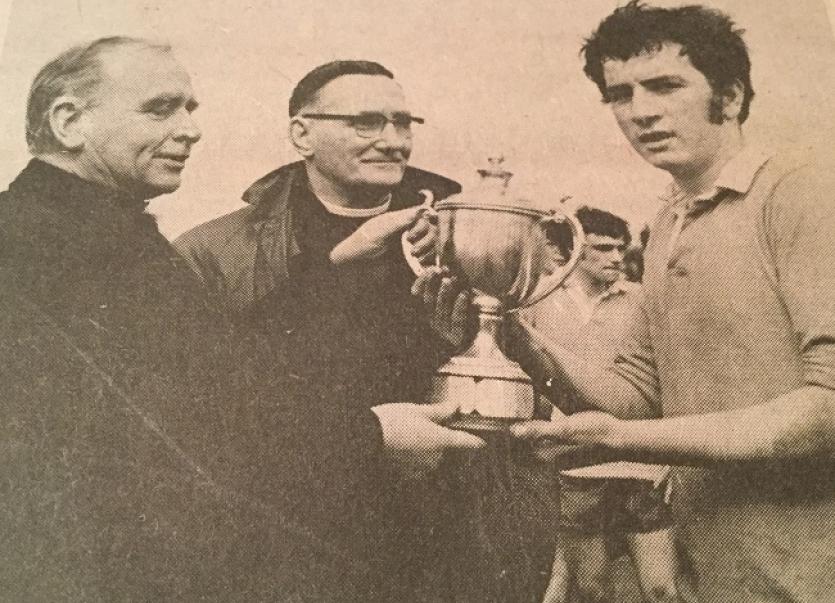 In alphabetical order, the tenth name of the 21 boys on page one of St Patrick's Maghera's first ever register, on Monday, September 2, 1963, was that of Eugene Laverty.

Seven years later, he would be the first Maghera senior footballer to lift silverware after their MacLarnon Cup win over Omagh CBS.

Back to back Ulster minor winner Laverty played on the Derry senior team of the mid-1970s, picking up two senior medals.

His first cousin and godfather Colm Mulholland, who turned 90 in December played for Derry in the 1958 All-Ireland final.

Laverty's Derry senior debut came by chance. Jim McGuigan was organising the transport to Sligo for the opening game of the pre-Christmas section of the 1970/71 league.

He asked Laverty if he wanted to go to the game on the bus, just to watch. After all the various pick up points passed, there were only 15 players on board, including Anthony McGurk who was nursing a sore ankle.

“Do you want to play,” McGuigan asked in the direction of Laverty. Before he had a chance to reply, manager Paddy O'Hara told McGuigan to get him togs and socks a pair of boots 'from somewhere.'

“So there I was playing my first game. I remember the game was moved to Tobercurry, because of a waterlogged pitch. We won the game and remember Michael Kearns was playing for Sligo.”

It would be a further four years before he would make his championship debut. During that time, as a student at St Joe's in Belfast, he won an All-Ireland Fresher medal and three Ryan Cup (university league) medals. Regrettably, despite having a team capable of winning the Sigerson, the 'Ranch' weren't permitted to enter.

With his native Lavey, he played for over 20 years, winning two championships, but for the last 18 years he calls Portrush his home.

Every day, he will walk down the Coleraine Road to the shop, passing back over from County Antrim to his native Derry. He will pass the home of John Eddie Mullan, a league winner with the Oakleafers in 1947, and the pair would often chat.

Last week, when Laverty's phone rang and the opportunity arose to rake up the memories of 1970 again, there was an excitement in his voice.

Last year he had the 50th year gathering of the 1969 minor winning team that were defeated by Cork in All-Ireland final.

“Brendan Kelly, Mickey Moran, Vincent Conway, Frankie McCotter and myself were on that team,” Laverty remembers.

“The MacLarnon Cup final was a really good game of football compared to the MacRory which was dour and not very interesting.”

Martin O'Neill, who would later that year play alongside Laverty for Derry minors, played on the winning St Malachy's team, managed by Phil Stuart, that lifted the MacRory Cup.

“Hugh Cudden, our goalkeeper, is now in Canada and Liam Harbinson is away in South Africa or Zimbabwe and Frankie McCotter lives in London.”

Laverty scored one goal in the final with Harbinson, who played some Irish league soccer, notching the other, after dribbling clear of Omagh defence.

“Liam is a relation of Sean O'Connell and had a swagger like Sean O'Connell. He was a very good soccer player, as was Mickey Moran. Playing in the school playground, you would know they had a bit of skill from soccer about them.”

In those days, as Laverty remembers, organised games against other schools didn't come into vogue until 'third or fourth year'.

“What struck out for me, when we started in St Pat's Maghera, there was only 120 pupils at it. We went into the assembly hall, there was no floor in it, we were standing on the grass as the school wasn't totally finished.

“Frankie Kearney and Brian McKevitt took us in the early years. Then we had Sean Murphy and Eamon Small coaching us as well.”

There were few highlights of the football in the early years but soon there was a greater enthusiasm and more boys were taking an interest.

Frankie Kearney left the staff, going to St Paul's Kilrea. McKevitt went back to teach in the Abbey.

Sean Murphy, with Jim B Bradley assisting him, took over the running of the senior team.

“It was brilliant,” enthuses Laverty. “We were the first senior team and got Maghera into the MacRory. Adrian Boyle was still at Maghera the following year and remembers playing in the MacRory.

“It was a fantastic feeling to win it and Omagh had a great team at that time. It was a ding dong game. We had a good team and were all very determined to win on that day.”

Laverty was the captain and refers to manager Sean Murphy's qualities in the classroom being transferred to the dressing room.

Another ingredient for success, which Laverty mentions, was the school basketball team. Under the watch of Charlie Murphy, they won the Ulster title, with a 32-27 win over Methody.

“It was up in San Souci Park, in Queen's,” he adds, with the details floating down the phone-line as if it were yesterday.

There was a hiccup before the final. Maghera didn't have numbers on their vests and wouldn't be allowed to compete until a local intervention saved the day.

St Colm's Draperstown's U14 team were there and coach Seamus Kelly, loaned them their vests. Kelly, who passed away recently, would have an influence on Laverty's Derry career under Frankie Kearney's tenure.

“Seamus was a shrewd man and was one of the mentors of Derry teams of 1975, 1976 and 1977. Sean O'Connell would have been helping out with training – while still playing – and big Liam Hinphey was the motivator. Seamus Kelly was the tactician, he was very quiet but was shrewd operator.”

“Methody came out in silk tops and togs, with all their fancy numbers. The vests we got were as tight as a fiddle string and too small for us.

“There was a Methody boy who got a few tackles that day, that weren't part of basketball, but that's another story,” added Laverty, with a hearty laugh.

On the basketball starting team of five, were Mickey Moran and Eugene Laverty. Tommy McCloy of Lavey was another footballer but would leave school before the MacLarnon winning season.

Also at the school during that era was current Lavey man Paddy Shivers, who went on to play for Derry as well.

Laverty 'can't understand' why Shivers wasn't on the Maghera team at that time.

“He was a good footballer. He coached the team and played on the Lavey team for years. He was a PE teacher up in St Colm's in Draperstown, took teams and did very well.”

Laverty never forgot Shivers.  He knew his footballers and, especially, a midfielder when he saw one.

Winning captains' names will continue to go up on the walls of St Patrick's Maghera,  but Eugene Laverty will always be the first.  From the team on 1970, who set the standard for others to follow.

Covid cases drop in Derry but Altnagelvin currently has 67 inpatients

Magee students get creative for first ever Halloween at home celebration

The PPE was dumped at Trench Road in the Waterside.