The other side of the line

Sean Marty Lockhart looks back at captaining Maghera to glory 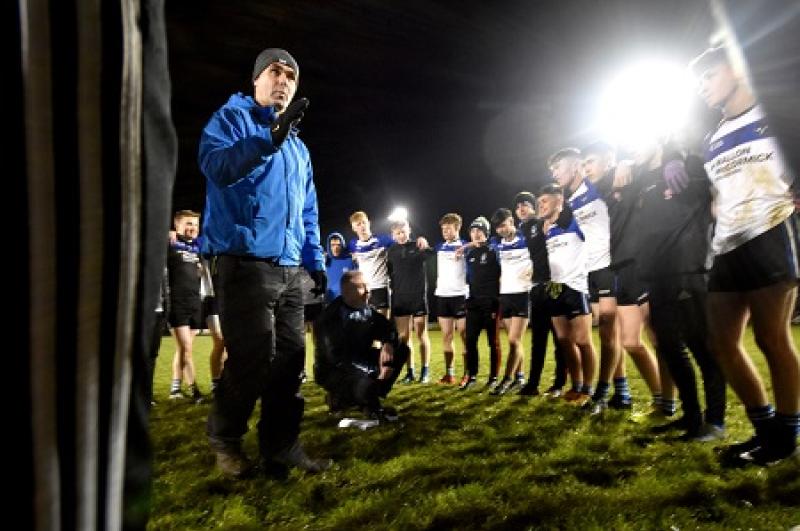 Some 25 years after captaining Maghera to MacRory glory against St Colman's, Sean Marty Lockhart is on the other side of the line.

Michael McMullan sat down with him to chat MacRory and also dug up a few insights from others on Lockhart's days in the blue, white and black.

'Leader' and 'perfectionist' were two of the words the 1995 edition of Maghera's school magazine, 'The Patrician', used to describe MacRory winning captain Sean Martin Lockhart.
In school tradition at the time, every senior panel member would have a short synopsis penned about them. Lockhart was described as one of the most 'complete' colleges' players for a 'long time'.
“He was as solid as a rock, as you'd imagine and he was always on the dangerman,” adds Padraig McKaigue who, with no previous goalkeeping experience, played behind him for both Derry minors and Maghera.
McKaigue also points to a 'roasting' Lockhart dished out to current Cavan minor manager Mickey Graham in an Ulster minor semi-final.
Damian McErlain, who played on the 1995 team with Lockhart, rated Maghera's full-back line that year – John Heaney, Niall Farren and Micheál Kelly – as the best he has played with or managed.
“Nobody will ever appreciate how good they were,” he states.
And then there was Lockhart. McErlain remembers the 'No Fear' t-shirt Sean Marty would often wear and the jovial Niall Farren giving him plenty of stick for wearing it.
“You can practice, practice, practice – I'll still beat you,” read the slogan on the back.
It was made for him reckons McErlain, who played at centre-forward. His battles with Lockhart 'at least once' a week at training were 'savage'.
“Some days you just never got a ball,” McErlain remembers. “Then, you'd have a good day and hit 1-1 or something. You knew about it the next day – he took to you like a day's work.”
Now, 25 years after captaining Maghera to a 12-point final win over St Colman's, Lockhart leads Maghera into another final against their Newry rivals.
The return nearly didn't happen. Lockhart had initially planned to leave school after fifth year to become an electrician. There were also murmurs of a route into accountancy.
“I would never have saw myself as a teacher or a manager. Back then, I had a job in an accounts office,” Lockhart recalls, but now there are no regrets.
“It's a flash,” said Lockhart, of his memories. “I am talking to you about this year's final...that was our year and I can't believe it is 25 years.”
Back in the day, the careers' room was the hub for pre-game meetings. Adrian McGuckin would address the panel with a detailed and pristinely bound portfolio, specially commissioned for every game.
It had everything from bus times to warm-up details. From a team list to a synopsis of the other team's strengths and weaknesses. There was a plan for playing with an extra man or having a man sent off. Every base was covered.
Now, that corner on the second floor of the three-storey building houses the school staffroom. The faces have changed, but constant murmur of football chat competes with the aroma of hot tea.
Lockhart's MacRory career spanned three and a bit seasons. In 1992, as a fourth year, he was added to the panel towards the end of the campaign. The following year, he was corner-back. They needed two games to get over a St Patrick's Armagh attack that had the bustling Des Mackin on the edge of the square.
“Dessie's gonna get you,” came the chants in the direction of Seanie McGuckin, who would win the battle. The final was a different story against St Colman's. Mackin's county minor team-mate Diarmuid Marsden missed a penalty, but the Violet Hill men still took the cup, on their way to a Hogan title.
In 1994, Seanie McGuckin was now the fulcrum of the attack, leaving Lockhart to wear the number three jersey. Maghera went one better with St Patrick's Armagh in the Athletics Grounds. Lockhart gave away height and weight to full-forward Conor McGurgan, but not much else in assured performance.
Another masterclass, as McKaigue put it, came against Pat Spillane's nephew (Eamonn) in a landslide win over St Brendan's Killarney to set up a date with St Jarlath's Tuam and a chastening 3-11 to 0-9 defeat.
It was a team that included Michael Donnellan, Padraig Joyce and Tommy Joyce, John Divilly, Declan and Tomas Meehan.
“We had no specific plan to go for goals, but we were encouraged to go for them if they were on,” reveals former Donegal player John Haran, who was on that Jarlath's panel.
“If you ever watch that game on video, Maghera actually had a lot of possession and missed a lot of chances. History is cruel, as it looked like an easy win.”
Full-forward for Jarlath's was underage superstar John Concannon. He scored 1-4 that day, but failed to reach the same inter-county heights as the rest of the crop. Haran's St Eunan's team-mate Kevin Winston lashed in the first goal, before the Concannon show kicked in. It was a 'humbling' hour for Lockhart.
”All through that year, there was a chant ' you'll never beat Sean Lockhart' but after 10 minutes he (Concannon) had skinned me, scored 1-1 and the chant just stopped.”

It was his last chance at a Hogan Cup medal. The following year, 1995, he was one of six players, including starters David O'Neill, Mark Diamond and Fintan Martin, who were overage for the All-Ireland series. Panellists Sean McPeake and Dominic Lynn, who would've been in contention, were also ineligible.
The MacRory would be his last hurrah. In the quarter-final against St Macartan's Monaghan, with Lockhart now as captain, goals from David O'Neill and Mickey Gribbin put them on their way.
Six days ahead of the semi-final, Maghera – with eight starters missing – defeated St Jarlath's Tuam, who had 11 of the Hogan winning team on view, in a low-scoring challenge game in Aghadrumsee. It was the perfect ending to the preparations.
“We had a strong upper six and a strong lower sixth group. We were coming off the back of winning the Rannafast and there was great character in our team with a never say die attitude,” Lockhart feels.
“We played Abbey (in the semi-final). They had John McEntee, Tony McEntee, Enda McNulty and Aidan O'Rourke at a snow-swept Armagh.”
Leading 0-7 to 0-0 at the break, Maghera had to face the elements in the second half but a Mark Diamond thunderbolt ot the net, into the driving snow, quashed any Abbey hopes.
Now preparing for the final as a manager, Lockhart can now fully appreciate the support structures from his playing days.
“Back then, as a player, you are in a wee bubble and Adrian protected us and he kept our feet firmly on the ground
“Now as a manager, you have to organise food, travel, promotion and the media, so you see the whole package. But one thing you do see, you see the impact on the school. As a player, you thought it was about us in the team. It didn't go totally to plan for Lockhart in 1995.
“I remember breaking my finger the year before the final. I was playing pool with a few of my mates and we were just messing about.”
It didn't matter, the final was a walk in the park. Colman's got the first point of the game, the only time Maghera were behind all year. That was as good as it got for the Newry side. They failed to score for over three quarters of the game and Lockhart – who also kicked a point - was left to lift the cup.
It wasn't long until he received the call from Derry senior manager Mickey Moran. Within three years of leaving school, he would pick up an All-Ireland U21 medal and was full-back on the last team to win the Ulster SFC, in 1998.
He never gave Tony Boyle a kick in the Ulster final and combined with a performance on Padraig Joyce later in the year, he picked up an all-star.
It was a baptism of fire in the early seasons as an inter-county defender. He vividly remembers a league clash with Clare and a tough afternoon marking Gerry McInerney. Lockhart has never forgotten the name.
“I was wing-back and he scored 1-3 off me and skinned me. The older boys, like Henry Downey and Kieran McKeever, came over and said 'Sean Marty, you have made the county, your learning starts now'.
“I went back into full back and you had to educate yourself. You had collective training and there was the individual work yourself. I had plenty of battles with boys after it.”
Over the next week, Maghera's defenders don't need to look any further for advice on how to curb the St Colman's attack.
As our conversation finishes, Liam Kielt appears on the scene. After a brief, general, natter on football, his former Corn na nÓg manager enquiries about the Newry challenge. Lockhart recites a litany of names and dangers.
“They have a good forward line,” was the sweeping statement centred on next Tuesday's task
The preparations had long since begun. The 1995 school magazine wasn't far off the mark. Leader. Perfectionist. And so the cycle continues.