Why do people tell ghost stories at this time of year? 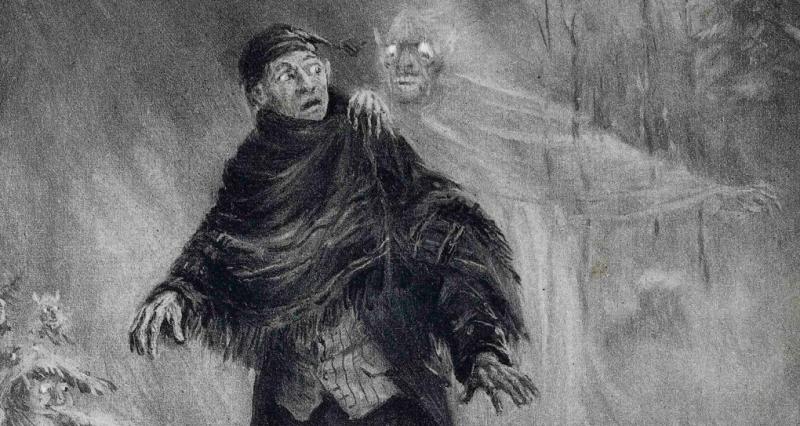 People have been telling ghost stories at Christmas for thousands of years.

Telling ghost stories at Christmas and the New Year is a tradition that long precedes Charles Dickens 'A Christmas Carol' by many hundreds of years.

Ebenezer Scrooge wasn't the first fictional character to see ghosts at this time of year. In fact the tradition probably goes back further than Christmas itself. As the nights grow long and the year creeps towards its close it's a natural instinct that people gather together. It's also natural that this time makes us think of people and places that are no longer here.

These thoughts have often morphed into tales based on what we encounter at this time of year - winter, death and the eventual rebirth experienced in spring.

In Europe this was usually connected to the pagan rituals surrounding the winter solstice known as Yule. The shortest and darkest day of the year was viewed as a time when the dead would have access to the living.

The telling of tales at Yuletide began to decline as TV took over as the main form of household entertainment, but it must also be remembered that when Dickens published 'A Christmas Carol' in 1863 the tradition of Christmas itself was also in decline. In fact, for most people in that era Christmas was a working day because the Industrial Revolution meant fewer days off for everyone. As a result, Christmas was considered relatively unimportant and no one really complained.

The beginning of disregarding Christmas had come courtesy of Oliver Cromwell around 150 years earlier. The puritanical Lord Protector of England who in the 17th Century was “on a mission to cleanse the nation of its most decadent excesses.”

These excesses unfortunately included banning Christmas celebrations, its ghostly tales and traditions with even carols making his draconian hit list.

Oliver Cromwell is of course remembered in Ireland for his other exploits including the deaths of thousands of people as the result of his orders. But despite his best efforts he failed to quell the traditions of folklore carried over from pre-Christian Ireland.

In the Irish tradition, ghosts are called taidhbhse or tais and live in a place halfway between this life and the next. The spirits are held here by some earthly affection or unfulfilled duty or anger against the living.

Those who die suddenly, more commonly than others, are believed to become haunting Ghosts. They go about moving the furniture, and in every way trying to attract attention.

It was also believed that when the soul has left the body, it is drawn away, sometimes, by the fairies.

Such souls are considered lost. If a soul eludes the fairies, it may be snapped up by the evil spirits.

The weak souls of young children were especially in danger.

In western Ireland for example, people sprinkled the threshold with the blood of a chicken when a very young child died so that the spirits may be drawn away to the blood.

A ghost was also compelled to obey the commands of the living.

One old tale said, 'the stable-boy up met the master going round the yards after he had been two days dead, and told him to be away with him to the lighthouse, and haunt that; and there he is far out to sea still.'

Oscar Wilde's mother who studied and wrote about the supernatural thought it was only spirits who were too bad for heaven, and too good for hell, who were caught halfway between paradise and damnation.

It was also thought that the souls of the dead sometimes took the shapes of animals. They will sometimes take the forms of insects, especially butterflies. If you see one fluttering near a corpse, that is the soul, and is a sign of its having entered upon immortal happiness. The author of the Parochial Survey of Ireland, 1814, heard a woman say to a child who was chasing a butterfly, "How do you know it is not the soul of your grandfather".

Spirits who remain inside houses can also take on many shapes, including that of the elf and sometimes also of a rat, cat, or black dog.

In their natural state they are invisible to people, but they can become visible in these forms. They make a lot of noise in the house at night and live between the walls, in the attic or in the cellar, in the stable, in the shed, sometimes even in a large tree beside the house.

These ghosts are not considered particularly intelligent, and remain friendly as long as they are treated well. They like to tease lazy people by pulling the blankets off their beds and sending icy drafts through the room. They also delight in knocking over milk pails and keeping people awake by constantly tapping on the walls. When made very angry, they become malevolent. Their noise making becomes unbearable; they throw stones, the cattle become sick, drought or cold weather or continuous storms occur.

They leave the house or farm only when it has been totally overwhelmed by disaster and is lost.

And, there is a well-known local wintry ghostly tale which refers to The Lady in the Snow which is said to have happened on the outskirts of Derry.

The story is of two children, a brother and sister who were playing in the snow near a small stream near Enagh Lough. They were making a snowman and gradually they moved closer and closer to the water until they were standing on the ice.

A woman dressed in a grey coat and a fur muff approached them, warning them of the danger.

She coaxed them back to the bank just as the ice began to crack. She asked where they lived and she advised them to go home. The little girl asked if she could walk home with them and if she could put her hands in the muff to make them warm. The woman put the muff on the little girl and they chatted as they walked. She told them that she had a little girl who went into the water through the ice and warned them to be careful. At the gate she took her muff back and watched them being greeted at the door by their mother. They were both pointing at the lady and gesticulating but the mother saw no one.

However she went to the gate because the children were so convinced that a lady had walked home with them. On the snow there were only the footprints of her children.

When the snow melted a muff was found near the lake. The little girl knew it was the one that the lady wore.