Derry City Cemetery Series: The World War I sinking of the RMS Leinster 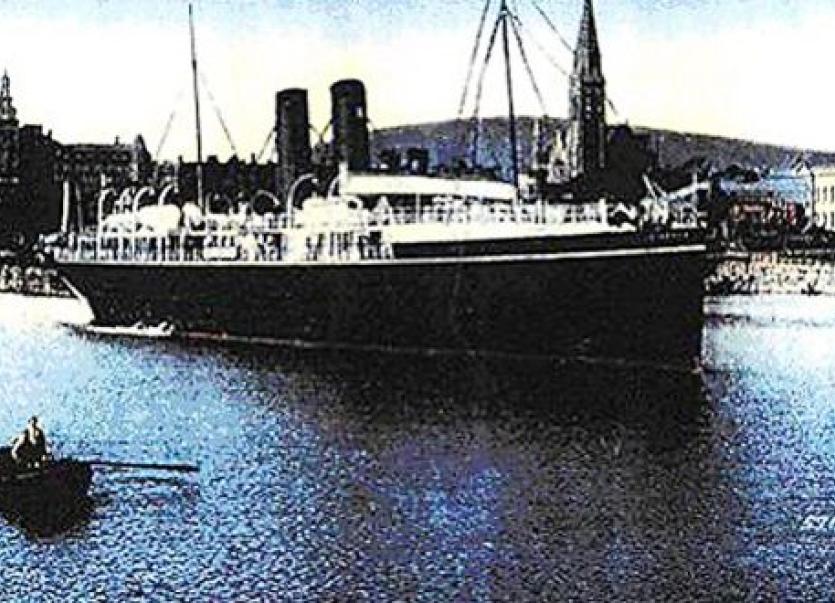 The RMS Leinster was sunk in October 1918

Only one month before the conclusion of World War I, the action of a German U boat off the coast of Ireland caused a huge loss of life in the Irish Sea. And, among the passengers of the ill-fated ship were people from Derry.

The Royal Mail steamer (RMS) Leinster was an Irish ship run by the City of Dublin Steam Packet Company and served as the mail delivery boat between Dún Laoghaire and Holyhead. But, en route to the Welsh port on October 10, 1918 it was torpedoed by UB-123 around 8 kilometres east of the Kish Bank.

Figures about the exact number of those who perished vary to an extent. But, some suggest that the figure exceeded 560 meaning the loss of RMS Leinster representing the largest loss of life ever in the Irish Sea.

It was in 1895 that the City of Dublin Steam Packet Company ordered the construction of four steamers on behalf of the Royal Mail Service. The ships were named after the four provinces of Ireland – RMS Leinster, RMS Connaught, RMS Munster and RMS Ulster.

The Leinster weighed over 3,000 tonnes and was capable of a speed of 23 knots or just over 40 miles per hour. Built by Laird's shipyard in England the ship was powered by two separate four cylinder steam engines. And during WWI, the boat was armed with one twelve pound gun and a pair of signal guns.

The log of the RMS Leinster recorded that there were 77 crew and 694 passengers under the control of Captain William Birch when the ship went down. It was not the first time that the mail boat had been attacked during the Great War but on the previous occasions the torpedoes missed their intended target.

From the outset of the war, the Royal Navy had blockaded the North Sea which was Germany's access to the sea lanes of the world. The supply of food and other resources to Germany was dependent on access and as such the need to break the blockade was paramount amongst the country's military objectives.

Avoiding the blockade was achievable by the use of submarines. The U-boats regularly attacked merchant shipping bringing supplies into Britain. However, when Germany sank the Lusitania in 1915, then the neutral USA protested and as a result unrestricted attacks on merchant ships were suspended.

Then in 1916, Germany failed to break the British blockade in an open naval encounter at the Battle of Jutland. The following year, 1917, in an increasingly frenzied attempt to win the war, Germany resumed attacks on merchant shipping. After this point, merchant ships were sailed across the Atlantic in convoys backed up by the Royal Navy. When the USA joined the war that year and faced with attempting to attack escorted merchant boats, the German's turned their attention to waters around Ireland and Britain where ships often went unescorted.

Amongst those onboard the Leinster on October 10, 1918 were over 100 civilians, 22 Post Office workers in the mail sorting room and almost 500 military servicemen from the Royal Navy, British Army and Royal Air Force. Also on the ship were nurses from Ireland, Britain, Australia, New Zealand, Canada and the U.S.A.

At 10am that fateful morning passengers reported that a torpedo had been fired at the port side of the boat but passed harmlessly in front of the bow. However, a second missile followed quickly and hit the same side of the ship in the vicinity of the mail room.

As Captain Birch ordered the ship to make a U-turn in an attempt to return to Dún Laoghaire, a third torpedo hit causing a massive explosion and the RMS Leinster sank quickly.

Despite the rough conditions the crew managed to launch a number lifeboats to which some passengers managed to cling to. Survivors were picked up by HMS Lively, HMS Mallard and HMS Seal.

Those lost included the daughter of the Duke of Abercorn, Lady Alexandra Phyllis Hamilton who had been among a group of the Abercorn family who had been visiting her brother-in-law Ralph Francis-Howard 7th Earl of Wicklow. She was also the cousin of Winston Churchill and the great grand aunt of Princess Diana.

Lady Hamilton was travelling back to England in the company of the family cook, Mrs Martha Bridge and servant Eleanor Strachan. It was later reported that the aristocrat gave her life jacket to her servant and said 'I'm a strong swimmer'. However all three women drowned with only the remains of Martha Bridge being recovered for burial.

The sinking of the Leinster also claimed the life of 21-year-old Josephine Carr, the first member of the Women's Royal Naval Service to die on active service. The Wren was a shorthand typist from Cork.

But, the RMS Leinster disaster also had direct connections to Derry. Amongst those who perished at sea where Robert Jocelyn Alexander, the third child of Mrs Cecil Frances Alexander the writer of All Things Bright and Beautiful and Once in Royal David's City and the once Church of Ireland Bishop of Derry and Raphoe and later Primate of All Ireland the Most Reverend Sir William Alexander.

Robert who was aged 66 at the time of his death was an Oxford graduate who had married Alice Rachel Humpreys in January 1876. Their only child, also William Alexander, had died in infancy. Robert Alexander lies buried in Derry City Cemetery around 50 yards from his famous parents.

James McCarron was born at Derry's Stanley's Walk in 1851 and after training as a tailor came to the fore as a leading figure in the Amalgamated Society of Tailors and Tailoresses. At the start of the 1890s he became secretary of the local branch and was jailed for his part in a strike.

Now the most prominent member of his union across Ireland, McCarron was elected to the Parliamentary Committee of the Irish Congress of Trade Unions and was returned each year from 1894 – 1909. He served as president three times in 1899, 1907 and 1910.

Between 1899 and the 1920s the labour movement in Ireland was staunchly militant and Derry as the epicentre of the shirt making industry in Ireland and far beyond, and also with significant work forces linked to distilling and shipbuilding was at the heart of demanding better worker's rights.

In 1901 James McCarron was elected to the city's corporation initially as an exponent of land nationalisation the core aim of which was the abolition of landlordism. He later however joined the Labour Representation Committee and then the newly established Irish Labour Party. Alderman McCarron later became the party's group leader on Derry's corporation and also served as the Chairman of the Public Health Committee.

The Derry man, whilst an Irish nationalist, was also a strong defender of the role of British based trade unions in Ireland. The father of seven was highly respected by all the citizen's of his native city for his ability to unify them on issues of commonality.

McCarron's abilities as a representative of worker's rights saw him chosen to represent the labour movement at the Irish Convention of 1917 – 1918 that centred on the question of Irish home rule.

Alderman McCarron was travelling on union business to Manchester aboard the RMS Leinster when the ship was attacked. He was in the company of Patrick Lynch also a member of the Amalgamated Society of Tailors and Tailoresses, the President of Cork Trades Council and a member of Cork City Council.

Lynch was married to Elizabeth and they had seven children aged between one and 13 when he died. His body was recovered and he was buried at home in Cork.

Just four days after the RMS Leinster sank bow first to the depths of the Irish Sea U.S. President Woodrow Wilson sent a strong message to the German authorities who had been making overtures in the pursuit of a peace settlement.

He said: “At the very moment that the German Government approaches the Government of the United States with proposals of peace, its submarines are engaged in sinking passengers ships at sea.”

Following this,attacks on merchant ships stopped and on November 11, 1918 an armistice was signed.

The submarine that attacked the Leinster - UB123 - later sank after striking mines in the North Sea on its journey back to Germany on October 19, 1918 with the loss of all 36 crew including its commander Oberleutnant Robert Ramm.

In October 2018, 100 years after the sinking of the RMS Leinster, relatives of Alderman James McCarron, including some from the United States, gathered at Derry City Cemetery to mark the centenary of his death. And, in June 2019 a plaque commemorating the life of the union leader was unveiled at his former home at number 48 Stanley's Walk by representatives of Derry Trades Council.

After his death James McCarron's headstone was paid for from donations by many of Derry's leading figures and trades union organisations as an appreciation of his life's work.

The monument, in the form of a Celtic cross and made from Irish limestone, still stands 12 feet high. Designed and made by Mr J Shiels of Strand Road in the city it is artistically carved with polished limestone inserts and was originally enclosed with pall stones joined together with iron bars.

The epitaph on the gravestone of one of World War I's final victims reads: “Erected to the memory of Alderman James McCarron, of this city, drowned by the torpedoing of RMS Leinster off the Irish coast, 10th October, 1918.”