Visitors come from behind to earn point at Brandywell 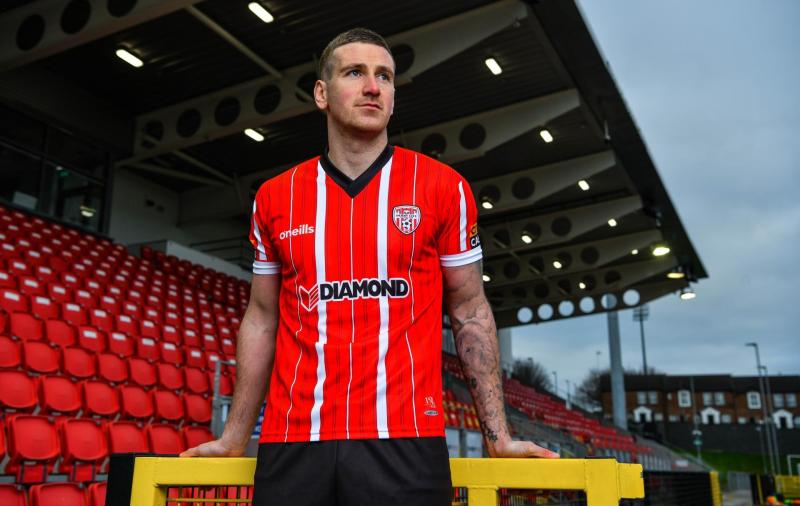 Patrick McEleney returned from injury to give away penalty.

Derry City's frustrating winless run was extended when their failure to take their chances ended in them being held by Drogheda United in their League of Ireland Premier Division clash at the Ryan McBride Brandywell Stadium tonight.

The home side were boosted by the return from injury of influential midfielder Patrick McEleney as they went in search a first win in seven league games, a run of results that- before kick-off - had saw them slip from the top of the table into third place, nine points behind leaders, defending champions Shamrock Rovers, and a point behind second-placed Dundalk.

McEleney was one of four changes manager Ruairi Higgns made from the side that drew 2-2 with Finn Harps before the international break three weeks ago when a Toal goal late into stoppage time earned the home side a share of the points.

Derry should have went ahead against Drogheda as early as the third minute but an unmarked McGonigle, the league's top goalscorer, fluffed his effort from just six yards out.

Fortune was on the side of the visitors in the 12th minute when an unmarked Dummigan headed straight at the keeper from a corner.

Shortly after, Patching shot over the bar when he found himself all alone just inside the penalty area.

Patrick McEleney showed great skill to create space for himself on the edge of the penaty box in the 25th minute but his weak effort was easily dealt with by keeper McCabe,.

Derry took a deserved lead in the 33rd minute when Mattie Smith forced the ball home from three yards out after a McGonigle effort was blocked on the goal-line.

Derry continued on the front foot after the break and a spectacular Patching effort from 25 yards whistled past a post three minutes after the resumption.

Keeper McCabe easily dealt with a 20-yard McGonigle effort in the 55th minute.

The home side paid the price for not taking theiir chances when the visitors drew level with a Williams penalty awarded after Patrick McEleney was adjudged by the referee to have pushed a Drogheda player in the penalty box.

Derry huffed and puffed untll the end of the game, never looking like getting the goal that would have ended the winless streak which has now extended to eight games.

The home fans roared for a penalty when McGonigle appeared to be brought down in the box during the two minutes of added time, but the referee waved appeals away.

Tonight's game was the third meeting this seaon between the sides, City having recorded a 2-0 home victory in March ahead of being held 1-1 at United Park in April.

Next up for City is an away trip to take on UCD next Friday.

Among those who watched the game from the Mark Farren Stand was Republic of Ireland international and former Derry City favourite James McClean who earned his 94th international cap in the Republic's 1-1 draw with Ukraine in the Nations League on Tuesday of this week.

Prior to kick-off, a minute's applause was held for legendary Derry midfieler Dougie Wood who passed away recently.

The Scottish defensive midfielder, who sadly passed away last Friday, aged 82, spent 11 years at the Brandywell, winning the Irish League title and Irish Cup and featuring in some of the club’s most memorable European games.

Having arrived at the Brandywell in 1961 as a 21-year-old, he went on to become a key figure in the club’s history as Candystripes' time in the Irish League came to an end.

He eventually left the Brandywell in 1972 to become player-manager at Athlone Town ahead of brief spells at Sligo Rovers and Shelbourne before he retired in 1978.

He was laid to rest earlier this week and was described as a ‘giant of Brandywell Stadium whose footballing talent brought ‘tremendous joy and happiness to the people of the city.’