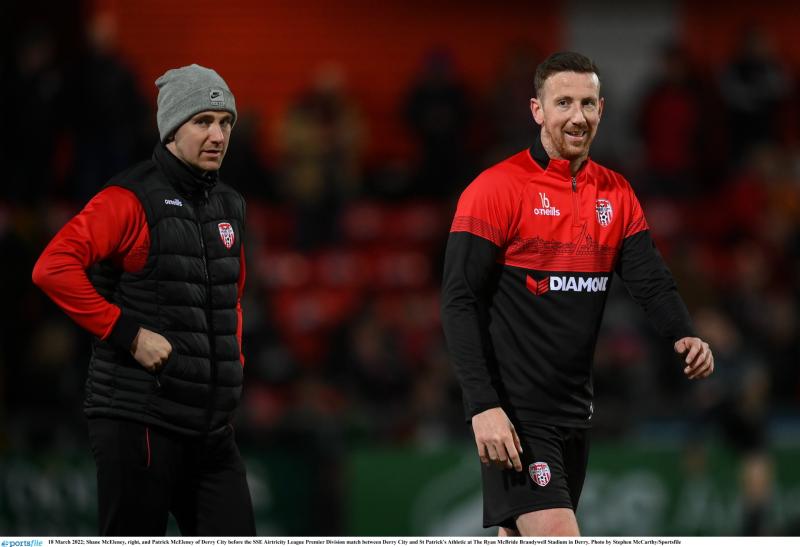 Brothers Patrick and Shane McEleney have been invaluable to Derry City since returning to the club.

Alan Reynolds has revealed that brothers Patrick and Shane McEleney are ensuring that none of their team mates get carried away as Derry City continue to impress at the top of the Premier Division.

With the Candystripes preparing for a two-game weekend against Bohemians and St. Patrick’s Athletic, all eyes are on the Brandywell, especially after 11 goals in the last two games for Ruaidhri Higgins’ league leaders.

It is nine wins from 13 league games so far, but with almost two thirds of the season still to play, there is a long way to go, with Reynolds revealing that the McEleney brothers, with 26 years of League of Ireland experience between them, are the ones with a valuable input in the dressing room.

“I have to say the likes of Patrick and Shane McEleney drive the group and there won’t be anyone getting carried away,” he said.

Derry City go into tonight’s game against Bohemians at the Brandywell filled with confidence, especially after a sensational display in their 4-0 win over St. Patrick’s Athletic last week. However, Reynolds and Higgins believe it still could have been better.

“The two of us looked back on it and probably typically from the staff we were saying we probably could have done this better or that better, and we spoke about it,” Reynolds explained. “But it was really good and credit to all the players because their attitude was first class and that’s the whole group because they are really good and want to do well. It was a good performance but we won’t get carried away.”

While Jamie McGonigle has taken the headlines in recent weeks with five goals in two games, it has been impossible to miss the spread of goals throughout the team this season, with City comfortably leading the scoring charts with 28 in 13 league games.

“In fairness to the manager he put pressure on all the players to score goals and not just leave it to Jamie,” Reynolds added. “The likes of Brandon (Kavanagh) hasn’t scored but he’s knocking on the door and he’s supplying a lot of the goals we’ve been scoring. We have a lot of good players at the top end of the pitch but that’s not to forget the players at the back who provide the platform, the likes of Shane (McEleney), Eoin Toal, Cameron McJannet and Ronan Boyce have all been outstanding. We are all in it and we win and lose together.”

With three games in eight days against Dublin sides Bohs, St. Pat’s and Rovers, it could prove to be a crucial spell in City’s season, but Reynolds insists that the fixture list brings excitement rather than fear.

“There’s no fear here playing against anyone,” he stated. “It’s something we addressed before the season started. We feel we are as good as anyone else in the league and when we are at our best we’ll be hard to stop. Down at Dalymount, I know we scored a last-minute winner but it was a tight one. Bohs have come a long way since and they have players like Junior back. It’ll still be tight that’s for sure.”

Meanwhile, there is great interest in developments at Shamrock Rovers this week after League One side Lincoln City made a move for manager Stephen Bradley. Whatever the outcome, Reynolds believes the Rovers boss deserves his chance in England.

“I think it’s great and I think it’s well deserved by Stephen Bradley if that’s what’s happening,” he said. “He’s been excellent for the last few years. Hopefully him going might upset them a little but, but he’s done a great job there. It’s great to see. This league has Ruaidhri also and Stephen O’Donnell and the list goes on. They are really good managers who know the game and we’ll se here that takes them.”