Declan Gallagher tells The Derry News how disorganised approach from stadium officials, heavy-handed policing and attacks from local Parisian thugs turned European final into one that will be remembered for all the wrong reasons 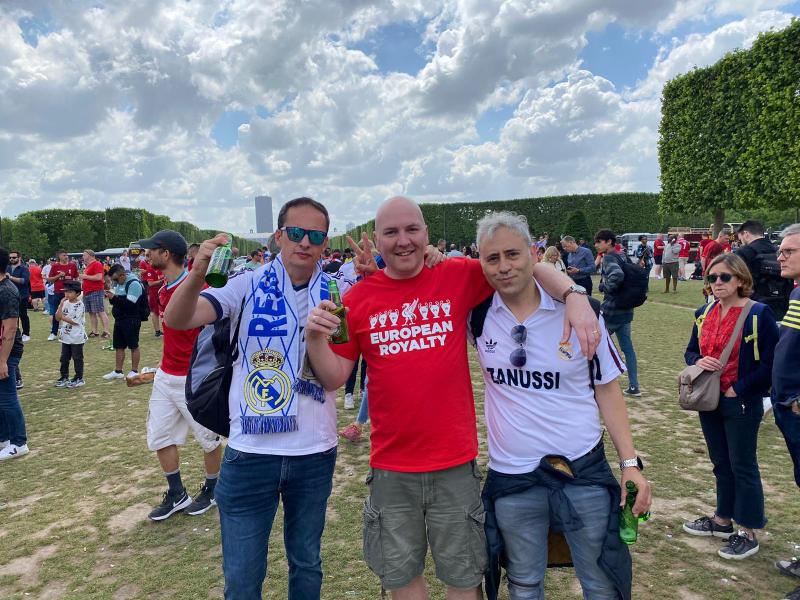 A Liverpool fan from Derry has told The Derry News of the French farce that took place in Paris before and after last Saturday's European Cup final.

Declan Gallagher, 44, a youth worker from Galliagh area of the city, travelled over to France of what was meant to be the trip of a lifetime as went to cheer on his beloved Reds against Spanish giants, Real Madrid.

Despite Liverpool creating a number of chances, it was the Spaniards who emerged victorious in a 1-0 win at the Stade de France.

However, disappointing though the result might have been, things had already turned very sour for Declan and the other Liverpool fans who had made the journey.

Disorganisation from the stadium's security ensured thousands were made to queue outside the ground – despite having arrived hours before the 9pm kick-off.

Not to mention the French police's heavy-handed approach as Liverpool fans were sprayed with pepper spray and had tear gas fired at them.

All this while local thugs from the St Denis area where the stadium was situated were assaulting and robbing Liverpool fans with Declan himself almost having his wallet stolen.

Yet hours before, the day had been going so well with a friendly atmosphere being shared by both Liverpool and Real Madrid fans.

Declan said: “On the day itself, everybody was in great spirits at the fan park. Everybody was just mingling and having the best time of their lives.

“We knew with the amount of people there that we needed to leave early to get to the game. So we started to make our way to the ground around quarter to five.

“We got the train and there was also a lot of confusion because the station we needed to get to was closed and so we had to get off at another station.

“When we got out the train, we heard people talking about their phones and wallets being stolen. So there was some fear and trepidation just before you got to the stadium.

“On our way to the stadium, we noticed that most of the Liverpool fans were either there already or on their way to the ground. We got to the turnstiles and there were a lot of locals mingling with fans.

“One supporter said to me, 'watch your pockets'. So, with me having my wallet in my right pocket, I stuffed a flag into my pocket and on top of my wallet – just to stop it being taken because I would know if someone was trying to get a flag out of my pocket.

“Sure enough, I felt a tug of the flag in my pocket. I turned around and says to the boy, 'get out of my sight – or words to that effect'.

“Not long after, the police moved two vans which closed the space that fans had to go through. It also slowed down the process of getting fans into the ground.

“We got our tickets checked – outside the stadium. We thought about going for a beer but were told we needed to keep going into the stadium – this was around ten past six.

“We got into the ground, and made our way to the concourse to get a couple of pints from the (refreshment) kiosks. From the concourse, you could see all the fans queueing up to get in. 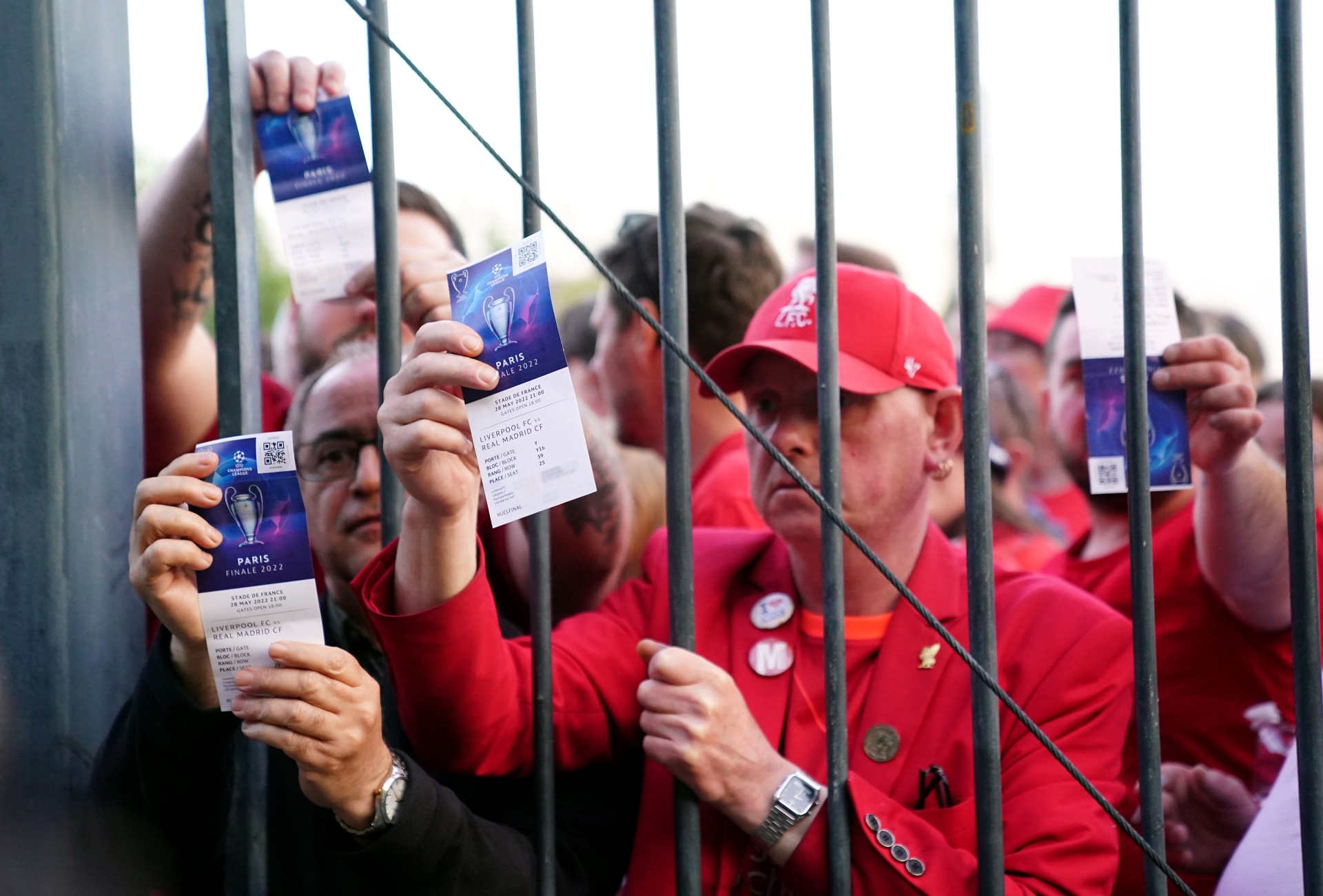 Despite having valid tickets for the Champions League final, Liverpool fans were kept waiting at the turnstile for a number of hours.

“There were thousands of fans behind us so the later claim of the game being delayed because the fans were late was not correct – we were all there in good time.

“I was in my seat when the screens inside the stadium flashed up 'game delayed to due late arrival of fans'. So I went back to the concourse to take a look and see what was happening.

“The fans were still outside the turnstiles. Their tickets had already been checked by a cordon set up earlier on the approach to the ground. So this was a case of the fans just not being allowed in. Despite this, the fans were very calm but the riot police still came out. There was nobody jumping queues – the fans were patiently waiting to get in.

“So those fans waiting at the turnstile all had valid tickets and were waiting to have them checked again. That's what happened to us and we were assuming that's what would be happening with them.

“With the police, to be honest I wasn't fearful when I got into the ground – I was more mindful of pickpockets. What concerned me was the locals mingling in with the fans and getting in. There were people getting their phones and wallets stolen by them.”

The game came and went but the horror from earlier re-emerged as the local thugs returned to attack and rob fans with the police seemingly disinterested in doing anything except fire tear gas at supporters.

Declan added: “See when the game was over and we were making our way out of the stadium out from where the Block Z part of the ground is, the police just fired tear gas at us.

“My eyes and nose was just stinging. There was no trouble with the fans at all – everybody was in great form. The Madrid fans we met were great craic – no issue at all with them.

“But the tear gas was fired by the police and it was absolute carnage then. It was very scary. My eyes and nose were stinging for at least two hours. One of the others I was with was wearing contact lenses and he had to take them out as his eyes were all bloodshot.

“I'm OK now. It was scary at the time – you spend all that money to go to football games and then you're treated like that. You wouldn't treat an animal the way we were treated.

“Leaving the stadium, you could see groups of locals roaming around the stadium attacking people. We were OK as we were in a group of twelve to fifteen people.

“I managed to get back to my hotel around half one in the morning. On the train back, there was a Liverpool fan trying to tell police that one of the locals in a blue cap nearby had just stolen his phone – yet the police did nothing. In fact they just stood watching as this fella ran past them.

“It was just a terrible experience. I went to Paris with Derry City back in 2006 and that was such a different experience compared to this.”

The French Ministers of both the Interior and Sport have attempt to spin the story that '40,000 Liverpool fans without tickets or with forged tickets' were to blame – despite accounts from fans of both clubs and journalists from across the world who were at the stadium unequivocally refuting such claims.

The French Government claims cut no ice with Declan either.

He said: “I've read that the police have been saying there was forty thousand attempts made by Liverpool fans to get in with 'fake tickets'. It was a surprise to hear they had conducted a full enquiry in such a short space of time – just nonsense.

“I'm just glad that no one was killed. Yet the fans – of both teams – were in brilliant spirits beforehand. The Madrid fans were great and it was a brilliant day before we all had to go to the game.

“Even afterwards, the Madrid fans were great. When we got back to the hotel, those who were staying there as well were giving us food. There was no animosity with the Madrid fans at all.”