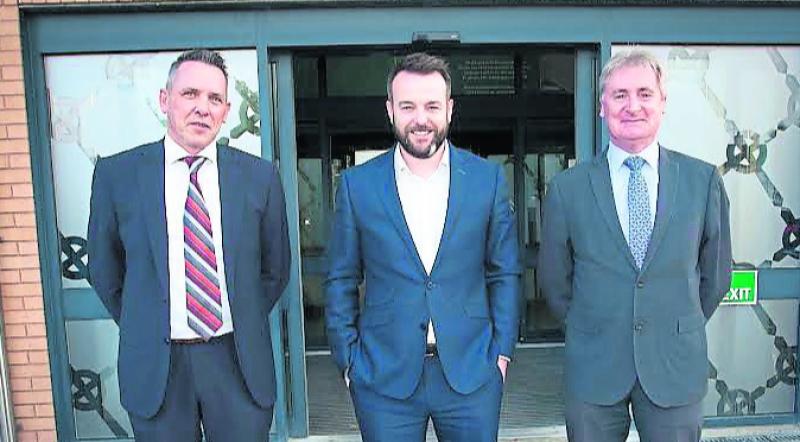 St. Joseph’s Boys’ School in Creggan was the setting for a visit from SDLP leader Colum Eastwood.

He was there at the invitation of the sixthform politics students to speak about his work as an MP, how the House of Commons operates and the challenges of his role as a public representative.

Politics is a very popular subject in St. Joseph’s sixth form at present where there are currently in excess of 40 pupils.

In addition to the school’s own pupils, students from other schools attend as part of the Foyle Learning Community.

This year, St. Joseph’s deliver the subject to students from St. Mary’s College, St. Cecilia’s College, Foyle College and Lisneal College. Indeed, the Westway school is the first in the North to offer a GCSE in politics.

The event was chaired by Peter Smith, the Head of Department for Government and Politics. As a self-confessed political anorak, it was very clear in his opening remarks that Mr. Smith was delighted to be hosting such an event.

He started by reminding the audience that the last time Colum Eastwood was in the school was to debate with Elisha McCallion in November 2019. Elisha McCallion was then the sitting MP and Colum Eastwood agreed that it was a full-blooded and feisty encounter. Of course, in the subsequent election in December 2019 Mr Eastwood recorded a 17,000 majority over his rival, one which resulted in a major overhaul of the Sinn Fein party in Derry.

Free run for the DUP

The Foyle MP opened about his representative role as an Member of Parliament at Westminster and as the current party leader of the SDLP. He first entered local politics at the age of 22 and spoke about the importance of democracy.

He reminded the audience that their grandparents had marched for civil rights in Derry in the 1960s and one of the key demands at that time was the right to vote. 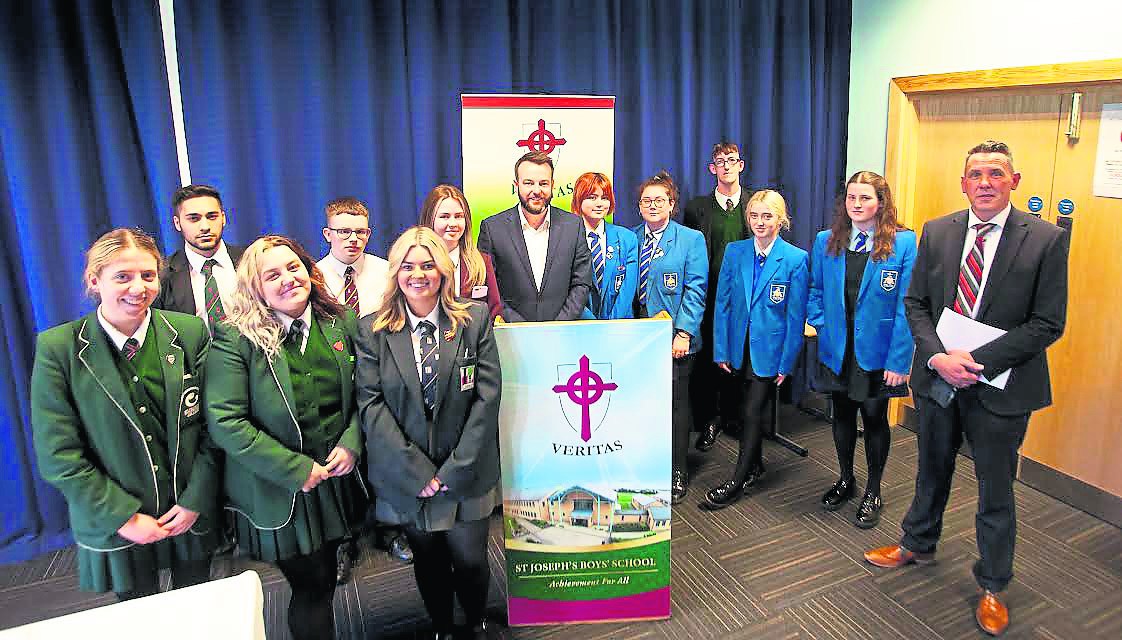 He bemoaned the fact that from 2017 to 2019 there was no representation for Irish nationalists in the House of Commons.

During this period the composition of MPs from the North were: 10 DUP, one Independent Unionist and seven Sinn Fein who were abstentionist.

In his opinion, this composition skewed the political debate and gave the DUP MPs a free run. The voice of Irish Nationalists was silenced.

Punching above their weight

There are currently 650 MPs in the House of Commons with the SDLP holding two seats. It would be foolhardy to suggest that the SDLP play a key role at Westminster and Mr. Eastwood conceded this.

However, he did present a cogent case that the party was able to punch above its weight.

The party is given speaking rights which are not commensurate with their numbers. He confessed that he is a good 'bobber, - a reference to the practice of standing and sitting which MPs engage in to catch the Speaker’s eye in Parliament.

He explained both Claire Hanna and himself got their voices heard and they wee now able to present a more judicious appraisal to Parliament of the effects of Brexit than that which would have been the case 2017-2019.

He then gave an insight into the machinations of Parliament where the SDLP regularly liaise with the celtic nationalist parties (the SNP and Plaid Cymru) to work against the Tories.

This is combined with working closely with the British Labour Party to create a Centre Left Axis in Parliament voting against Tory legislation pertaining to Brexit, Covid and Universal Credit in recent times.

Sean Kerr, a Year 13 student, posed the question about the MP’s priorities for Derry. Mr. Eastwood identified four key areas which he was exercised about. The first was the expansion of Magee to 10,000 students. This would be transformational for the city. He was confident that such a target would attract investment and go some way towards ending emigration.

A second priority would be for Derry to be designated a 'Free Port' which would regenerate 1,000 acres of land around Lisahally port. 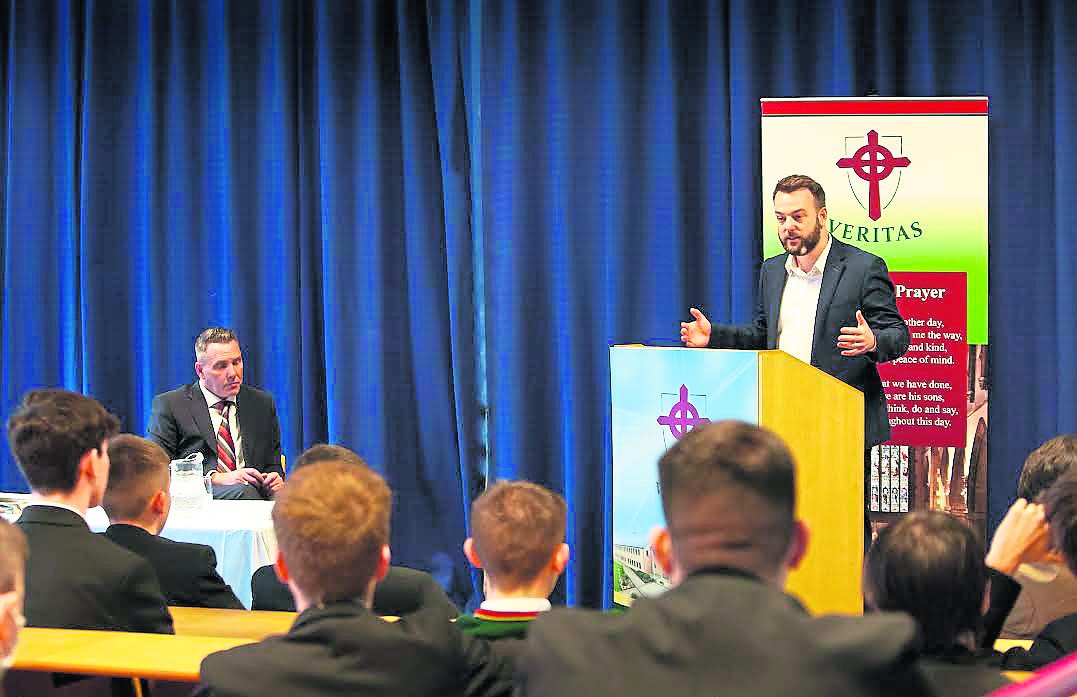 In the MP’s opinion, this would be a game changer for the region.

His third consideration was the looming crisis over energy and the reduction in Universal Credit, which, he said, would have a profound impact on many families in Derry.

A further pressing concern was the current British Government’s policy towards legacy issues. Mr. Eastwood considered this policy to be an affront to justice and one which he is not prepared to accept.

The Foyle MP has certainly been bold in recent weeks advocating a mandatory vaccination programme. It would be fair to say that this was a divisive issue among the students. Several spoke passionately about their right to decide what should be put in their body. He conceded that people had a right to be unvaccinated but that this came with consequences. Their right to reject the vaccine should not put others in society at risk. He claimed that this was now a pandemic of the unvaccinated and that he wished to avoid another lockdown.

In his opinion, vaccine passports would ensure life could return to normal. Mr. Eastwood claimed that over the course of recent days his constituency office had been the target of anti-vaccine protesters. This exchange certainly raised the political temperature in the room.

Thomas McGowan asked about the voting system used at Westminster and whether it was fit-for-purpose? Westminster elections use the First-Past-the-Post system whereas Assembly elections are settled on the basis of Proportional Representation.

Mr. Eastwood concurred that reform was needed. He gave the example of the Green Party in Britain receiving some 850,000 votes at the last election yet they had only one MP.
He said the FPTP system was outdated, and reform was long overdue.

Che McMonagle, Year 14, was annoyed that young people aged 16 and 17 were denied the right to apply for the Spend Local £100 voucher. He was perplexed that as a worker who paid National Insurance she could not avail of this benefit. Mr. Eastwood compared the voucher scheme to the RHI scandal where vast amounts of public money were squandered. He questioned the rationale of giving the voucher to every citizen over 18 including those who did not require it. He claimed that MLAs made the expedient and popular decision rather than the right one.

He suggested that the money would have been better spent on health or to deal with the looming crisis pertaining to cuts in universal credit. Furthermore, he did not share the optimism of the Minister that it would be spent locally.

One of the students then raised the issue of period poverty. The Foyle MP responded that he was proud that his colleague in the Assembly, Pat Catney, had proposed legislation on this very issue. He thought it was “pretty cool that a man had brought the Bill forward” but conceded that the legislation is too slow for such an important issue.

It was sure to happen! Niamh Lamberton (St Mary’s Year 13) questioned whether it was right for the SDLP to attend centenary of partition eent. Mr. Eastwood dismissed the view that it was a celebration of any sort. He made it clear that he was opposed to partition, that this was a religious service to mark partition and that it was an event which happened in our shared past.

Mr. Eastwood made the salient point that he was also opposed to Bloody Sunday and World War One but he still marked these events. He believed it was the right thing to do and that Nationalists needed to stretch themselves and to be inclusive if they were to build a new Ireland. He even speculated that the late Martin McGuinness would have attended such an event.

In light of the Sarah Everard case, Amelie McDermott posed the question on whether the SDLP had a policy on the abuse towards women. Colum Eastwood was unequivocal – there needed to be a law against misogyny. He argued that domestic abuse is the biggest problem and that support for women needs to be more accessible. In the current climate he was certain that we need a clear strategy for protecting women and girls. 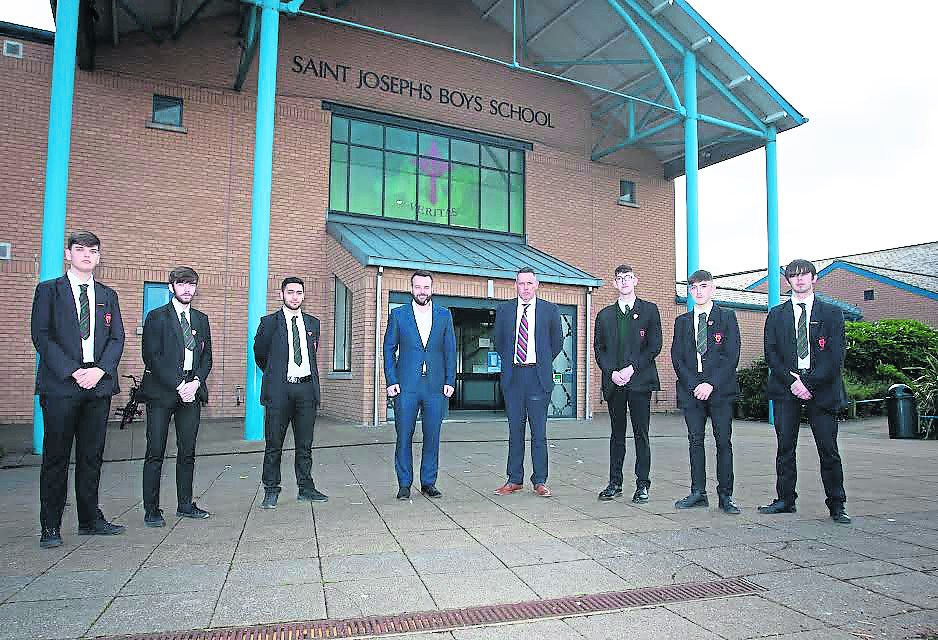 The chair Mr. Smith, thanked Colum Eastwood for his attendance. As the photographs were taken Mr Eastwood indicated to Mr. Smith that he was receiving disturbing news on his phone. Twitter was reporting a stabbing incident involving a Conservative MP. It was a sobering end to the event and a reminder of the dangers that public representatives face in the execution of their duties.

This is the first of a number of similar events the school hope to hold in the coming months with invited guests taking part in debates and Q&As with students.