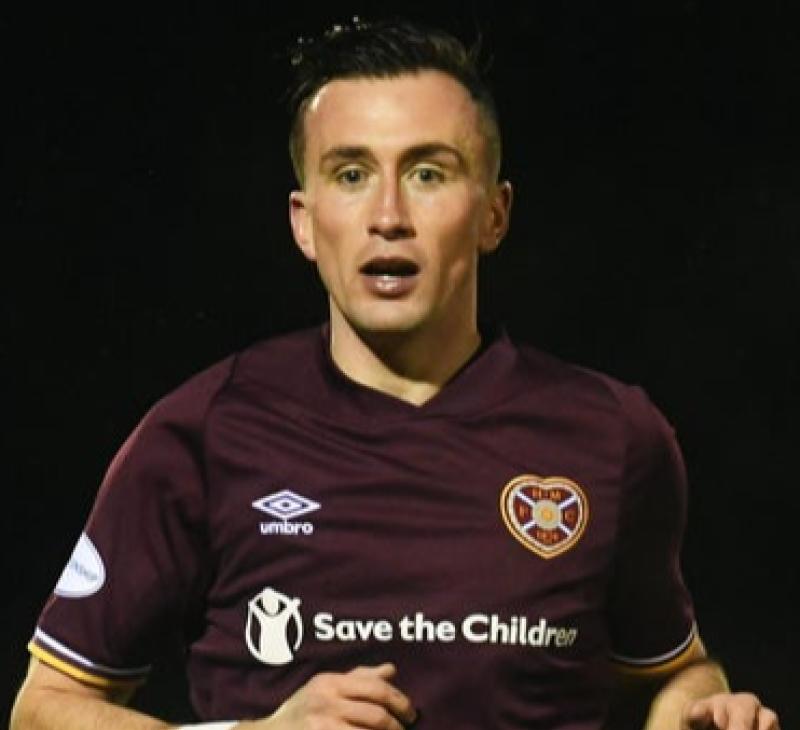 Former Derry City midfielder, Aaron McEneff, signed for Scottish Premiership side Hearts earlier this year. However, he has only played a total of 26 minutes in the Jambos' league campaign

Former Derry City midfielder, Aaron McEneff, has been told by his boss at Hearts, Robbie Neilson, that when his first team chance does come, he must “take it”.

McEneff, who grew up in Derry's Cornshell Fields estate and was a pupil at St Columb's College, joined the Edinburgh side earlier this year in a switch from Shamrock Rovers.

The 26-year-old, who spent three years at Derry City making 102 appearances and scoring 25 goals, was brought in to help the Jambos' promotion push back into the Scottish Premiership.

Hearts have made a flying start on their return to Scotland's top-flight – currently the only unbeaten team in the league so far – but it has been largely done with McEneff kicking his heels in the stands.

Many expected him to be part of the Tynecastle side's midfield engine room this season.

However, the signings – and subsequent good form – of Beni Baningime and Cammy Devlin has led to the Derry man not seeing much first-team action.

In fact, Aaron has only played in two league games so far. Both were off the bench and totalled a combined 26 minutes. He has been left out of the squad altogether for Hearts' last two matches against Motherwell and Rangers.

However, in an interview with The Edinburgh Evening News, Jambos boss Neilson says that McEneff has been unlucky not to be involved, but says that when his chance does come, he must be ready to seize it.

Neilson said: “I speak to Aaron regularly about it. I spoke to him (before the Rangers game) when we let them (the squad) know who would be involved, who wouldn’t be involved and who the subs were.

“Aaron has been training really well. Probably the hardest decision I have every week is who doesn’t make the bench.

“The guys who start are delighted. The guys on the bench are disappointed but they’re still involved. They still have the feeling that they might get on. It’s the ones who don’t make the bench.

“Touch wood this continues but we are sitting right now with no injuries, which is very rare in any team. We’ve played fourteen games in the league and cup and we are sitting with a full squad available.

“For the guys who aren't playing and not making the squad, it’s about continuing to work hard. When they get an opportunity to come in, they need to be at it to stay in. Aaron is a match-winner. He has moments in him that can win you a game.

“He has been training really well and it’s important he continues doing that because they know they will get a chance. When it comes, he needs to take it and stay in.”