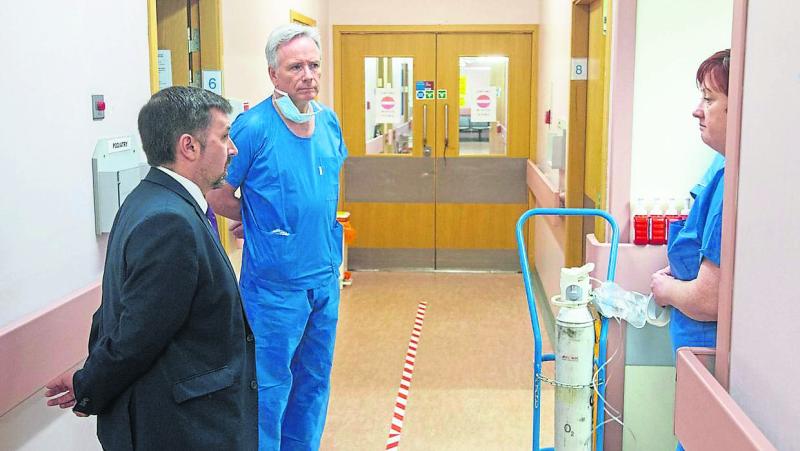 After probably one of the most challenging periods faced by people around the world in modern times, local people are being invited to say thank you this week to those who made a difference during the pandemic.

As part of a wider campaign of thanksgiving, the Mayor of Derry City and Strabane District Council, Alderman Graham Warke, has called on everyone to show their appreciation through a gesture of thanks directed at someone who played a role in helping others over the past 18 months.

From today until Sunday next, October 24, buildings in the council area will be illuminated in purple to shine a light on the outstanding efforts made by those not just on the frontline in the NHS, but in our shops, our pharmacies, our care homes, our schools, and in the wider community.

Mayor Warke is also asking local people to personally recognise those who made a difference to them by saying thank you, or making a small gesture with a gift or a card.

He said: "These have been unprecedented times of great hardship and fear for many people and we have come through this thanks to the wide network of dedicated workers and volunteers who have sustained our communities when we most needed help. I would like to ask people to think about someone who made a difference to their lives during lockdown, whether through their day-to-day work or volunteering in the community.

“It could be someone who delivered food parcels, who worked in a shop throughout the pandemic despite the risk, who reached out to an elderly neighbour, or checked in on a loved one.

"Everyone has been through an incredibly difficult experience, and I think we have all been touched by acts of kindness that have lifted our spirits in the darkest of times.

“Now, as we gradually emerge from lockdown, it's a great time to say thank you for the small things that have sustained us, and the people who made a difference when we most needed it."

The Week of Thanksgiving stems from a council motion passed in February this year calling for recognition of the local effort in response to Covid-19.

The motion called on the local authority to formally acknowledge the good work of the community and voluntary sector by considering all opportunities to recognise workers and volunteers in the sector. £10,000 was set aside for a number of recognition initiatives taking place throughout the year.