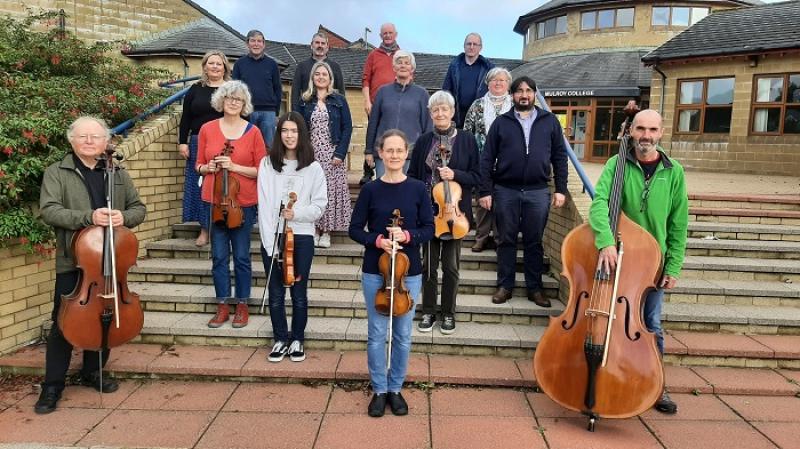 The Glebe Gallery in Gartan will host the world premiere on Sunday of a new musical work recalling how a pandemic resulted in Colmcille founding his first monastery in Derry.

‘Mobhi’s Belt’ has been written by the well-known Derry composer Dr Seán Doherty, and will be performed by the Donegal Chamber Orchestra and members of the Conwal Singers.

It has been commissioned through a scheme co-ordinated by Donegal County Council and Derry and Strabane Council aimed at celebrating the 1500th anniversary of Colmcillle’s birth in Gartan.

Traolach Ó Fionnáin, arts officer with Donegal County Council, said it would be hard to imagine a commission more appropriate at this time – how Colmcille responded at a time of pandemic.

“We’re delighted with all the commissions we have lined up for the Colmcille 1500 celebrations, and I’m really looking forward to hearing this new work on Sunday,” he said.

The concert will be held in a specially erected marquee at the Glebe at 3pm on Sunday. Tickets are now booked out.

Dr Doherty, who’s attending the premiere, said he was fascinated to find in the life of Saint Colmcille such a parallel to the current time of pandemic.

“I suppose you could say it was an inspirational discovery,” he said. “Colmcille was studying with Saint Mobhi at Glasnevin here in Dublin, close to where I live. He was forced to return to Gartan because of a pandemic, and when he was there he was asked to set up a monastery in Derry.

“He refused to go ahead without the permission of St Mobhi. The next thing some monks arrived with the revered St Mobhi’s belt, which was the signal for Colmcille to go ahead.

“The new work is in three parts, modelled on this episode and two others in Colmcille’s life. It has been written with the Donegal Chamber Orchestra and Conwal Singers in mind. Sunday will be my first chance to hear the piece realised.

“I’m very pleased to help celebrate a saint who was very much part of my upbringing in Derry, and important for my parents’ families in Donegal. My father’s family are from Dooish, Ballybofey. The work is dedicated to my mother’s family, the Hannigans, who are linked with Drung near Redcastle and have great interest in Colmcille.”

“It was great to get the go-ahead, but also quite a challenge at this time!” he said. “It hasn’t been the normal routine of preparation because of the restrictions, but the piece is wonderful and we aim to do it justice on Sunday.

“It is great that all the seats have been taken. Hopefully we’ll have another chance to perform this for people who can’t get along to see it this time.”

The hour-long concert is part of the events of the sixth annual Cathedral Quarter Literary Festival. It will include music by French composer Camille Saint-Saens, who died 100 years ago, and Argentina’s tango master Astor Piazzolla, born in 1921.

Funding for the commission came from the Colmcille 1500 Grant Scheme, funded by the North West Development Fund and Creative Ireland, in conjunction with and support by the government and the NI Executive Office.