Parties urged to prioritise North West ahead of next election 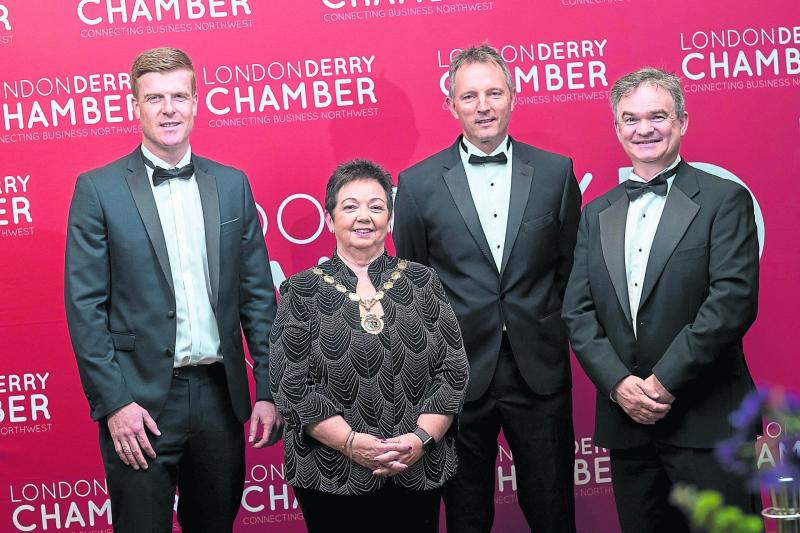 The President of the Londonderry Chamber of Commerce has called on political parties and representatives to prioritise the North West and ensure the region gets its fair share of investment ahead of the upcoming Assembly election in 2022.

Dawn McLaughlin was speaking at the Londonderry Chamber’s President’s Annual Dinner in the Everglades Hotel in the city. Attended by over 250 business leaders, politicians, and civic leaders, the dinner was the first major Chamber event since March 2020.

Sponsored by Find Insurance NI, the dinner was hosted by former broadcast journalist Sarah Travers and featured a ‘fireside chat’ with RTÉ Europe Editor and Brexit expert Tony Connelly, who is originally from the city.

Dawn McLaughlin said now is the time for elected representatives, candidates, and ministers to prioritise Derry and the North West as we move closer to next year’s election and has called on parties to work constructively to rebuild the local economy after the impact of the pandemic.

Chamber President Dawn McLaughlin said: “The pandemic has had a hugely detrimental effect on the North West economy, but I have been heartened and filled with pride by the way in which our local business owners and leaders reacted to the crisis before them.

“The dinner is a fantastic occasion and opportunity to celebrate our resilience, recognise the strides we have made collectively over the past 18 months, and commend the efforts made by our local business community in protecting jobs and keeping their companies afloat in the most difficult of circumstances.

“As we begin to come out the other side of the pandemic, the time is now for our ministers and our elected representatives at Stormont to prioritise the North West and deliver for our region.

“While the signing off of the Derry and Strabane City Deal and the opening of the School of Medicine at Magee earlier this year were welcome first steps, there is much more that needs to be done to address regional inequality in Northern Ireland and level up the North West City Region.

“Ahead of the next Assembly election in spring next year, candidates from all political parties must commit to properly invest in our city, create and attract new jobs to our region, and address deficiencies in our economy.

“This includes committing to the full expansion of Magee, transforming our physical infrastructure to improve our connectivity to and from other economic hubs, marketing our region to businesses and investors across the globe as a prime location to do business, and properly supporting our businesses as they recover and rebuild post-pandemic.

“There is now an opportunity for all key partners in our region – business leaders, elected representatives, educational institutions, civic leaders – to work together and make sure the North West builds back as strongly as it can after Covid, prioritising jobs, investment and prosperity for our businesses and our communities.”