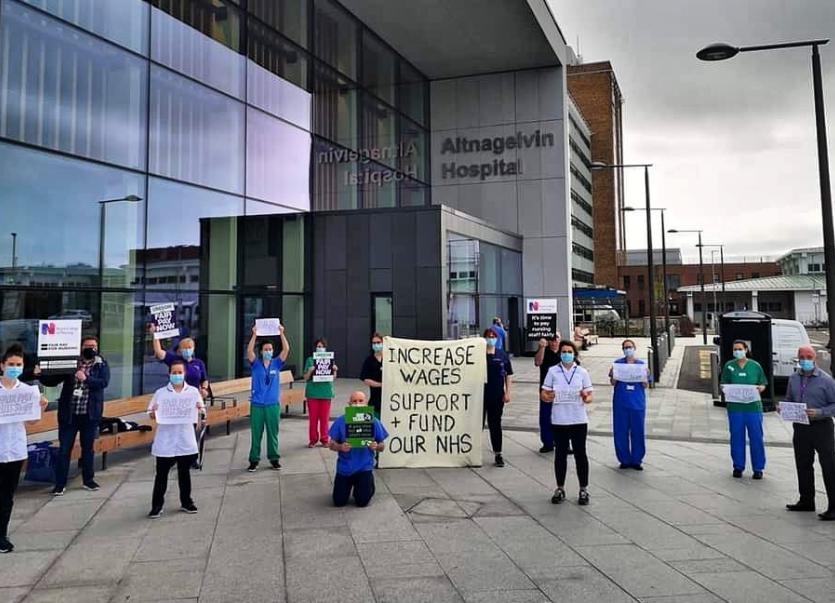 Photo: People Before Profit Councillor Maeve O'Neill with co-workers at Altnagelvin Hospital for the NHS Pay Day of Action

A meeting of the Western Trust Board has heard that Northern Ireland doesn’t have a budget to offer NHS staff a four per cent pay increase.

It remains unclear what pay rise health workers can expect in Derry and across the North.

The UK government announced a one per cent pay rise but Scottish First Minister Nicola Sturgeon said NHS staff deserve ‘more than applause and one per cent is not enough’.

More than 154,000 NHS Scotland staff are to be offered a pay rise of at least four per cent.

At Thursday’s monthly meeting at Altnagelvin Hospital the matter was raised.

The Trust has spent over £40m on temporary doctors, health professionals, nurses and admin staff in the past year, according to a financial performance report dated February 2021.

It is the only Trust in Northern Ireland with a formal financial recovery plan in place to reduce its overall deficit of around £40m.

“A four per cent pay award would present problems in the fact that it would only be affordable if the budget is there for it.

“It’s my understanding that there wouldn’t be a budget set aside for a four per cent uplift.”

He added that the budget suggests one per cent from the British government and Northern Ireland’s budget hasn’t been finalised.

The NHS will look to a pay review body in the Spring, he said, to see what they recommend.

“I know Scotland has gone in advance of that with four per cent, but at this stage there certainly wouldn’t be the money for a four per cent pay uplift, is my understanding at departmental level,” Mr Guckian added.

The Royal College of Nursing (RCN) is funding thousands of members to attend a six-week training programme ahead of a possible ballot of its members on industrial action later this year.

Speaking to the Derry News, People Before Profit Cllr Maeve O'Neill said there was a 'great showing' from all unions at Altnagelvin Hospital to demand proper pay rise at the April 1 NHS Pay Day of Action.

She commented: "All unions representing health and social care workers have unanimously rejected the insulting pay offer of 1%.

"How quickly the Tories went from cynically clapping health workers to slapping them in the face with insulting pay offers.

"We're calling on everyone to support the demand for a proper pay rise."

She added: "We call on everyone to back our nurses and all health and social care workers in their demand for justice and respect. We are united on the demand for respect and won't be divided.

"This is a fight for decent pay for us but this demand extends to all workers. It's also about safe staffing levels and saving the health service. All communities have a stake in uniting for pay justice and to  stop privatisation of the NHS.

"This is about workers rights and social justice for all."