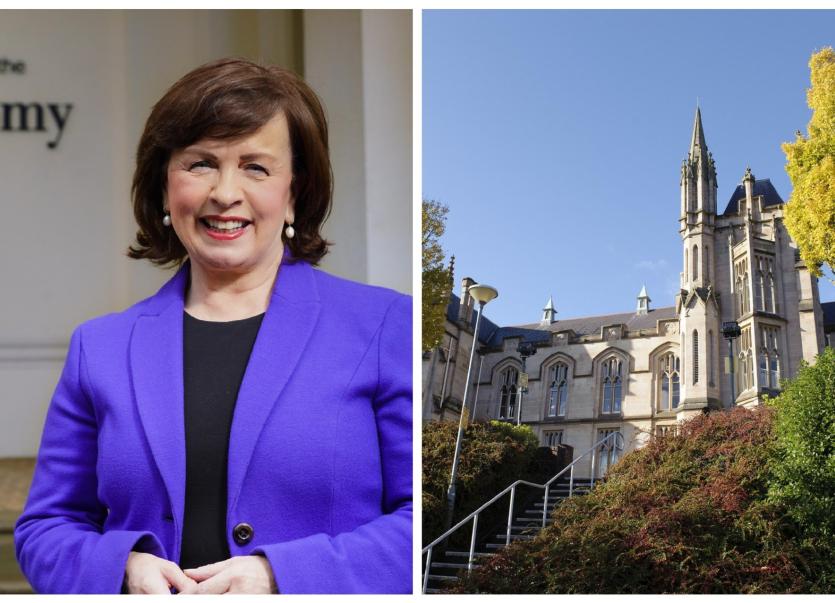 Minister Dodds delivers a 'clear' message to Ulster University after a decision to transfer Health Science courses to Magee.

Economy Minister Diane Dodds has issued a warning to Ulster University that it is ‘dependent’ on funding from her department.

It comes after last month’s announcement that Health Science undergraduate courses would be transferred to the Magee campus in Derry rather than Coleraine.

Minister Dodds initially said she was ‘disappointed’ after learning the courses had gone to Magee and would speak to UU Vice Chancellor Professor Paul Bartholomew.

Following an Assembly question from one of her party colleagues, it has now emerged that she has spoken to Professor Bartholomew.

DUP MLA for East Derry, Maurice Bradley, asked the Minister for the Economy what her Department is doing to promote Ulster University's Coleraine campus.

In response, Minister Dodds said: “I met with the Vice-Chancellor of Ulster University on 3rd February, following his announcement on the future relocation of undergraduate health science courses to the University’s Magee campus.

“I made it very clear to him that as a multi-campus university, dependent on funding from my Department, that I expect the Ulster University to be transparent and equitable in its distribution of teaching provision across all of its campuses.

“I have requested sight of the University’s strategic plans to consider its proposals for future growth at its Coleraine campus.”

A new medical school and around 800 students on the health science courses will increase numbers at Magee.

The university has ambitions of growing the campus to 6,000 by the end of the decade.

However, Derry representatives and campaigners want to see a ‘full-sized university’ in the city with a minimum of 10,000 students.

That was the commitment made in New Decade, New Approach – an agreement which restored devolved government in NI.

She said they fail to confirm that the minister supports what all parties signed up to in New Decade, New Approach.

The Foyle MLA said: "Expanding the Magee campus in Derry is like pushing a very large, very heavy boulder uphill. Minister Dodds has just made that boulder even larger and even heavier.

"New Decade New Approach contained the explicit agreement for the expansion of the Magee campus to 10,000 students.

"The minister's response, and lack of response, to other written questions is also very concerning.”

She added: “While she specified in one written answer to another MLA that she wishes to see expansion at the Coleraine campus, she has not replied to my question seeking her confirmation that she supports the expansion of Magee to 10,000 students.

“That question was supposed to be answered no later than 9th February, yet has not had an answer. “My follow-up question, seeking an answer to that earlier question, has also not had a reply and is also overdue.

"The SDLP will not relax in its determination to make Derry a full-sized university city.

“We will continue to explore and work on options to achieve this, including through ongoing dialogue with the Irish government, which has shown its commitment to university expansion in Derry."

Meanwhile, People Before Profit Councillor Shaun Harkin addressed the Minister's comments on 'equity' across all campuses.

The last figures obtained by the Derry News by way of an FOI request indicated 355 administrative jobs at Coleraine compared to 125 at Magee.

Cllr Harkin said: "The Economy Minister keeps saying there should be 'equity' across all the campuses. There certainly should.

"Coleraine campus has around 800 mainly well paid jobs compared to just 350 on Magee campus. The majority of the imbalance is because of the number of professional and technical staff at Coleraine.

“If you go onto the Ulster University website you will see that most of the Central departments of the University - finance, HR, the VC’s office etc are located on the Coleraine campus.

“People Before Profit has long argued that the absence of a proper University in Derry is not only a matter of student numbers, with which there will continue to be a massive deficit, but also of the well paid administrative jobs that come with a University.

"Coleraine has many of them, not a single central department of the University is located in Magee. The campus is really second class compared to Coleraine.

"The population of Coleraine is less than a quarter of Derry, so with a balanced approach we would expect Magee to have four times the number of students and jobs. So, yes, let’s get some balance between Coleraine and Magee."