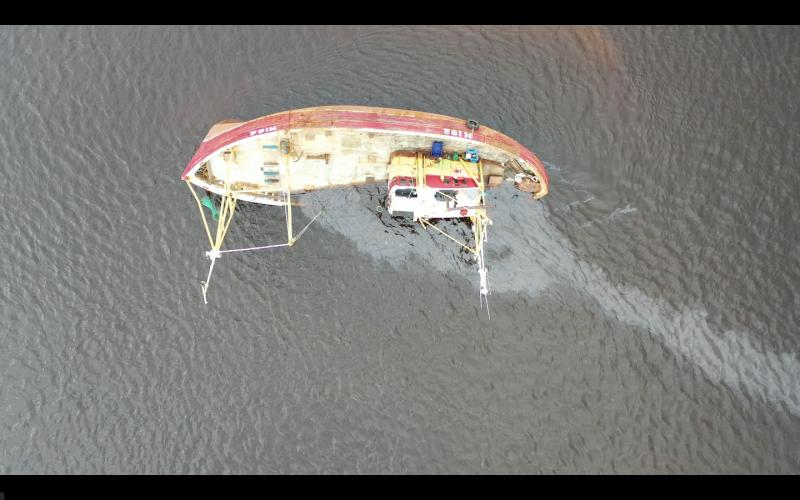 Foyle Port has said the owners of the stranded boat on the River Foyle should act with urgency to move the vessel.

Photographs have appeared online which indicate that oil or diesel has spilled from the boat into the river.

As an Independent Statutory Authority Foyle Port has a duty to develop, maintain and operate to 'the highest standards of efficiency, financial prudence, environmental awareness, safety and security'.

A spokesperson for Foyle Port today said: “The responsibility of the ongoing management of the boat lies with the owner and it is in everyone’s interest that he takes the appropriate action for its movement.

“We are in contact with the owner and await the next steps in his decision making in terms of his plan to move the vessel.”

He added: “It is unfortunate that we have had to take some preventative action already in terms of placing a boom around the boat.

“We are monitoring the situation and made it clear to the owner that this needs to come to a conclusion sooner rather than later.”

A boom is a floating beam used to contain oil spills - they are used to reduce the possibility of polluting shorelines and other resources, and to help make recovery easier.

Last week, for the first time publicly, the owners Nathan Ross and Druso Martinez de Riquelme gave their side of the story.

They confirmed that their intentions are to travel to Belfast once a starter motor is installed where the old fishing trawler will be moored at the Titanic Quarter as an Air B ‘n’ B.

One of the owners Druso Martinez de Riquelme said they got the boat for free and have since invested thousands of pounds in it.

The owners remain determined to refloat the vessel when the tide is favourable.