Bloody Sunday: ‘We’ll continue until there’s not a breath left in our bodies’ 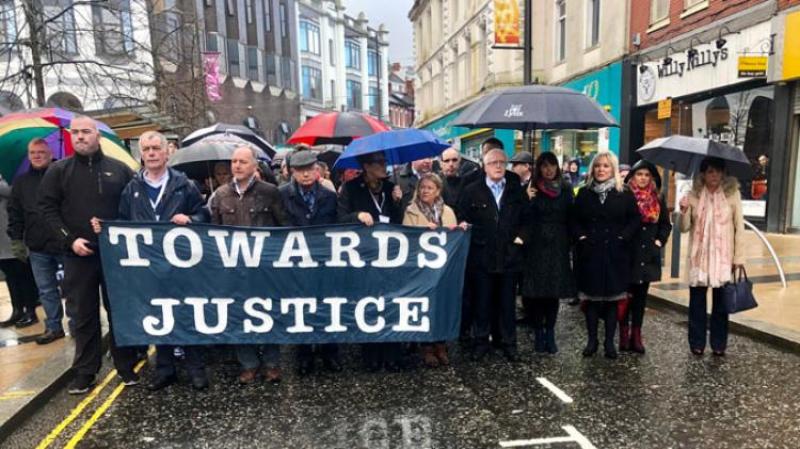 Bloody Sunday families have vowed to continue their fight for justice until they draw their last breath.

John Kelly whose 17-year-old brother Michael was killed on Bloody Sunday said this week’s announcement came as a ‘real disappointment to the families’.

“We had a wee bit of hope but it disappeared this morning whenever we found out the outcome of the review.

“But we’re not surprised to be truthful, we had a fair inkling naturally, we’re dealing with an injustice on Bloody Sunday and the PPS is certainly not helping us, they’ve let us down.”

He added: “The next step now is the High Court for a judicial review of the PPS outcome.  Therefore, we’re never going to give up on it.

“That has to be done within three months, that is more or less prepared and ready to go.

“That could be by the end of this year of start of next year depending on COVID-19.

From a personal point of view John said it is ‘hard to take’ as he believes there is enough evidence to prosecute the soldier responsible but he will support the families who will have their day in court because ‘if we get one, we’ve got them all’.

The Bloody Sunday Inquiry was sure that Soldier F shot and killed Michael Kelly at the rubble barricade on Rossville Street.

In respect of Soldier F, once his own accounts were disregarded, there was some evidence that fell to be considered that might show he fired at the rubble barricade.

A forensic examination in 1972 of a bullet recovered from the body of Michael Kelly linked that bullet to a particular rifle, with the serial number A.32515.

In the context of criminal proceedings there are some potential difficulties in respect of the forensic evidence, but it was concluded that the evidence provided a reasonable prospect of proving that Michael Kelly was killed by a bullet that was fired from the rifle bearing the serial number A.32515.

However, whilst giving the rifle an exhibit number, the PPS said it could not be linked to any particular soldier.

The only source of evidence, the PPS said, that it was Soldier F who had fired this weapon on Bloody Sunday was contained in one of his own inadmissible accounts.

There was therefore ‘no reasonable prospect’ of proving in criminal proceedings that it was Soldier F who discharged the shot from rifle A.32515, according to the PPS.

There were two further potential sources of evidence in respect of Soldier F firing at the rubblebbarricade albeit these could not have linked him specifically to the killing of Michael Kelly.

One soldier witness provided a statement in which he places Soldier F amongst a group of soldiers who were firing in a location that would appear to be Rossville Street.

However, this evidence was deemed ‘insufficient’ to prove that Soldier F was one of those actually firing.

This soldier also later heard Soldier F admitting to having fired on Bloody Sunday, but this admission did not detail where or when he fired and therefore could not be tied to the rubble barricade.

One other soldier refers to Soldier F firing in this location.

However, in his first statement he specifically stated that he was unable to identify which soldiers fired at this time.

There are also a number of further significant reliability and credibility issues with this witness.

The PPS concluded that the available evidence did not provide a reasonable prospect of proving that Soldier F fired at this location.

As such, a decision was taken not to prosecute Soldier F for any offence in relation to the events at the rubble barricade.

Ciaran Shiels, solicitor of Madden & Finucane who represent the majority of the victims of Bloody Sunday said: “Following the PPS decisions last March our office embarked upon a painstaking analysis of the reasons relied upon by the PPS to prosecute only one soldier, and only for some of the murders he was involved in on Bloody Sunday.

“Submissions extending to almost 150 pages were lodged with the PPS setting out why we considered their decision making was flawed and unlawful.

“Today’s decision by the PPS to uphold its original decision and to bring no further prosecutions is deeply disappointing for the families and wounded who are left with the firm conclusion that members of the Parachute Regiment have effectively gotten away with mass murder.

“They are left with no alternative now but to consider challenging these decisions in the High Court by way of judicial review proceedings.”

County Derry murder victim had case due in court today