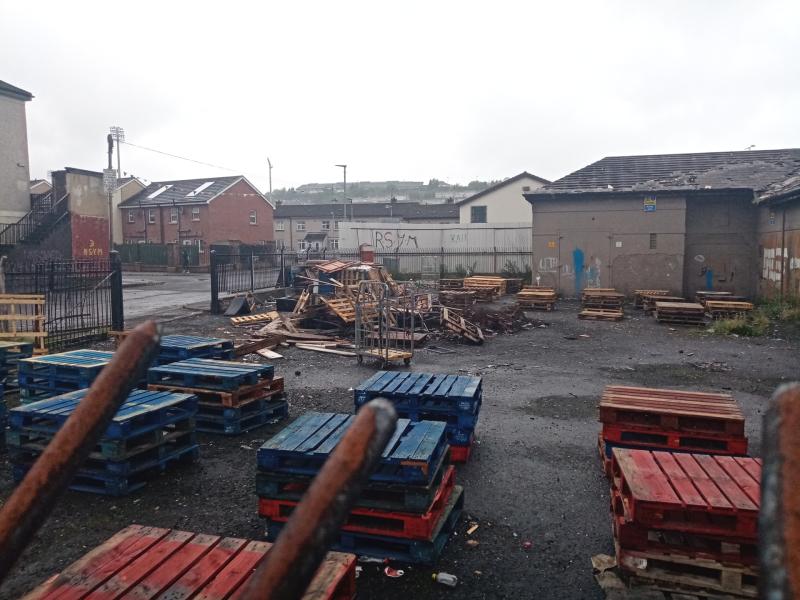 Local representatives have highlighted anti-social behaviour at a vacant Bogside site and said it raises 'child protection issues' as young people are hanging around the hazardous site all day.

The issue of redeveloping the derelict Meenan Square site has dragged on for a number of years.

Controversial bonfires have been built at the site in the past and over recent weeks materials have been gathered and burned on a regular basis.

In February, The Executive Office (TEO) through its Urban Villages Initiative said it was working with Apex Housing Association and other statutory agencies to take forward plans to ‘transform’ the site.

This would incorporate youth and community facilities, social housing and small commercial units.

At that time locals, including workers at Denis’s Wee Shop and councillors for the Moor area confirmed to the Derry News that people had been asked to vacate premises to allow for demolition of the buildings.

The Bogside Inn was supposed to be part of the second phase of redevelopment – possibly years down the line.

Demolition work has not yet taken place and TEO was asked why there are further delays.

A spokesperson for TEO said: “The Meenan Square site is privately owned and the Department understands the owner did ask businesses to vacate the site in recent months.

“Work is continuing by the Department’s Urban Villages team and other stakeholders to allow for development of the site, however plans will be subject to business case and other statutory approvals and community consultation before any construction work can commence.”

Sinn Féin Foyle MLA Karen Mullan has said there are several long- and short-term issues that need resolved to deal with the re-development of the Meenan Square site in the Bogside which has become a source of anti-social activity.

Karen Mullan MLA said “It’s very apparent that there are short and long-term issues that need to be resolved at this scar site at Meenan Square.

“I and Councillor Patricia Logue are dealing with problems around this site on an ongoing basis.

“It is a health hazard and an eyesore for the residents of the area who have to look at it daily and deal with the anti-community activity that takes place there.

“There must be a collective effort over the summer period to deal with the recurring problems at this site which includes the illegal dumping of materials, the subsequent burning of those materials, the impact it is having in the area and the serious health hazards this throws up.”

She added: “There are also child protection issues with some very young children and teenagers being in around a very dangerous site 24hrs a day.

“In relation to any future plans for this site I fully understand the processes involved and that they take time and like everything they have been impacted by the onset of the Coronavirus Crisis and the change of ownership. But all bodies have a responsibility to prioritise this development.

“Over the past number of years myself and Cllr Patricia have worked intensely with the owners, the local community, Iona Enterprises, Dove House Community Trust, The Executive Office , Urban Villages and Council to progress the site to development and had hoped that demolition would have taken place before now.

“The residents in the immediate area have suffered for too long as this site has been allowed to fall into neglect and dereliction.

“I am confident that everyone involved is committed to delivering the proposed regeneration project that we all desire.

“I would urge all the stakeholders to redouble their efforts and commitments to ensure that this community gets the facilities and services that the redeveloped Meenan Park will deliver.”