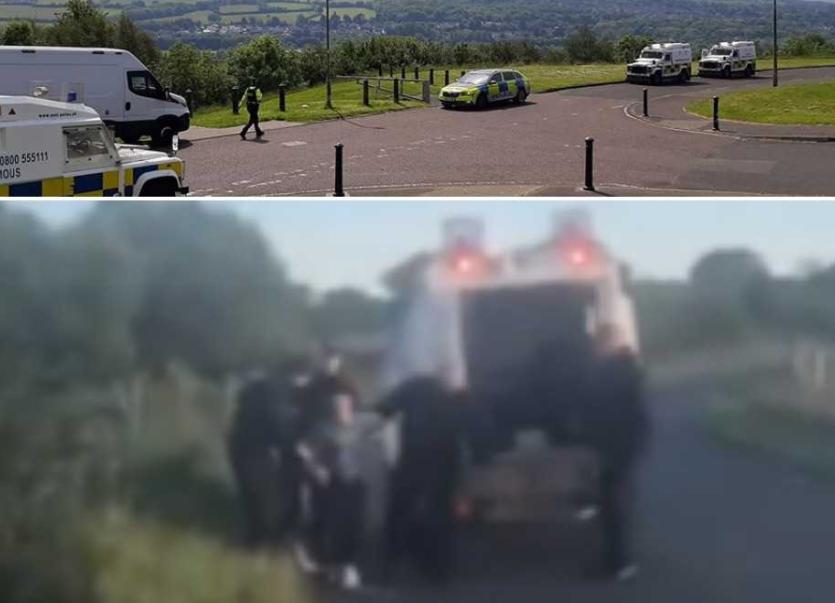 A teenager was struck with a baton and another arrested during an incident in Creggan over the weekend.

Police conducted searches in the back roads behind Creggan Heights as part of an investigation into dissident republican activity.

Mother of one 14-year-old boy, Donna Fletcher (Knight), said officers claimed that her son ‘had a mask on and pulled two wing mirrors off’.

The young boy, who has special needs, was subsequently arrested, put in the back of the police Land Rover and transported to Strand Road Police Station.

At the station, Ms Fletcher said she wasn’t allowed in to see him which is ‘unacceptable’ because he’s a child with special needs.  “They refused to let me in,” she added.

The Police and Criminal Evidence Act 1984 states that an appropriate adult must be contacted and allowed to attend to support and advise their child.

A 13-year-old boy who was observing the incident along with his girlfriend was struck with a policeman’s baton.

His grandfather Alan O’Hagan said: “My grandson came down to me after, he would help me about, and he was limping very badly.

“Him and his girlfriend were up walking when all the stone throwing started so the cops came after everybody and they had to get out of the road but he was caught up in it and a boy jumped out a jeep and whacked him across the leg.

“When he fell he cut his own elbow but when he got up again he was hit on the hand which left it bruised and swollen.

“I would condemn them big time for hitting wains.”

The child’s other grandfather, Stephen Quigley, said the boy was left with a ‘big welt’ on his leg and it was ‘scary’ for him.

“He was just going over for a nosey, as children do, when they got caught up in it.”

The PSNI has stated that it was carrying out an investigation into dissident republican activity when officers were ‘attacked by youths’.

Superintendent Gordon McCalmont said: "Police were carrying out searches in Creggan on Sunday, May 31, in relation to an ongoing investigation into violent Dissident Republican activity.

"When police were in the area a 14 year old male was arrested on suspicion of criminal damage and resisting arrest. He was released on bail.

"Whilst police were effecting this arrest they were attacked by a group of youths. One person was struck with a police baton.

"If anyone has a complaint to make about the actions of police they can contact the office of the Police Ombudsman Northern Ireland."

The PSNI made clear that the arrest of the 14 year old male was not connected with the searches that were being carried out.

Independent Councillor for the area, Gary Donnelly, said it is ‘indicative of British policing in nationalist parts of Ireland’.

“It exposes the lie that people have told us that things have changed.

“These people spend thousands of pounds on propaganda and publicity to give the impression that they are changed and reformed but the reality for people on the ground is very different.

“This all comes on the back of heavy-handed police operations in the town.

“Seeing dozens of armoured Land Rovers swarming in is not unusual, even again yesterday in Creggan (June 1) there were seven or eight armoured vehicles, cops with dogs and those carrying heavy duty weaponry – that’s the reality.

“In my view as a republican that shouldn’t be happening.”