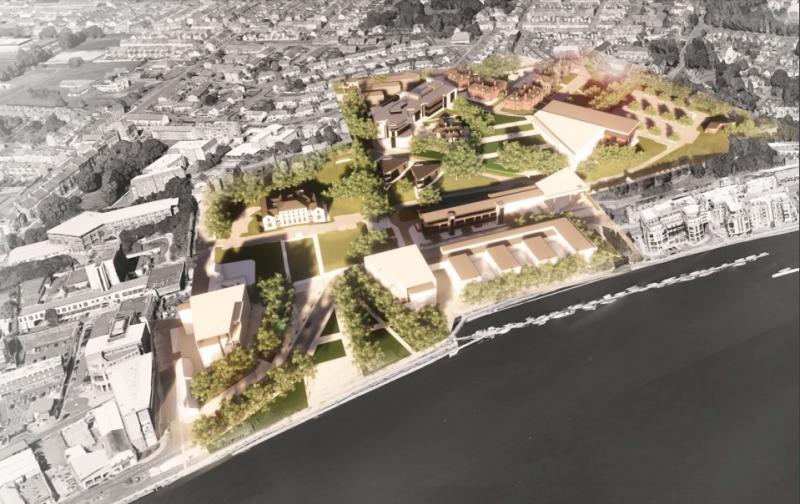 An artist's impression of an expanded Magee campus along Derry's riverfront

The NI Executive this week agreed to match the British government's funding for Derry's City Deal boosting the overall package to £210m.

It is anticipated that with funding leveraged from partners and the private sector the final figure may sit closer to £300m.

The local council has reiterated its plans to relocate to Foyle Street in order to make way for Ulster University expansion in the form of the Magee Medical School - one of the cornerstones of the City Deal.

An Ulster University document shows an artist's impression of an expanded Magee campus (above) along the riverfront.

The £210 million is ‘transformative for Derry and the NW’, she said, and ‘goes some way to redress decades of underinvestment after years of hard work by political, community and business leaders.’

As far back as November 2014, former SDLP MP for Foyle Mark Durkan raised the prospect of a City Deal for Derry.

Speaking at Westminster at the time he said: “In my own constituency, people would love to see city deal status even within our devolved settlement for the city of Derry.

“We need to look at this in a more fluid way and to get away from the politics and find the democracy.”

As it transpired, Belfast would be awarded Northern Ireland’s first City Deal as part of his Autumn budget in October 2018.

The package - £50 million for the Derry and Strabane City Deal and £55m for the new Inclusive Future Fund - aims to boost the economic potential of the city and wider region.

It has now been matched by the NI government bringing the overall total to £210m.

Last week Economy Minister Diane Dodds said the North West deal is ‘still being worked on’ and she ‘hopes Heads of Terms will be signed off in May or June’.

She added that ‘significant work has gone into it’.

Heads of Terms is a document which sets out the terms of a commercial transaction agreed in principle between parties in the course of negotiations.

In November of last year the local council stated that this document would be signed-off within weeks.

Once it is signed, work will progress on the preparation of a portfolio of outline business cases for the full range of projects, a process expected to take 12-18 months.

Alongside this, confirmation is needed of required revenue funding to support capital investment, in particular in relation to the proposed Graduate Entry Medical School.

Derry City & Strabane District Council has submitted all project proposals to government at this stage and the council continues to work with government to advance with the signing of the Heads of Terms.

Welcoming the match funding announcement a council spokesperson said it was ‘hugely positive’ news for everyone involved in the project.

She also confirmed that the council still plans on relocating from its headquarters on the Strand Road to Foyle Street car park adjacent to the Guildhall.

However, the council previously made it clear that these proposals are dependent on a number of factors, including funding and are all at an early stage of development.

Speaking yesterday a spokesperson said: “Work will progress over the coming weeks and months to advance and develop the regeneration projects earmarked for the match-funded Inclusive Future Fund that include the development of the Riverfront at Queen’s Quay (£35m circa) and signature tourism projects (£20m circa), all of which are in the process of being scoped out and business cases prepared.

“The proposed relocation of the Council offices still remains a key priority of the future planned expansion of the Ulster University and the development of the riverfront moving forward.

“The Council will continue to work with Government and key partners to bring forward the City Deal to the next stage including the Heads of Terms and remains committed to developing the key catalyst regeneration projects that will bring about growth and prosperity for Derry and Strabane and the wider North West region.”