'We need a new direction for society, towards equality and justice' 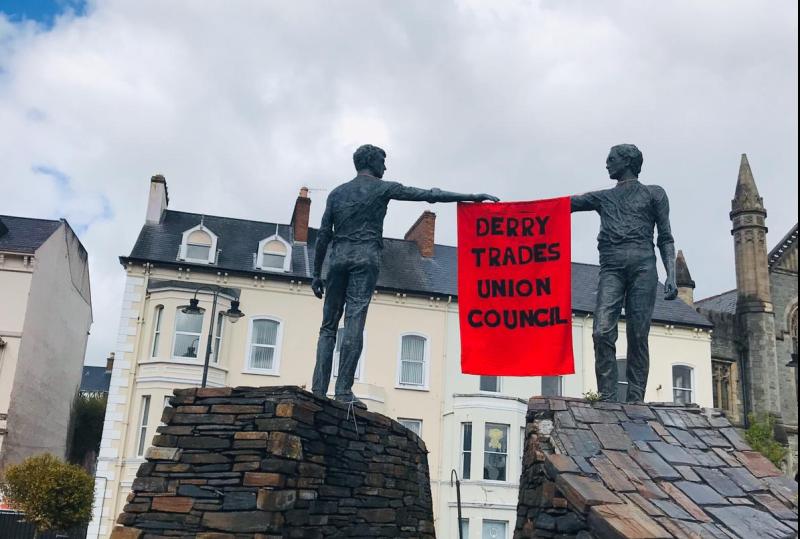 Chair of Derry Trades Union Council Niall McCarroll has taken the opportunity to express his views on the coronavirus pandemic, current political system, the legacy of deprivation in Derry and to launch a workers’ charter.

If the last few weeks have shown anything, it is that workers need unions.

The low pay and bad conditions of many who are now praised as heroes cannot be tolerated any longer. We will have to be organised to push forward for real change.

On May Day - International Workers’ Day - we raised the Red Flag of workers’ unity and socialism and launched our Workers’ Charter. We take this initiative in solidarity with the ordinary people of Ireland in a quest for a world where every child has a decent chance and workers are equal citizens, not powerless to shape their own destinies.

The charter calls for the Living Wage for all and a shift in the balance of wealth and power away from corporations and the rich and towards the rest of us.

The Covid-19 crisis is a threat to humanity. It has also laid bare the huge inequalities which have been covered up by a political system which gives an illusion of fair play and equal rights but deprives huge numbers of working people of rights and basic needs.

Now, faced with the possibility of their whole system grinding to a halt, the establishment has found vast sums of money for emergency funding and relief schemes. The money was there all along - even when they were crying poverty and saying they couldn’t afford a boost to benefits or tiny wage rises.

Nurses, health service and frontline workers are going beyond all reasonable expectation to keep our families safe and the number of deaths down. Yet these are people who have been undervalued for decades by consecutive governments and employers.

Our health service, our care homes, our domiciliary care workers have been treated as it they were expendable, when they are actually crucial. The most precious of our public services have been vandalised by cuts while our unions, the only practical means of defending ourselves and fighting back, have been systematically weakened and marginalised.

The community response to the crisis has been brilliant. Care, solidarity and cooperation have been the hallmarks of public response. This contrasts with the actions of governments and corporations which have put protecting the “economy” and profits ahead of protecting people and public health.

We want all workers to receive a tax-free payment of £1,500, plus four additional bank holidays per year. That would be an acknowledgement of all that workers have been put through. Fine words from Government are no longer enough.

Globally, one percent of the population holds almost half the world’s wealth. We need a new system. But this will only come about through working class people across national boundaries beginning to shout out as one.

The COVID-19 pandemic has begun an awakening. People are analysing and questioning the lives they live and the world they live in.

Traders, hedge fund and private equity managers carry on regardless, hiding behind their buddies in government while being portrayed in much of the media as the only people who can pull us through the present predicament, get the economy moving again and so forth. If they are not on board, we are told, no recovery will be possible.

Our political system has done nothing to challenge this devious assumption. There are few political parties which genuinely represent the interests of working-class people.

Politics has taken power away from the people moved towards the major corporations. This is a reality all over the world, our world.

This takeover of control by a ruling class comes with a decline in real wages and a raft of laws to hamstring union organisation. We need a determined fight back.

Under the old way of doing things, PPE was not seen as really important. But the same establishment had no problem when it came to stockpiling private wealth or extracting profit from wealth created by the labour of working people.

The NHS, social housing, education, mental health services, community-based social care have been deprived of funds and support while obscene amounts of money are spent on missiles, bombs, drones and all the high-tech machinery of war, which benefits no one apart from arms manufacturers and war-mongers.

The UK has the sixth biggest defence budget in the world. It is set to reach £55 billion this year. A fraction of this, £18.3 billion, could more than cover the cost of a year’s furloughing of workers.

The total spend on UK military bases is £141 million a year - enough to double the supply of medical ventilator machines.

Military budgets and the arms trade are causing untold misery. A government of the people would invest this money in areas such as green energy, creating jobs which would encourage global solidarity and protection of the planet.

In Derry and the North West, the crisis has unified people - but has also put a spotlight on the local legacy of deprivation, poverty wages and a run-down of public services. We also have the unreasonable situation of two diverging public health responses to Covid-19 on a small island, increasing the threat to lives.

Our lives cross the border every day. But we have diverging health services, diverging employment laws and diverging welfare systems.

We cannot allow working people and communities to bear the burden of Covid-19 on top of a public health and economic crisis.

We need a new direction for society, towards equality and justice.

THE RIGHT TO ORGANISE AND JOIN A TRADE UNION

AN END TO AUSTERITY

THE EXPANSION OF PUBLIC SERVICES

AN END TO THE ARMS TRADE