Guest Column : What being a Catholic means to me

In the first of a new 'Guest Columnist' feature in the Derry News, Erin Hutcheon writes about what her faith journey means to her 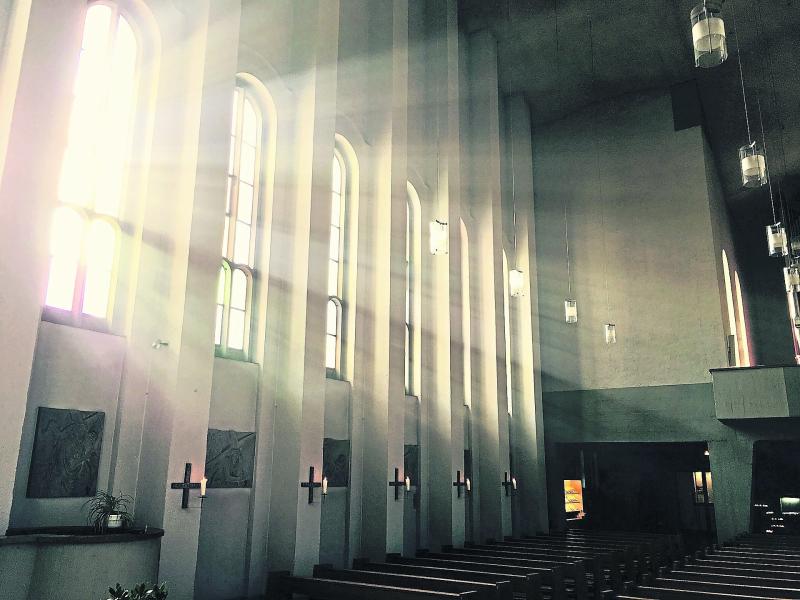 Being a Catholic is a hugely important part of Erin Hutcheon's life.

I’m a Catholic. There, I’ve said it. It wasn’t that hard really. The truth is that I don’t always wear my Catholic badge with pride.

There are things that I like and dislike about the Catholic Church, but I am a practising Catholic, and in a world where that isn’t always the coolest thing to say, I don’t mind saying it, out loud.

I’ve always been a believer, I was raised in a devoutly Catholic family. I remember the pride in my parents’ faces at church when a woman pointed at me and my brother and sisters, and said she’d never seen a family so well-behaved at Mass.

My faith had good foundations because of the people around me. My earliest memory of church is being taken to Benediction with my granny, nose pressed to the seat in front of me as I knelt, listening to the priest recite lines and lines of Latin phrases that I couldn’t understand. The memory of my granny’s wrinkled hand in mine guiding me through the Rosary beads, and the smell of incense is as real to me now, as it was then.

As a teenager, I went to Mass every night, something I kept a closely-guarded secret from all my friends. I didn’t want to be called a 'Holy Joe.' While my friends were all getting part-time jobs in what was the newly-opened Foyleside in the early 1990s, my first job was in the priests’ house, where there was always a stack of black shirts that needed ironed.

After moving to Belfast in 1996 to attend Queen’s University, my faith seemed to drift. I did attend a few events in the University Catholic Chaplaincy, but the freedom of living away from home and the pub culture meant my churchgoing took a hit.

It didn’t bother me. I attended Mass sporadically over the years – Christmas, weddings, funerals, and whenever my parents forced me to. I hadn’t stopped believing, but that need to go to Mass just wasn’t there anymore.

I suppose as I’ve got older I had been thinking about my faith more, and a chance opportunity to attend Lough Derg in 2015 changed everything for me. I was working as a journalist and was asked to attend with a group of pilgrims from the Derry Diocese along with Bishop Donal McKeown. I thought nothing more of it than that it would make a good story.

The three days I spent on the island ended up being much more than research for a newspaper article. The peace of Lough Derg, and the break from the constant distraction of the modern world gave me the space to reconnect with my faith. I hadn’t been to Confession for over 20 years believing it to be outdated and unnecessary, but at Lough Derg, I experienced a new, grown-up type of confession that differed from my childish practice of rhyming off sins.

Now, aged 42, I hope I have a much more mature attitude to my faith. I don’t hide the fact that I go to Mass, because I really don’t care what other people think about that.

But being a Catholic, and someone who is not afraid to say they are a Catholic comes with its own challenges. The Church has been through difficult years with issues that can never be brushed under the carpet.

Many of my friends, while they don’t share my faith, have the deepest respect for it. On a recent weekend away to England with buddies, I announced on the Saturday night that I was going to find a chapel to go to Mass. Instead of going alone, I ended up taking ten people along with me.

I know that in the most difficult situations in my life I have felt God’s presence with me. That can sometimes be a difficult statement to make, when being a card-carrying Catholic and a woman of faith is something that is so easily ridiculed in modern society.

I can’t say I do, or will ever agree with all aspects of the Catholic Church. The Church has much work to do. More recognition must be given to the vital role played by women, and I hope some day that church will be more accepting of same-sex relationships. I’ve seen first-hand the upset caused to my gay friends who have felt abandoned by the church.

My faith will always be important to me. Because I’m so vocal about it, I’m often stopped by people who ask me to pray for a special intention for them, light a candle, or even asked where is the nearest place they can buy a Mass card? Faith is something that should be cherished. I feel hugely grateful for having it in my life. I enjoy volunteering for my parish by the little bits and pieces I do to help. I am very grateful for the people around me who respect my faith, and those who share it with me. I suppose I still fear the 'Holy Joe' label, because I know I’m far from a Holy Joe, but I suppose there are worse things I could be called.

Erin Hutcheon is PR and marketing officer with the North West Regional College. She was previously a journalist with the Derry Journal.