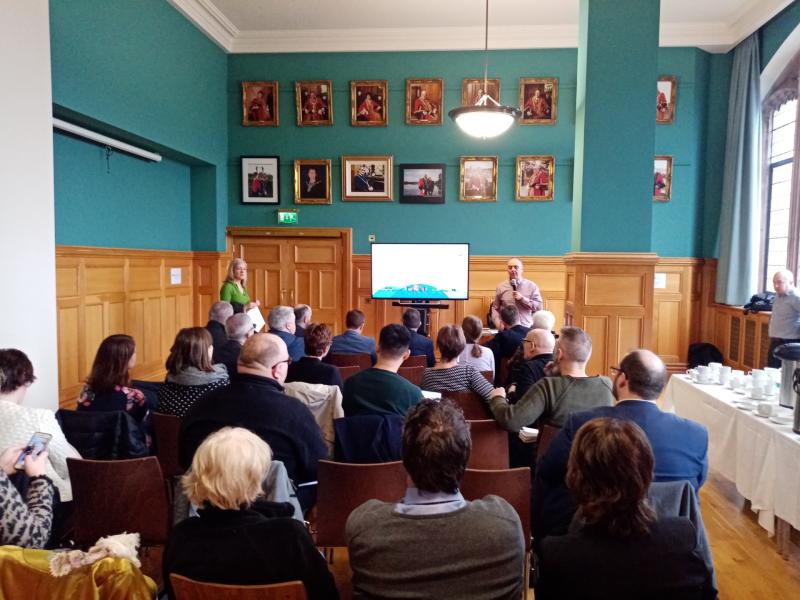 The Derry public has been assured that the city’s drinking water is safe despite concerns around chemicals at Mobuoy dump.

At public meetings, government officials were challenged to urgently deal an estimated one million cubic metres of waste at the Mobuoy “super dump” on the outskirts of Derry. The River Faughan which forms the western boundary of the site supplies the city with 60% of its drinking water.

Stakeholder meetings held on Tuesday evening in Strathfoyle, and yesterday at the Guildhall, heard that remediation works at a dump with three times the amount of waste as Mobuoy in the South of Ireland will cost 27 million euros.

The overall cost, which includes construction of a multi-purpose public park will rise to 60 million euros, and there will be an annual cost of 1.5 million euros to treat leachate - water that has percolated through the solid mass of waste containing various dangerous chemicals.

The clean-up cost at Mobuoy has been estimated at a minimum of £20 million - and potentially as much as £100 million.

Presentations were given by the Northern Ireland Environment Agency (NIEA), NI Water and a delegation from Kildare County Council who spoke of their own landfill remediation project at a former sand and gravel quarry in Kerdiffstown.

On Tuesday evening a number of campaigners voiced concerns during and after the event.  They expressed fears about contaminated water which they linked to an increase in Alzheimer’s disease and dementia.

MLAs and local councillors attended both meetings including those from the SDLP, Alliance, Sinn Féin, People Before Profit, the UUP and Aontú.  The River Faughan Anglers were also on hand to question the statutory authorities yesterday.

Head of Regulation at NIEA, Mark Livingston, began the meeting by providing an overview.  He said that ongoing criminal proceedings meant that a lot of the detail couldn’t be made public and they are “trying hard” to bring those responsible for illegal dumping to justice.

Mr Livingston explained that minister at the Department of Agriculture, Environment and Rural Affairs, Edwin Poots, has urged him to “move faster” as he wants Mobuoy “resolved”.  Minister Poots did however rule out a public inquiry last month.

An extensive plan has been put in place between NIEA and NI Water to mitigate any risks, particularly to drinking water, he added, which is being tested on a daily basis.

Alison McMullan, Head of Quality and Compliance at NI Water, assured the public that Derry’s drinking water is safe.  Water extraction could be shut down if the “alarm goes off”, she said.

If such a problem did arise, water could be brought in from Ballinrees reservoir in Coleraine and Lough Hill as a short-term measure.

A £12m investment to improve “pipe works” over the next couple of years will make that sustainable in the long-term if there was a risk to water at Carmoney water treatment works in Eglinton.

Ms McMullan ran through different chemicals which people had raised concerns about being present in Derry’s drinking water.  She gave assurances that chemicals such as arsenic and manganese are present at safe levels, and no different to other areas in the region.

When asked by a member of the public whether she would drink water with arsenic present in it, she said without hesitation, “yes”.

The audience member contested that there are “no safe levels” of arsenic or manganese as exposure to such chemicals can have a long-term damaging effect on the brain and lead to dementia.  “This is life and death, it’s a Mad Max scenario,” he added.

He claimed that his Zerowater filter indicated there are high levels of chemicals in local drinking water.

Former SDLP councillor Gus Hastings was also told that nothing of concern had been discovered in the city’s drinking water as chemical levels “are staying as they were, and staying low”.

The site consisted of an extensive recycling facility, a lined landfill cell, which had been partially filled with waste, and large unlined areas of the site in which substantial quantities of waste have been deposited.

In January 2011, a major fire developed within the mass of mounded waste material which required the intervention of a number of state agencies.  The fire couldn’t be put out with water and a company from the Netherlands had to use liquid nitrogen to put out the blaze at a cost of four million euros.

The site contained 3.1 million cubic metres of waste which is equivalent to 165 Derry Guildhalls.  Residents living in the area were subjected to foul smells, due to methane gas, and had to block their chimneys to stop the smell from infiltrating their homes.

Remediation work at the site has been ongoing for the past ten years.

This has involved re-profiling the site, moving of waste and material, to address current over-steep slopes to allow the installation of a capping system and to allow for surface water drainage.

Capping the waste to prevent rainwater entering the waste, and therefore reducing leachate production, and to facilitate management of landfill gas and odour, with the type of capping varying to suit the waste in each area.

Management of leachate to transport it from the site to the Osberstown Waste Water Treatment Plant.  Landfill gases also have to be managed to capture and burn them in a landfill gas flare.

Plans are now in motion to develop and construct a multi-use public park incorporating football pitches and other social amenities.