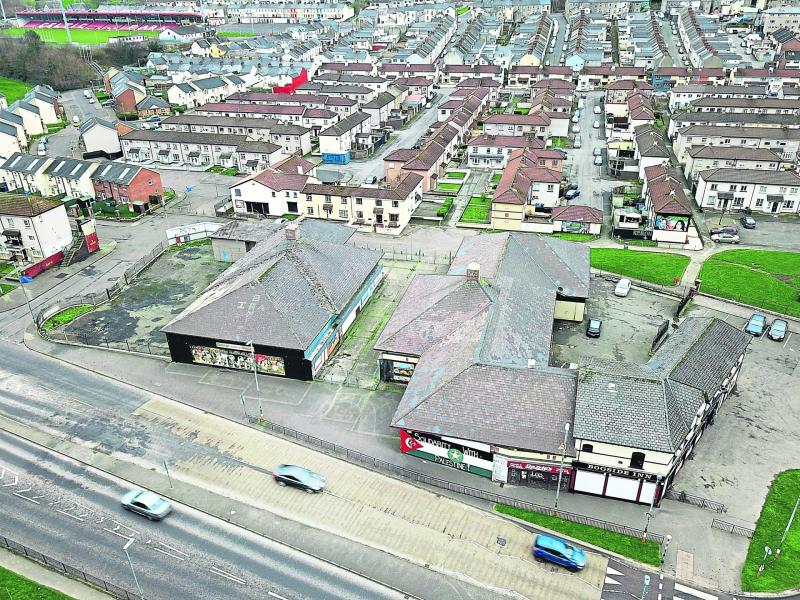 An aerial photograph showing the area that is to be redeveloped. Photgraph by Aidan Campbell.

A famous Derry bar in the Bogside will be demolished and rebuilt as part of a major regeneration project, the Derry News can reveal.

The Executive Office (TEO) and Urban Villages (UV) initiative have been planning to redevelop the vacant Meenan Square site and surrounding area “for a range of purposes” incorporating youth and community facilities, social housing and small commercial units.

It has now emerged that the Bogside Inn will be included in the second phase of development with locals suggesting it could happen in the next eighteen months.  It’s understood that the new bar will face on to the Lecky Road Flyover.

A spokesperson for TEO said: “TEO is taking forward plans to transform Meenan Square working with Apex Housing Association and other statutory agencies.  These plans are subject to business case approval.”

Addressing the bar itself and whether it is included in TEO’s plans, he added: “The Bogside Inn is in private ownership and any decisions lie with the owner.”

Most of the commercial units at the site have been vacated and Denis’s Wee Shop, which is inextricably linked with hit Channel 4 comedy Derry Girls, will move out in the coming days to a temporary unit nearby.  It has been accommodated in plans and will reopen once complete.

Construction work at the site is expected to commence in March.

Local representatives have again stressed that the views of Bogside residents must be taken into account throughout the process.

Independent Councillor for the Moor area, Gary Donnelly, said the last tenants will move out in days and demolition work is anticipated to commence shortly.

He added: “Any development as long as it’s in the interest of the community is positive.

“It’s important the views of the local community are taken on board particularly those who live nearby.”

Sinn Féin Councillor, Patricia Logue, welcomed news that work is set to begin and said she hopes proprietors can be resettled in the community.

“If there are consultations I would urge the community to have their say.  I would like to thank all those involved in getting it to this stage, especially UV, Triax, Dove House and everybody else that has contributed.

“Much needed social homes will be built as part of this so that also has to be welcomed.

“To get it to this stage was a lot of hard work and it’s good that it has now been finalised.”

She added: “The Bogside Inn will be part of the overall scheme but not in this phase.

“During demolition I would urge residents to be mindful and to contact the relevant people to ensure it can be managed in the best way.”

The vacant Meenan Square site has been at the centre of controversy for a number of years due to persistent anti-social behaviour and illegal bonfires.

The UV initiative had for a long time intended to redevelop the site, however, an unknown purchaser bought the land in 2018 and discussions have been ongoing since between the owner and UV to reach an agreement.

Overseen by TEO, the UV initiative is designed to improve good relations outcomes and develop thriving places where there has been a history of deprivation and community tension.