A Derry woman who teaches Irish dancing to underprivileged girls in Bangkok says she has been overwhelmed by the response to an appeal for dancing shoes. 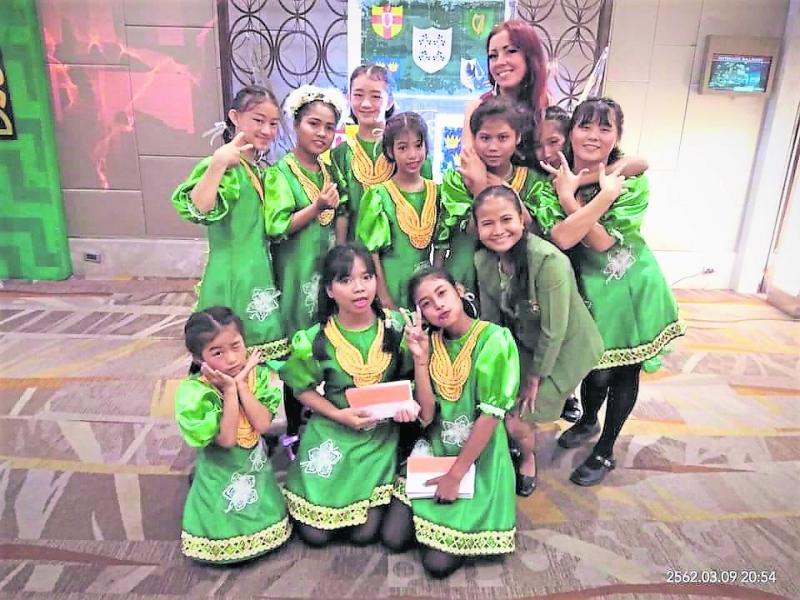 Derry woman Caoimhe Deeney pictured with the dancers who make their own costumes but have no Irish dancing shoes.

A Derry woman who teaches Irish dancing to underprivileged girls in Bangkok says she has been overwhelmed by the response to an appeal for dancing shoes.

Caoimhe Deeney, 30, has been volunteering at the Good Shepherd Sisters' residential home for orphans and impoverished girls in the capital of Thailand for 18 months.

While staying with the Good Shepherd Sisters, the girls are able to pursue their studies and learn skills such as hairdressing and dressmaking.

As part of their extra curricular activities the girls at the home, which is run by an Irish nun,  perform a reel at the St Patrick's Society of Bangkok's Emerald Ball every year.

Last week their dance teacher Miss Deeney,  who also works as a kindergarten teacher at an international school, put a message on Facebook asking for 14 pairs of Irish dancing pumps for this year's big performance.

It was shared by Derry's Facebook legend Pat Ramsey and she was soon contacted by two women from the city who wanted to help out.

"Mairead McLaughlin Ferguson reached out to me first and when I explained what it was for she offered to give all 14 pairs of shoes plus socks and tiaras.

"That was the really lovely thing, my original post didn't say anything about the girls' backgrounds but people still wanted to help.

"Just today I was contacted by a second Derry woman, Clare McCafferty, who offered to donate five pairs of shoes, so hopefully they will be able to share it between them.

"People are just so good and want to help."

Miss Deeney began volunteering with the Good Shepherd Sisters' residential home after joining the committee of the St Patrick's Irish Society in Bangkok. Founded in 1962, the St. Patrick’s Society's mission is to promote the cultural and social values of Irish people.

"I met some of the committee members by chance at the opening of an Irish bar in Bangkok, including Derry man Kevin McHugh and they asked me to get involved," she said.

"It was lovely to meet someone from Derry because it's a bit of a home away from home.

"Through the St. Patrick’s Society I met a nun called Sister Louise who has been a missionary for 40 years and she asked me if I would help get the girls ready for their performance at the ball."

Despite only having been to Irish dancing lessons for a year or two as a child Miss Deeney agreed to help and she was soon putting the pupils through their paces.

"I was able to show they how to stand and how to point their toe an do the jumps right," she explained.
"The girls love Irish dancing and they make their own dresses.

"They recently performed at an Irish Embassy event and it was so lovely because they are showcasing our culture to diplomats from around the world."

Miss Deeney says the girls will be over the moon when they see the kind gifts arrive from Derry.