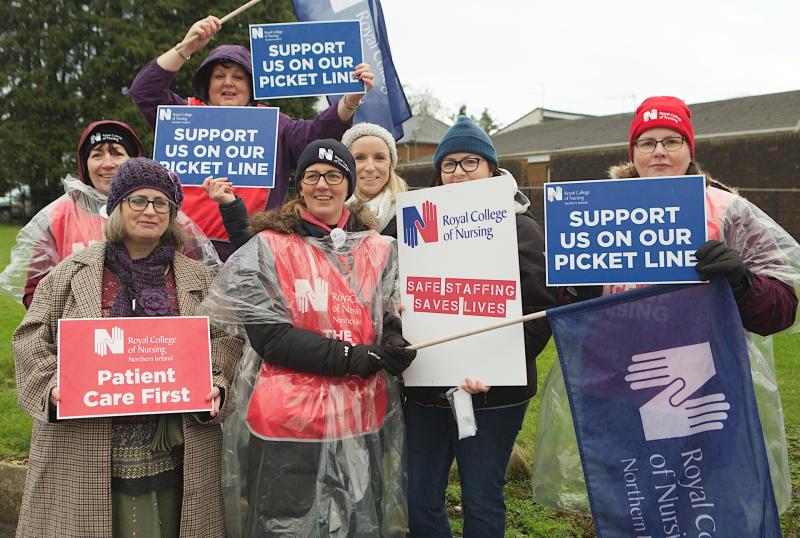 Healthcare workers in Derry joined thousands of colleagues across the country on picket lines to demand urgent action to address unsafe staffing levels and deliver pay parity with Britain on Friday.

It took place a matter of hours after the publication of ‘New Decade, New Approach’ - a document aimed at restoring devolved government in Northern Ireland.

There was some hope overnight that industrial action would be suspended given that the draft proposals set out in the document committed to measures including pay parity, a new action plan on waiting times and much needed reforms in health and social care.

However, the deal still had to be signed off by Sinn Féin and the DUP, with the Royal College of Nursing (RCN) saying: “The executive has not been reformed and the industrial dispute remains unresolved."

Therefore, on a cold winter morning, January 10, RCN and UNISON members took to picket lines at Altnagelvin Hospital and Gransha for a third day of strike action.

Speaking to the Derry News, Altnagelvin Nurse Noreen O’Hagan (below, second from left), said the poor level of pay has led to a decrease in nurses entering the profession.

“Staffing levels on wards aren’t safe and we are unable to get essential training, including online e-learning tasks, which means that our skills aren’t being kept up-to-date.

She continued: “Everybody is just demoralised which causes a bad atmosphere and when you’re networking with other wards it can lead to ill-feeling there because you’re having to ask someone to come down and look after a patient in the x-ray department, but at the same time they can’t leave their own departments because they’re so understaffed.

“Patients in the x-ray department aren’t safe because staffing levels are inadequate.

“This is our third day on strike with no pay which is essentially a week’s pay for a lot of people.”

They remain resolute in their fight for patient safety and pay parity, saying they are willing to take additional strike action if a deal is not agreed. 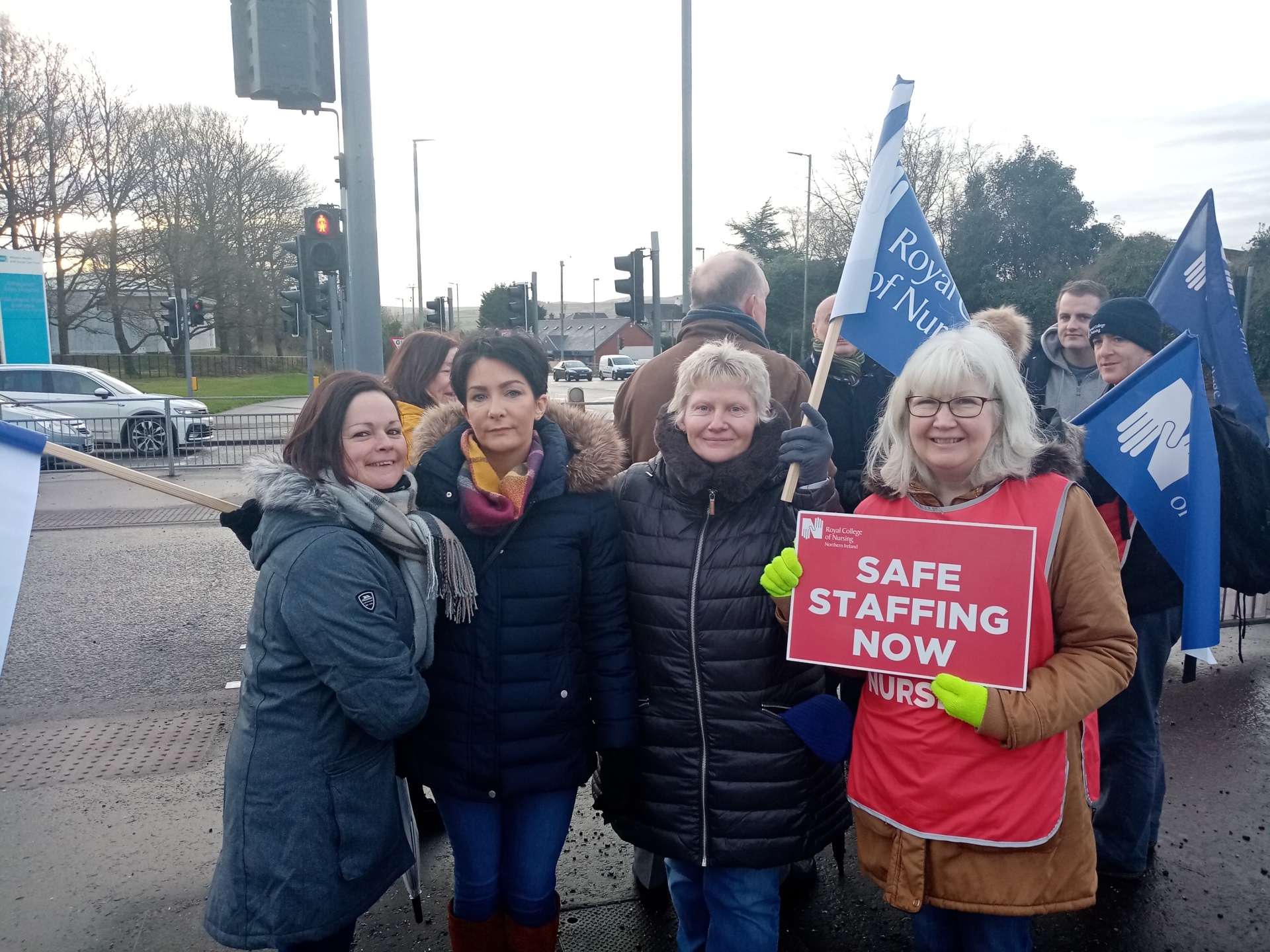 Alan Philson, nurse and UNISON member from Waterside Hospital, along with fellow nurse and RCN steward, Andrew Doherty (below), said they are “struggling” to deliver the level of care patients expect.  “We’re here today to say enough is enough,” Mr Philson said.

“Most wards in Altnagelvin, and across Northern Ireland, are short nurses – maybe two or three a shift – and that means we are working in environments that are unsafe where nurses are overstretched.

“The other component is obviously pay, and nurses here are paid significantly less than their counterparts in other parts of the UK.”

Staff are “disappointed” that they’ve had to take further action, both men explained, and they criticised the Secretary of State, Julian Smith, for using health workers as a “political football”.

“Even when Stormont was up and running they stopped pay parity with the rest of our colleagues in Great Britain, they had the Bengoa report and Transforming Your Care, but we didn’t see anything on the ground.

“The people who are on the ground are struggling, and bit by bit people are leaving, going over to England, Scotland and Wales or going down south where they get paid better.”

They described the ‘New Decade, New Approach’ deal as a step in the right direction but believed it still wasn’t enough to resolve the dispute.

Mr Doherty added: “It all looks good in principle, but until we have a health minister in place then strike action will probably continue.”

Pubic support for the workers was still evident, drivers constantly honked their horns, and people even arrived with food for the striking workers.

“A lady just pulled up earlier with a boot full of scones, all the public support and comments on social media are overwhelmingly behind the action we’re taking so we’re reassured by that.” 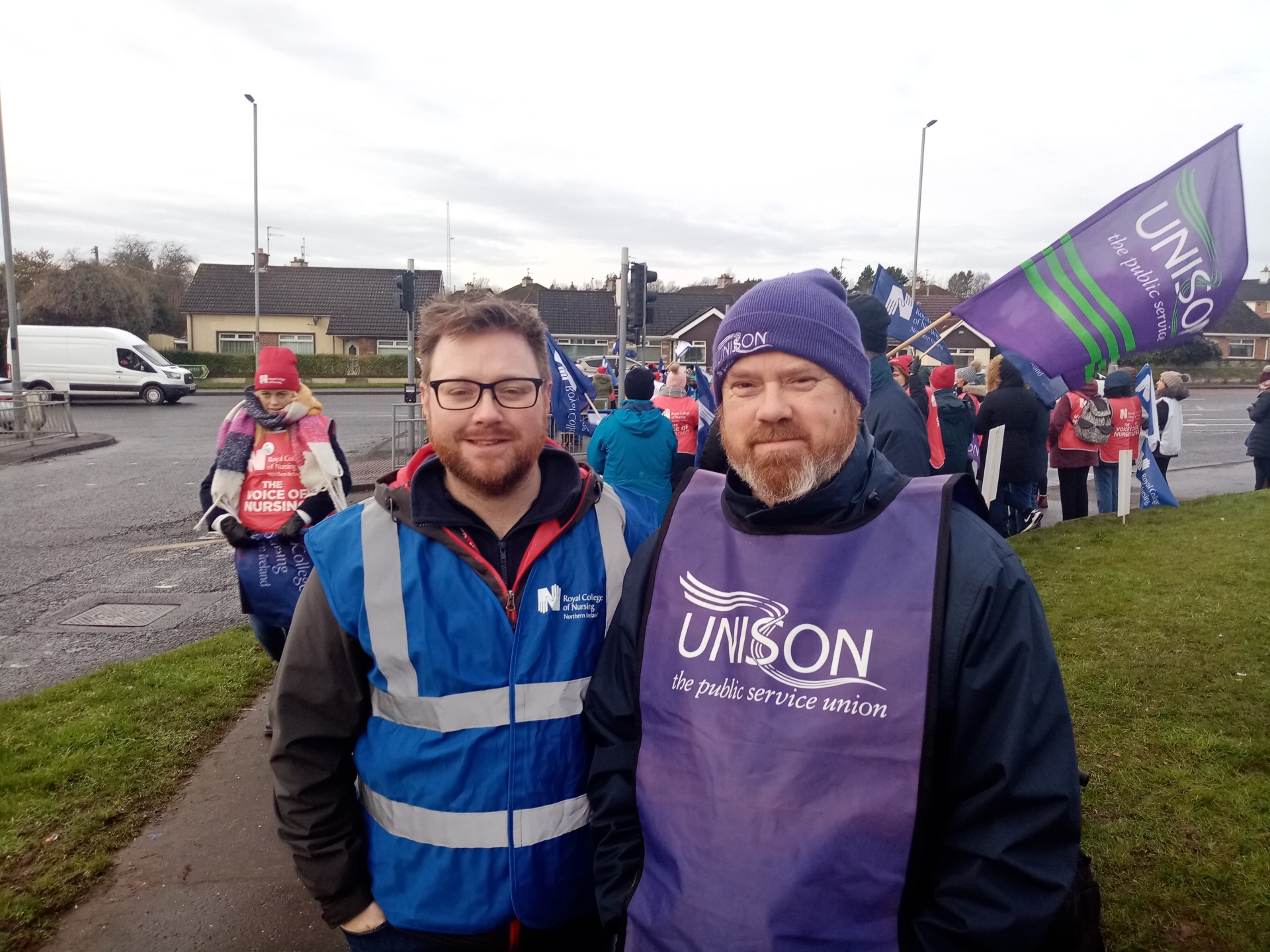 The Western Trust experienced widespread disruption to hospital and community services on Friday.

Almost 400 outpatient appointments were cancelled along with 50 inpatient procedures/day cases.

At Altnagelvin Hospital all morning out-patient clinics were cancelled. Potential impact on laboratory services were identified due to reduced transport.

It was also anticipated that there would be greater pressures on urgent and emergency care services, including Emergency Departments.