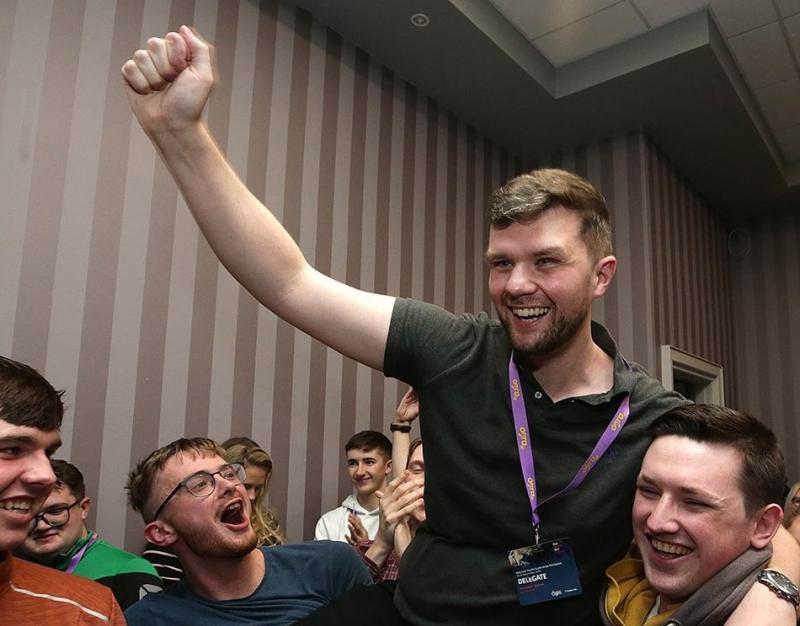 Derry man Aíndríu MacPháidin has been elected as the National Policy Director of Ogra Fianna Fáil.

A Derry man has been elected as National Policy Director of Ogra Fianna Fáil for the first time in its 44 year history.
Aindríu MacPháidín, a 26-year-old apprentice lawyer from the city, was elected into the leading position of the party's youth wing at its National Youth Conference in Portlaoise last weekend.
With his appointment Mr MacPháidín becomes the first person from the North to hold a seat on Fianna Fáil's Ard Comhairle via it's youth wing's representation on the party's ruling executive.
The Derry man has also confirmed that a branch of Ogra Fianna Fáil is in the process of being established at the Magee campus of Ulster University. Ogra Fianna Fáil already operate cumainn at major third-level educational institutions in the Republic as well as at Jordanstown and Queen's University Belfast. Membership of the youth wing is open to those between the ages of 16 and 30.
Asked what attracted him to Fianna Fáil as opposed to a nationalist party in Northern Ireland, Aindru told the Derry News: "I looked around and and there was no party in the North which represented my views. They had views on the peace process, the economy and economics which interested me. Unification is never going to happen until the North becomes stronger economically."
A party wide review carried out by Fianna Fáil in 2006 uncovered strong support within the organisation for the establishment of an activist base inside Northern Ireland.  It was subsequently decided at the party's 2009 Ard Fheis to establish a forum in each of the six counties of Northern Ireland, to better facilitate party members residing there who wish to meet and engage with Fianna Fáil public representatives and members. The 2015 National Youth Conference was held in Newry, the party's first conference in Northern Ireland.
"Ogra Fianna Fáil has organised on a drip-feed approach and has taken things progressively in order to make it sustainable. I am proud that I am the first person from the North to hold an Ard Comhairle seat from with Orga Fianna Fáil,"  Aindríu MacPháidín continued.
Asked about the much publicised link-up between Fianna Fáil and the SDLP earlier this year, the newly installed National Policy Director said that many prominent figures from the southern based party have already been on the ground in Derry campaigning for Colum Eastwood's bid to take the Foyle seat at the upcoming General Election.
Dara Calleary, Fianna Fáil's deputy leader has been pictured in the city canvassing with the SDLP and Aindríu MacPháidín says it's thought that party leader Michael Martin is also poised to come to Derry on the campaign trail.
The Derry News also asked Mr MacPháidín for his thoughts on how Fianna Fáil will fare in a General Election anticipated for the Republic next year.
He said: "I don't think Fianna Fáil will achieve an overall majority - I think those days are gone. I think we will emerge as the largest party but will form a government in a coalition. People like what we are saying on the doorsteps about housing and climate change on which no action has been taken by Fine Gael."