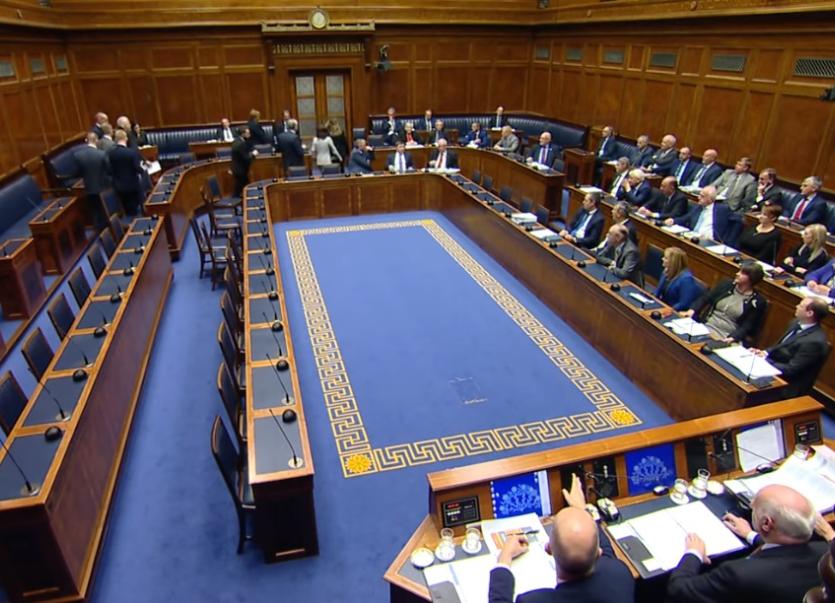 Scenes at Stormont this week have been branded “farcical” after the first official meeting of MLAs in over 1000 days failed to get off the ground.

A last-ditch attempt to block abortion law changes in Northern Ireland led by the DUP failed, with the law changing at midnight on Monday.

Unionist parties, who oppose the upcoming liberalisation, triggered the assembly's recall with a signed petition.  Members of the SDLP were also in attendance.

But Speaker, Robin Newton, informed MLAs that the Assembly had to elect a speaker and deputies with cross community support before any other business could take place.

That became impossible when SDLP leader Colum Eastwood declared he wasn’t willing to facilitate a “unionist talking shop” and led his party out of the chamber.  As they made their way out cries of “shame” were shouted by DUP MLAs.

As a result of their leaving no nationalist representatives remained, meaning no new speaker could be elected and the sitting was suspended after less than an hour.

Jim Allister accused the SDLP of thwarting the formation of an Assembly and said they were therefore thwarting legislation to protect the lives of unborn children.

The DUP later walked out, vowing that this was not the end of the matter and they would seek to challenge the law.  Mrs Foster said it was a "shameful day" which would leave Northern Ireland with Europe's most liberal abortion laws.

They were swiftly followed by the UUP after Robin Swann labelled the day’s events a “pantomime” and called on the Secretary of State to consider whether there is any future for the NI Assembly.

Some unionist assembly members had been attempting to introduce the Defence of the Unborn Child Bill 2019, which they hoped to pass by midnight.

DUP MLA Paul Givan argued the point as to why it should happen having sought legal advice from the Attorney General. The DUP leader Arlene Foster implored the Speaker to share his legal advice with MLAs.

However, Mr Newton - who was elected as a DUP MLA - resisted attempts to persuade him to suspend assembly rules to allow the bill to be introduced.  Legal advice was sought, he said, and he was content with the guidance provided which is “confidential and privileged”.

In July, MPs at Westminster passed legislation which requires the government to liberalise abortion and extend same-sex marriage to Northern Ireland if devolution is not restored by 21 October.

Monday's sitting was the first time the assembly had sat for nearly three years.