Analysis: A breakdown of Derry's win over Fermanagh

Rory Gallagher's side have won their first two games 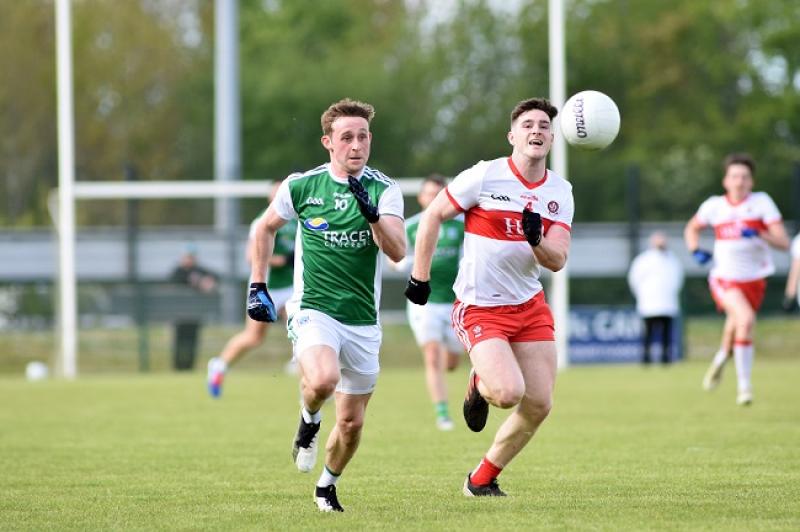 Derry's hammering of Longford had a slight chance of slipping under the radar, but Saturday's mauling of Fermanagh will have eyes and ears firmly on Rory Gallagher's side.

The Oaks' devastating counter-attacking game of power, mixed with organisation, has made a mockery of what was deemed a group of death.

There is an obvious attacking unit, with Benny Heron as the target. Niall Loughlin, Shane McGuigan and Paul Cassidy were always rotating.

On the face of it, Derry's game of waves is simple. With the ball, it's about getting angled support runs, to support the man in possession. After coughing up the ball, reverse gear is the first port of call as red and white jersies flooded back.

It sounds easy, but it's relentless and there is one main ingredient – athleticism. Hand in hand with a consistent starting team. Of their 10 games in league and championship under Gallagher, goalkeeper Lynch, captain Chrissy McKaigue and Brendan Rogers have played in them all.

Paudi McGrogan has missed one game. Shane McGuigan and Ciaran McFaul are both ever present. Emmett Bradley and Padraig Cassidy haven't missed much either.

Much has been made of the return of Conor Glass and he has put two solid performances back to back. His run to make the goal for Niall Toner was selfless.

But having Gareth McKinless back in the fold has totally changed the shape of Derry's defence.

No longer are they reliant on Brendan Rogers punching holes with runs from deep. Chrissy McKaigue can revert to a covering player, or do a marking job like the one on Sean Quigley.

“No goals,” an ever animated Rory Gallagher was bellowing in the closing stages. Derry needed a bit of luck when an unmarked Kevin McDonnell's flick came off the crossbar, but it kept their clean sheet intact.

Add in the level of competition for places. Karl McKaigue has a club game under his belt and was involved in the warm-up on Saturday. Paul McNeill came off the bench and there is still Conor McCluskey as a serious defensive contender.

That kind of competition should drive the standards up and if Derry can muster a fourth consecutive clean sheet against Cavan, it will do a lot for belief. Only Offaly's Aaron Leavey has found the back of the Derry net since the Oakleafers conceded three goals against Cork in Páirc Uí Chaoimh last March.

Two examples from Saturday's win highlight Derry's reverse gear. When Ciaran McFaul dropped a shot into goalkeeper Chris Snow's arms, it was Ethan Doherty and Niall Loughlin who stopped the play with a foul at the half-way line. By the time Fermanagh built their attack, Derry were set up and it was Shane McGuigan's interception that stopped it. That's the organisational side of their game.

Another was sheer hard running from Paudi McGrogan to get to the goal side of Declan McCusker in a swift Fermanagh breakaway after McGuigan was bundled over at the other end of the pitch.

You can also throw in Padraig Cassidy's block on James McMahon, at the expense of a '45' after he allowed the Fermanagh man to initially get past him.

After his sloppy kicks cost Derry two early points, Odhran Lynch's distribution was exemplary and there was more length to the strategy. On the other side of the coin, Derry's hunger, positioning and power in the middle third left Fermanagh living on scraps from their restarts. Of Snow's 12 kicks only three found a green jersey.

On the front foot, hard running has helped 14 different Derry players amass their 5-34 across two games. Of that tally, 4-23 has come from play. And while McGuigan is still the chief marksman, their running game offers them so much more.

Their use of Owenbeg's width gave Derry a channel to attack and every time they went on the offensive, there was a cutting edge.

Derry's first two scores were examples of how they made use of the width of Owenbeg. For Shane McGuigan's point, midfielders Conor Glass and Emmett Bradley were hugging both opposite flanks as Derry attacked and when the ball was fed to McGuigan he swung his shot between the posts. It was a patient and measured response to an early speed wobble.

Derry's first goal was a mixture of all they had to offer. Conor Doherty's deft pass to Benny Heron, Padraig Cassidy coming with a late, angled run. And then there was Ethan Doherty's turbo boost. He sped clear of the Fermanagh cover before rocketing a shot to the roof of the net.

Like the Longford game, Derry's half-time lead, 1-7 to 0-6, while topping the stats in all the right places, is bound to have been head-scratching. During the first-half, there was often one pass too many and moves would break down.

The second-half was a total wipe-out. Ciaran McFaul, who missed three chances in the first-half, backed himself to thump over a monster score in the opening seconds.

Then, when Stephen McGullion coughed up cheap possession at midfield, Derry tore them to pieces. Ethan Doherty did well to keep his footing and the ball under the pressure of a challenge before sending Gareth McKinless through for Derry's second goal. It was a fitting score, with Derry's two key performers involved.

Then a McGuigan and McFaul combination put Fermanagh's light out completely. McFaul was dragged to the ground by Josh Largo-Ellis and McGuigan slotted the resultant penalty to the net. When Fermanagh were down to 14, Derry inflicted more pain with another two goals.

McFaul's pass opened Fermanagh up to find McGuigan for Derry's fourth , as the home side hammered home their superiority.

Substitute Oisin McWilliams swung over a first senior point of his career and fellow impact man Niall Toner drove a fifth goal, low to the net, after a move on the opposite flank pulled Fermanagh of their shape.

Two games and two wins. It's four victories from the last five games.

The manner of the past two weeks lays down a marker to the rest of Division 3. It's Cavan next, but the promotion semi-final to follow, that's where Derry's championship season starts.