An insight into the growing Baha'i community in the County Derry town. 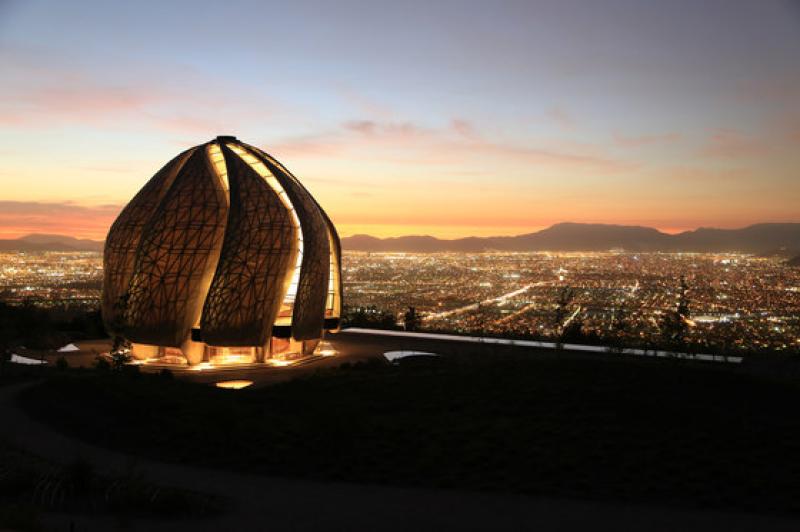 The Baha'i temple in Santiago illuminated at prayer time.

Built in 1995, it is home to Leslie and Mahin Gornall and provides a base for Mid Ulster’s burgeoning Baha’i community.

The Baha’i faith is one of the world’s newest religions, founded just 200 years ago. Its teachings are based on the essential worth of all religions as well as the unity and equality of all people.

Leslie, a retired environmentalist and 2016 Anaerobic Digestion and Bioresources Association (ADBA) Hero of the Year, explains that the Baha’i faith believes god sends a messenger to earth at regular intervals.

“God has never left man to develop without guidance and that guidance appears every 500 or 1000 years," he said. "God made flesh, if you like, in this world.

“That is not to say the old teacher did a bad job. For example, if you don’t do primary maths, you’re never going to do University maths later.”

“The Baha’i faith says that the origin of all religions are rays of the one sun, but they come at different times,” adds Mahin.

“All of them say the same thing, but if you are a 12-year-old child, who hasn’t heard about a particular divine teacher, you go to hell. That is what most religions say.

“In order to advance further, the people of planet earth must become united. That’s the message of Baha’i. We respect all the messengers and all religions.”

That Leslie, a native of Stevenage in England, and Mahin, originally from Persia, came to meet and eventually reside in Magherafelt is not so much a twist of fate, but a corkscrew.

The couple met at a Baha’i winter school in Derry after Mahin and a friend found themselves homeless for Christmas.

She says: “My friend and I were studying in London and they used to throw the students out over Christmas.

“We had nowhere to go but my friend saw an advert for a winter school in Derry, but we had no idea where that was!

“My friend said it was close to Scotland, so in the end we got the train up, the boat across and that’s where I met Les.”

By then, Leslie was already working and living in Mid Ulster and an active member of the Baha’i community there.

Said Leslie: “I was doing a PhD and needed a soils laboratory with special drains so that any spillages can be washed.

“There was one at Traad Point Ulster Freshwater Laboratory outside Ballyronan. I needed somewhere to stay – there are only swans down there – and I ended up in Magherafelt.”

“I had learnt about the Baha’i faith in a mud hut in the Kalahari Desert in 1968 and I became registered in 1971 when I came back from Africa.

“I just saw it as the fulfilment of the Christianity that I knew. Mahin and I met in Dr Keith Munroe’s house at the Baha’i winter school.”

The Baha’i community in Magherafelt is part of a global network of local and national assemblies which culminate in the Universal House of Justice, with each assembly made up of nine representatives. 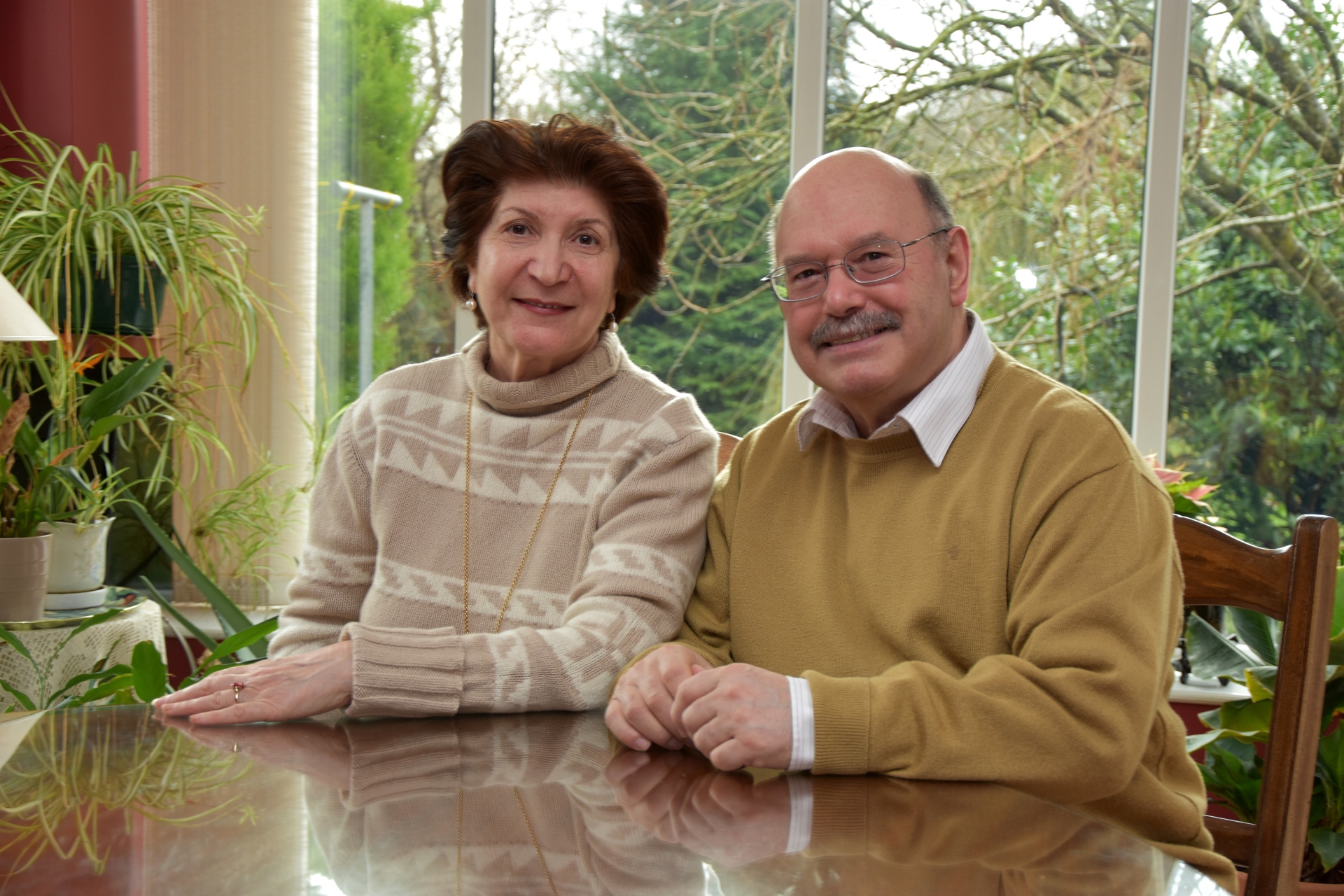 PICTURED: Mahin and Leslie Gornall pictured at their home just outside Magherafelt

Leslie adds: “In other religions they say ‘follow the leader and be good’ but with Baha'i, it’s a little bit more difficult because we don’t have a priest or clergy of any sort.

“The local institution is called the Local Spiritual Assembly. They are elected by secret ballot, once a year, from the community.

“That same principle takes place every year on a national basis where the local assemblies gather together to elect the National Spiritual Assembly.

“Then all the national assemblies, every five years, elect the Universal House of Justice.”

Baha’is also live by a different calendar – a merging of the solar and lunar calendars that Leslie describes as ‘mathematically beautiful’.

He says: “If you took a photo of the full moon over a church spire in Magherafelt, and were asked when you could next take that photograph, the answer would be 19 years.

“The solar and lunar calendars reset themselves to zero every 19 years. So, every 19 years is a unit of time and in every year, there are 19 months, each having 19 days.

But 19 x 19 is only 361, so how does the Baha’i calendar dovetail with the 365-day calendar used throughout the world?

“There are four inter-calendary days that align the solar and lunar calendars, with five in a leap year.

“We celebrate the birth of Bahá’u’lláh and of the Báb, commemorate both their deaths and make an effort to create gifts that for each other.”

Each month begins with a Community Action Meeting, with the local meeting held at Leslie and Mahin’s Solar House.

Baha’i in the area comes together to pray, discuss any issues in the community and report on any actions taken.

Baha’i houses of worship are renowned across the globe for their beauty and innovation. Les says this is not a coincidence.

“There are strict instructions on how to build a house of worship – it’s not just a tin hut in the middle of the desert.

"It has to be built with the very best expression of the human spirit.

“They may not necessarily be the most expensive, but they are incredibly beautiful and have won architectural prizes all over the world.

“The latest one in Chile was built with a form of recycled glass referred to as transparent stone.

“When the people are praying, the lights are on and the light from the building projects itself across Santiago.

"You can see it for miles, this gentle illumination from inside.”

"The Baha’i way is perpetuated on a series of 52 virtues – one for every week of the year – but when asked to condense the faith to a single word, both Leslie and Mahin had different interpretations.

“Service. That doesn’t mean servant, but that we human beings are approaching the stage of maturity where we can be noble enough to serve our fellow man.

“It is a mighty, noble, wonderful thing that a human can do.”

With such a selfless, pluralist message at its heart, it is easy to see why Baha’i is the world’s most rapidly growing faith and, with Leslie and Mahin’s boundless energy and enthusiasm driving the community forward, it will no doubt continue its expansion here in Mid Ulster.