Superb result for Rainey on the road 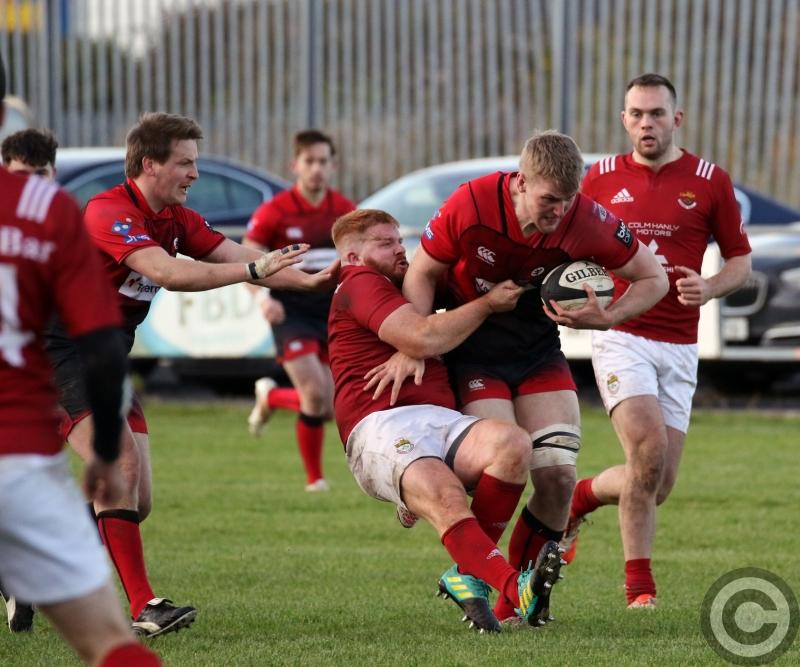 The game of the day in AIL Division 2A was at Spafield where top three sides Cashel and Rainey Old Boys provided a cliffhanger of a contest which had a dramatic climax.

Cashel had won all three of their previous meetings but Rainey emptied the tank to come away with an 18-15 victory which must rank with their best displays ever.

The long journey home will have been a most satisfying few hours.  While the overnight rain had ceased in Tipperary, it was bitterly cold at an exposed venue where a strong diagonal wind was to play a significant part in a memorable game.

The home side totally dominated the opening quarter, their big, strong pack hammering away at the Rainey line and their backs moving well when brought into the action.  The tackling had to be of the highest order to keep them out and it was.  But after 12 minutes, the pressure eventually told.

Cashel opted to go for a try instead of taking the points on offer and, when their forwards did their bit, sucking in the Rainey defence beneath the posts, they moved it wide to take full advantage of the space created.

Rainey seldom crossed the halfway line as Cashel pinned them deep in their own 22'.When Cashel knocked on, the advantage was played, but when Andy Magrath's left footed attempt to find touch under pressure failed to earn his side any respite, the referee allowed play to continue, much to Rainey's annoyance.

A number of decisions later in the game were to further infuriate the visitors and it was hardly surprising that there were a few skirmishes from then on.

Cashel made it 10-0, their second try almost a carbon copy of their first, before Rainey gradually began to gain a foothold in the game.  Holding their own well in the scrum and driving through as a unit, the pack excelled to give the backs some ball at last and they were unfortunate not to be rewarded for their efforts.  John McCusker saw yellow towards half-time, to be followed shortly afterwards by a Cashel forward.

Rainey had a dream start to the second-half.  Driving from the tail of a lineout on the 22',the forwards forced their way up to the line before the ball was opened out for centre Fitzsimons to go in for a try which Magrath converted.

A turnover allowed Cashel to break up the left wing in style, but Rainey scrambled back to halt a dangerous situation and Bloomfield put his side back downfield with a great clearance. Rainey were awarded a very kickable penalty, but the award was reversed when the touch judge intervened to speak to the referee.

However, a few minutes later, Magrath made it 10-10 with another perfectly judged kick from 40 yards.

A scrum penalty handed Magrath another opportunity and again he came up with the goods.  It was to get even better when, from another scrum, Bloomfield nipped down the blindside to beat the cover and dive over for a brilliant try.

Cashel were not finished, however, and worked their way upfield to reach the Rainey line only to be held up.  From the ensuing scrum they drove again to score, the conversion again missing the target.

The restart drop out put Rainey back on the attack, but a rare loose pass allowed Cashel to hack their way to the other end of the park, causing great anxiety in the Rainey ranks.  Magrath came to Rainey's rescue, finding a little gap to send Cashel scurrying back.

Deep in added time, Rainey forced a penalty not far from the posts.  After  some consideration, they chose to go for the corner to run the clock down, but lost the lineout.  Cashel used their backs to break away up the left and then across field where a clear knock on seemed to have saved Rainey.  To their misbelief, the referee allowed play to continue and awarded Cashel a penalty seconds later.

Rainey were not surprisingly incensed, this being the last play of the game. From a relatively simple spot on the 22',the kicker pushed his effort past the posts, much to the delight of a relieved, but deserving Rainey team.