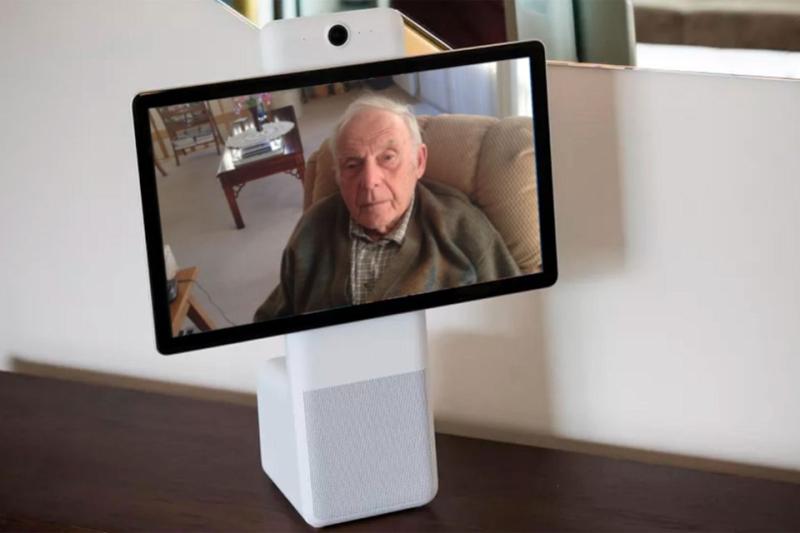 Residents of a Derry care home are now able to maintain regular contact with their family members during the coronavirus pandemic thanks to a generous donation from a local businessman.

Older people in care homes across the city have been struggling with the current government-imposed lockdown restrictions which prohibit visitors.

Those residing at one local home, which didn’t wish to be named, can now communicate with close family on a daily basis via Facebook Portal – a modern video chat technology device.

A member of the public brought the kind gesture to the attention of the Derry News.

It emerged that local comedy writer Ciaran Murray, best known as the man behind Pure Derry, purchased the portal for the home.

His mother and father are both residents and he saw the value in it for, not only his own parents, but all residents living in the home and by extension their families.

When Ciaran discovered that a staff member was using her own phone to set-up video calls he offered to source the equipment which now allows residents to communicate more effectively with family and friends.

Ciaran’s own family were coming to terms with their parent’s illnesses when the coronavirus outbreak first surfaced and they realised instantly that it would present a ‘massive obstacle’ to communicating with them.

He commented: “I would prefer to have donated anonymously but with my platforms I realise there is a chance to do some good and highlight the issue.

“This is a huge emerging need in care facilities and whilst they should be stepping up to provide this technology given the situation, we all realise that goodwill will get the solution in place quicker.

“With both my parents isolated for the foreseeable I wanted to make sure we could still communicate with them.

“I knew that the other families would also get the benefit though, and it’s been incredible to hear about all the ‘visits' from abroad already!”

“In normal circumstances people can visit their elderly relatives to wave in the window or drop off food.

“However, dementia affects memory and comprehension, so my mammy and daddy wouldn't understand why we’re outside the window waving at them without coming in for a hug, it can get really upsetting.

“From that point of view the video technology is great. They respond to it and know it’s us, but they recognise we aren’t actually there.”

He added that the sad reality is the longer the pandemic, and in turn isolation and social distancing continue, these calls could be the ‘last goodbyes’ some people have with their parents.

Given that older people are one of the most ‘at risk’ groups Ciaran believes it is likely that care homes could remain under lockdown for a while meaning this device could assist families long-term.

A quiet room has been set aside for residents to use the technology.

It has allowed them to connect with family members in Derry but also those in England, Scotland, America and Canada.

The beauty of the device is that it enables conference calls so several family members can connect at the same time.

Ciaran added: “I’ve got a couple of really lovely videos of people singing with their mother.  They’re all booking chats in with relatives and it allows different family members to join in.

“In the current climate it ends up being a family catch up at the same time where I can talk to my sister too.  It’s a difficult situation but it’s the best that we can do.”

Through his LAB fund and Pure Derry Ciaran is heavily involved in buying and funding the production of Personal Protective Equipment (PPE) for frontline workers.

He’s raised over £15k selling the remaining 500 copies of his 2013 book, Pure Derry.  Your Derry have also donated £5k from their LAB Fund - a community crowd fund launched last year.

Ciaran now hopes others will follow suit and help local care homes put this technology in place by donating money or technology.