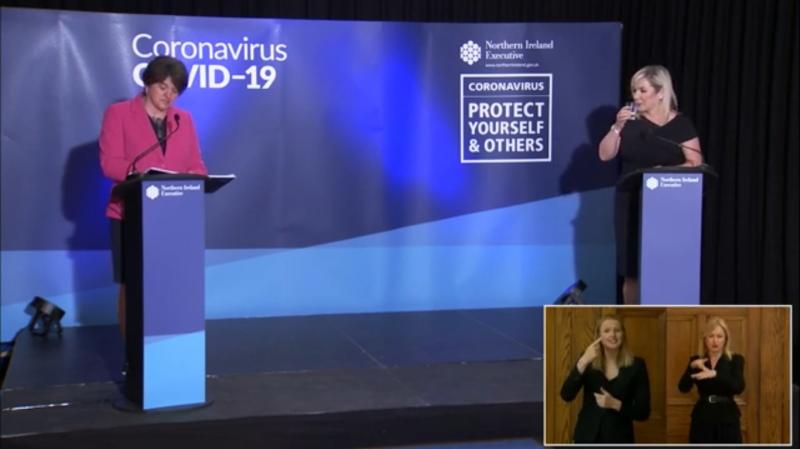 At today’s COVID-19 press conference the country’s leaders doubled down on their message for people to ‘stay at home’ when pressed about the possibility of lockdown restrictions loosening.

First Minister Arlene Foster said the collective effort is ‘far from over’.  Northern Ireland is still in a ‘critical moment’ during the first wave of the pandemic, she explained, and with one misstep the country faces the prospect of the virus reproduction rate going back above one – increasing the spread.

She added: “Now is not the time for government and businesses to gamble with peoples’ lives, we need to proceed cautiously and ensure that we’re doing everything we can to prevent another spike from occurring.”

Governments around the world are ‘wrestling’ with the dilemma of ‘when is the right time to lift restrictions’, she said.

The press conference heard that the decision to open cemeteries was criteria led and based on scientific advice.

“The Executive will continue that on every decision we reach relating to COVID-19 but you also, the greater Northern Ireland community, have a role to play,” the DUP leader said.

She acknowledged efforts made by the public through social distancing and isolation and recognised that people want to leave the confines of their homes.

But added: “Now is not the time for impatience to get the better of us.  No-one should act as if coronavirus has been beaten, it hasn’t, and we still have some way to go.

“If people go back to gathering in large numbers in public spaces and if they do not listen to the guidance on social distancing then they run the risk of another spike.

“Having come so far in containing this disease it would be more than just a crying shame to undo that collective effort, it would be catastrophic for families, for communities and for a society as small as Northern Ireland’s.”

The DUP leader referred to the speech made by Boris Johnson this morning when he said that thought must be given to ‘relaxation’, the path plotted carefully and if the government moves too fast it may be forced to ‘slam on the brakes’ again.

Arlene Foster said: “That’s not what we want to do and we can’t afford to get too far ahead of ourselves.”

She reiterated the point that the government would be led by scientific and medical advice and urged people to stay at home when possible.

Deputy First Minister Michelle O’Neill said it is ‘disappointing’ to hear reports that some people have decided to relax restrictions themselves.

“That kind of attitude is wrong, it is reckless and it is endangering live.  Until a vaccine is found it means that we must co-exist with this virus.

“And that means a radical change to how we live our daily lives for some time.  For the most part people have been making personal sacrifices for that greater good.  And thank you for that.

“But we must keep going, we must save lives.  There is light at the end of the tunnel, there certainly is light, but we need to keep doing what we’re doing now in order to save lives and help our healthcare staff cope in our healthcare system.”

She praised the public and health workers and welcomed news of £6.5m of additional support for care homes which will help with additional staff to care for those in isolation and enhanced cleaning.

Restrictions will be reviewed up until May 9 but Arlene Foster again asked people to be patient.

In terms of contact tracing, a pilot is starting here this week and an App is being developed.

Meanwhile, Michelle O’Neill welcomed the British government stance, ‘albeit late’, of test, trace isolate - a policy endorsed by the World Health Organisation (WHO).

“The countries which have been most effective are those that have moved on this very quickly.

“Contact tracing needs to be rolled out right across the community because that is part of our success in being able to counter the position that we could find ourselves in later where, if you’re facing a second wave of this, that our ability to stop that will come down to how effective we are in contact tracing,” Sinn Féin’s Vice President added.

She encouraged people to ‘keep doing what we’re doing’ as it has ‘proven effective’.

Michelle O’Neill gave a figure of 412 deaths - 309 announced in total by the Public Health Agency (PHA) based on figures provided by health trusts – but said NISRA statistics would bring it up to 412.

When questioned about Sinn Féin leader Mary Lou McDonald’s comments that the pandemic is an ‘accelerant’ for a united Ireland, Ms O’Neill said an all-island approach to health ‘makes sense’ and is not a political point.

“We live on an island and it’s a natural advantage so it’s important we use that.”

While Ms Foster said her priority is saving lives and it’s ‘regrettable’ that other leaders are ‘naval gazing’ at this time.

The southern government is planning to publish a report outlining a strategy for the easing of restrictions.

When probed about Northern Ireland’s own lockdown exit strategy the First Minister did not indicate if that would happen in the North or indeed provide any timeframe.

Michelle O’Neill added that talk of relaxation feeds into public discourse before reinforcing the government’s key message for people to stay at home.