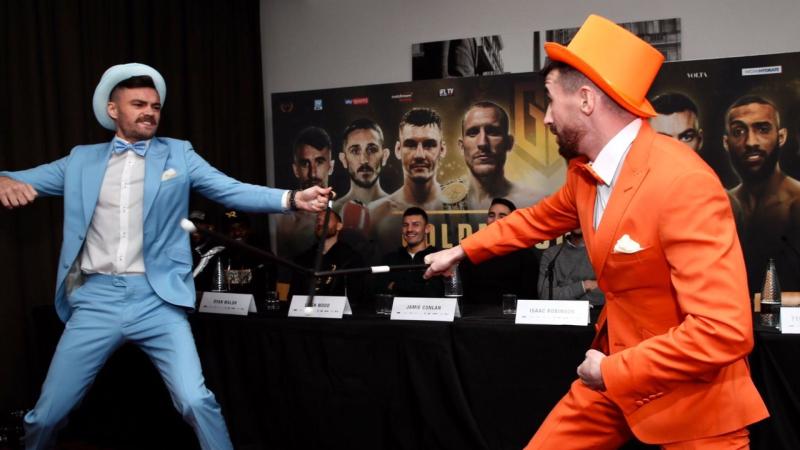 Tyrone McCullagh is quickly making a name for himself as quite the character in the boxing world and he took it to a new level entirely this week in the build up to tonight's MTK Global Golden Contract semi-finals.
Undefeated featherweight McCullagh (14-0) made quite the entrance at the press conference earlier this week ahead of his fight against British champion Ryan Walsh, appearing alongside close friend Tyrone McKenna dressed as the characters Harry and Lloyd from the film franchise 'Dumb and Dumber'.
Both boxers, known for their expansive sense of humour, recreated a scene from the original 1994 film, engaging in a walking stick battle, much to the bemusement of their respective opponents on Friday night.
The duo have been known to bring a sense of good fun with them wherever they go, and with both hoping to upset the odds to win a two year contract worth five fights and six figures, it seems the perfect way to decompress with the pressure now on.
McCullagh easily saw off the challenge of Sheffield's Razaq Najib at York Hall back in October, enjoying a unanimous decision victory, a performance which, in itself, was a strike back at the disrespect he felt aimed his way by former World Cruiserweight champion Jonny Nelson.
The skilful WBO European super bantamweight champion was the first man to make it into the last four of the lucrative competition which earns the winner a six figure deal and he is expecting to go one step further at least, even if he must take on arguably his toughest opponent to date in Walsh.
“It was just a laugh,” he said afterwards.
“These press conferences can get a bit serious and it was just something different to mix it up a bit. We're a bit like the real life Dumb and Dumber, me and McKenna, because we're always missing flights and stuff like that, so we just did it for a bit of craic. I have the same colour hair as Lloyd so I got Lloyd Christmas and he got Harry, so that was it.
“Some people took it more seriously than we did, but you can't be too serious. There's plenty of time after the weigh in or when you are walking to the ring, I can flip the switch then, but up until then it's a laugh and you have to enjoy yourself. How long are you going to be in these positions, doing press conferences on Sky Sports, so enjoy it and make the most of it.”

Challenging
The format of this competition is challenging for each participant with the draw taking place on Tuesday when a golden ball was added into the pot with the fighter selecting it able to choose their opponent from the three remaining fighters that selected the red balls. Walsh picked McCullagh, but regardless, each fighter has only three days notice.
“I could see why people would choose me,” McCullagh stated. “I have 14 fights, Walsh and Wood look very impressive and Jazza looked impressive in his own way in his quarterfinal, so I could see why people might have chosen me. 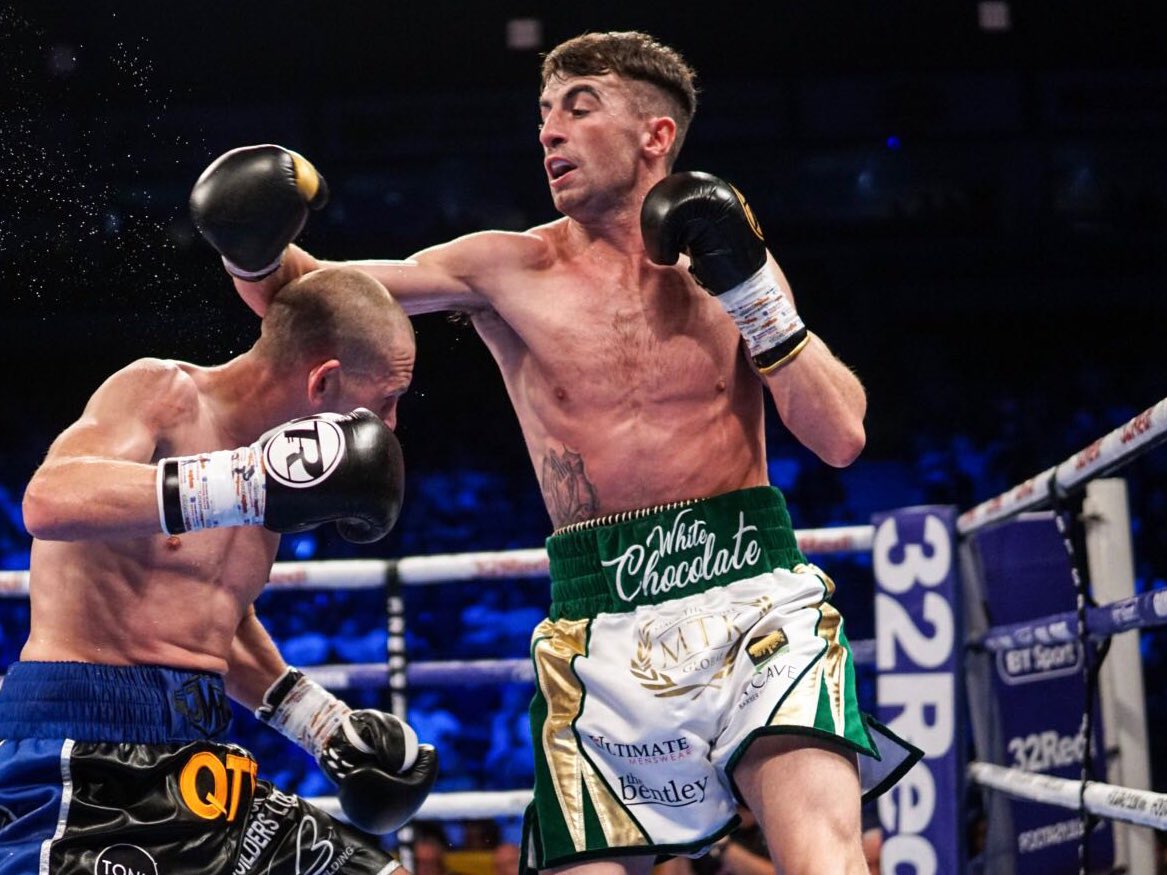 PICTURED: Tyrone McCullagh is just two steps away from a two-year 'Golden Contract' with MTK Global.

“But at the same time everyone knows I'm a bit of a nightmare, and awkward and difficult to box so I wasn't sure how the picking would have went.
“I was hap;py to get picked. I don't know if other people are lying but I really didn't want that gold ball.”
As difficult as this fight will be for McCullagh, it will be as equally as challenging for Walsh, with the Derry man known for his difficult style.
“Paddy Barnes always jokes that I bamboozle opponents and people always say I'm a nightmare to spar but no-one is unbeatable and I do make mistakes,” McCullagh explained. “It's been so far, so good and hopefully come Friday night I still will be.
“Ryan Walsh is a great champion and he is favourite for the tournament for a reason. He is a great, great fighter with a lot of great results. I know I'm in for a tough night's work. No one is unbeatable and I believe that if I box to the best of my ability, I can beat him.”