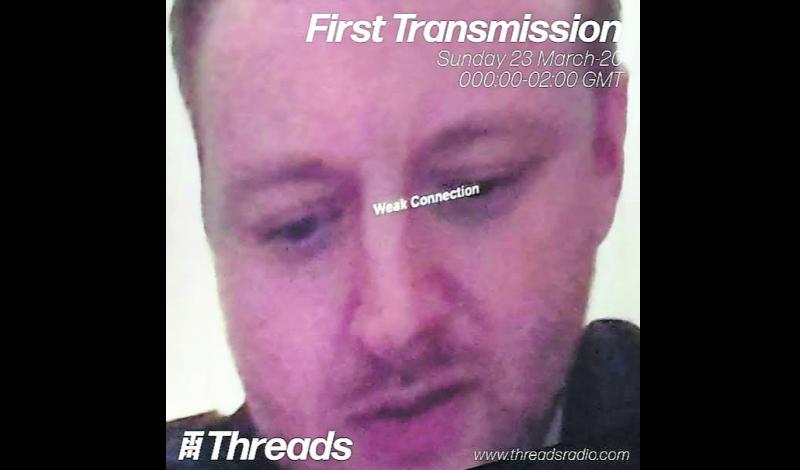 Stephen McLaughlin is a Derry-born; London-based artist. He creates dark ambient as An Trinse, lo-fi Techno as TFT and has the monthly show ‘First Trans- mission’ on Threads radio.

He also works as a designer and animator who has created multi-disciplinary work for clients including Nike and Adidas.

“With the An Trinse project I’ve always thought of it as being indebted musically to the surrealism of Nurse with Wound and later Coil with a heavy dose of Irish history in there.

“My techno records as TFT are much more straightforward and fit into the classic Dutch Clone/Viewlex template or L.I.E.S. I’ve enjoyed handing over the visual side to Ben Lee who is an incredible designer.

The current visual work with Maxwell Sterling stems from getting obsessed with Peter Greenway a long time ago and suddenly having an outlet for this baroque sensibility.

“Max’s work is so rich and cinematic I was instantly inspired to find a way to create a version of the layered theatrical world of Prosperos Books mixed with images generated via AI with painterly elements and I think we have arrived at a pretty individual visual soup.”

Any Irish stuff out there?

“Some of my favourite Irish music of the last few years has come from the label Fort Evil Fruit, they have built up a formidable discography over the last decade across the spectrum of experimental sound.

“Also, a big fan of From the Bogs of Aughuska as we share a love of the crossover of Irish History, drone, and black metal who I always thought deserved more attention, but I guess it’s a bit of a niche interest.

How was your lockdown?

“I can’t pretend I didn’t think it was the end of the world at the start but once we settled into the long-drawn-out boring apocalypse it has shaken up my work a bit. I was in great form, had just completed an An Trinse audio-visual show which premiered at one of CTM festival in Berlin’s associated events in January and was hoping to tour the projects throughout the year plus was in the process of setting up a celebratory gig for my split album with Il Santo Bevitore.

“I had also just worked on the visual direction of the NME awards which was one of the biggest projects I had overseen.

“That all went in the bin along with my main revenue source working as an editor and animator in the creative industry, so it was a very scary few months till everything stabilised a bit. I tried to use the time to collaborate with artists on music videos which crazily ended up helping on Kylie Minogue’s online show and directing a piece for Yousef and Gorgon City.

“I also ended up exhibiting work in some online exhibitions which has led to my current work with the Most Dismal Swamp collective but there was a lot of staring at the wall wondering where it was all going.

“Later in the year, I did some online gigs including a collaboration with Bratislavan artists Monika Subrtova which felt good if a little weird staring in a camera in an empty room.

The project with Maxwell came out of lockdown as well, we were both working on a video project with architecture collective The Decorators who were similarly trying to find ways to show work when everyone is stuck in the house.

“That project has just been shown at the V & A museum at the London Design Festival which was a bit of a dream come true.”

“I’m hoping that the show me and Maxwell are doing at MIRA festival in Barcelona is the start of something positive for the new year.  We were slightly shocked to get booked so early as we had so far only presented an embryonic version of the show once and was a bit of a disaster technically.

“We have done one more show since and its light years ahead now and very excited about presenting it on 15m screens.”

Any music over there you’d recommend?

“Well i would definitely say check out Max’s new album ‘Turn of Phrase’, I’m extremely excited about working on the live presentation and its without doubt one of the best albums of the year.

“My pal Yaws is also putting out some wild bendy tempo electronics that you will struggle to pin down.

“Also, if anyone is interested in the world of digital art and experimental music, I would check out Clot magazine ran by my wonderful other half.”