Magee on Music: Love in the Time of Cholera 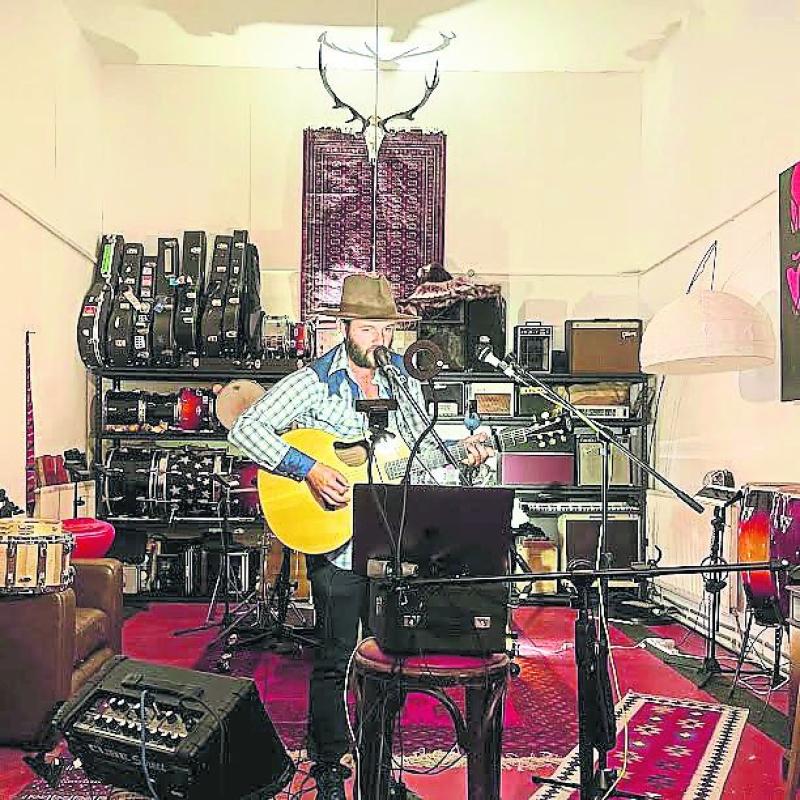 You shouldn’t really need an introduction to Keith Harkin, but if you really really do, the short version is he was once in Celtic Thunder (Phil Coulter's Irishploitation show designed to give Americans the real experience from the old country).

Then, he left and embarked on a solo career. That was about 13 years ago and since then he self-promoted, self-financed, self-wrote, self-performed and created and, more importantly, sustained a loyal and loving fan base.

What does a globetrotting musician do when trotting isn’t allowed though?

Some would sit back and do nothing, not Keith, he’s maintaining a recording studio and hosting regular stageit events online to meet the demand of his fans around the world who can’t get out to see him live (check out the links at the bottom).

The Barn Studios is Keith Harkin’s state-of-the-art studio. Complete with up-to-date technology and the most guitars I’ve seen in a personal collection, this place really is the ultimate haven for any muso and their family.

I’ve had manys a yarn with him about the state of music and the grind of touring, general music stuff but he once said to me 've worked my whole life to create a studio and now the Barn Studios is up and running with accommodation, the works open to the public.'

There are a few studios around, each offering something different in technology, location and staff so why build your own studio?

“I have been working in Studios all over the world and have always wanted my own. Not only that I wanted a studio that other people can enjoy.

"I wanted a studio that wasn’t stereo typical. I wanted A place that was a creative hub, a place creative people wanted to be.

"It’s like a wee fairy-tale down there, set amidst permanent tents and old Irish farm buildings, you really have to see the place to believe it.”

You’ve been around the block a time or two you must’ve been in some cool studios?

“I started out working in Metropolis Studios in London when I was 18 years old. Ever since then I’ve had the bug. I recorded my first album in Abbey Road studio One with the Abbey Road orchestra. And every other studio you can think of in Los Angeles.

“All the studios I have recorded into date were amazing places. But they still weren’t what I thought a studio should be. Most studios are stuck in the back of an industrial estate, or in a hectic city. I wanted to create a retreat.

“A place where you come turn your phone off and don’t leave until you have an album in your hand. Get absolutely taken over by the music and the work you’re doing”.

Besides working with and keeping up with his peers from Derry and Draperstown, even the ex-pats up in Belfast, he’s also participated with Austin Jenkins (formerly of White Denim) (and who produced Leon Bridges’ Grammy award winning album) with the help of Brett Dennen (famous American singer songwriter) and Enda Walsh (who has produced Van Morrison, Nils Frahm, Juliet Turner, Eleanor McEvoy, among many others).

This studio seems designed to be global and sits well in 2020. But speaking of home….

How important is an independent music scene and the records stores and people in it?

“Nowadays, it’s everything because you’re not selling out. I’ve had so many opportunities to go down the Michael Bublé route and do a covers album and it’s certainly a way easier way to make it.

“When I was signed to Verve you had David Foster, who invented Celine Dion/Michael Bublé/Josh Groban, who offered me a deal…I didn’t want to go down that road…. as hard as it seems for people to believe you have to buy music!”

In true Harkin animated fashion, he continues: “Everybody loves music but nobody wants to buy it, I sell CDs for $20 at shows and people don’t get that a CD itself isn’t worth $20, the same way £10 notes aren’t worth £10, people don’t see the music that took two years to write and two years of not getting paid, a live album that cost £80,000 which is just what it costs in America… and then the back and forth with artwork and the record labels… really, $20 isn’t anything and we all need to wake up and start paying musicians.”

You should or stalk Keith on social media like a decent human being and check out The Barn Studios on Instagram or go to www.harkinheadquarters.com/.