REVIEW: Rachael O'Connor steals the show and everyone's heart at the panto

The Drumsurn beauty is Snow White at the Millennium Forum 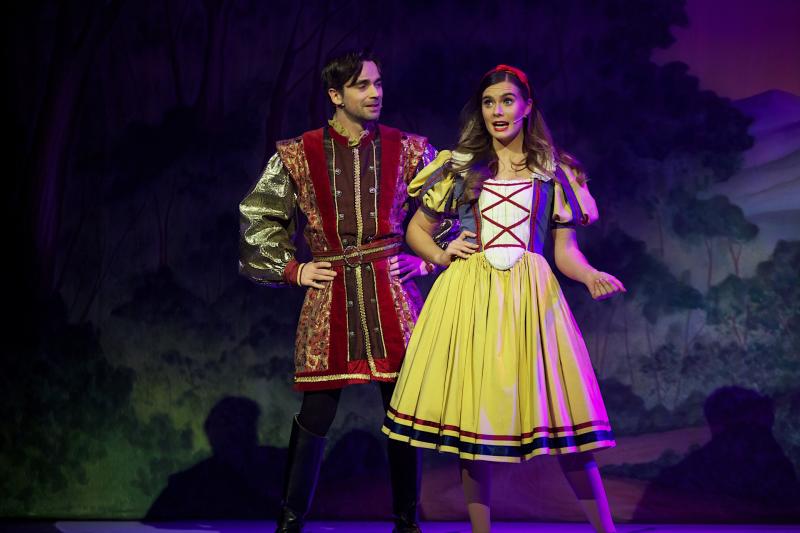 The biggest show in Derry's festive calendar kicked off this week and it certainly didn't disappoint.
Snow White and Seven Dwarfs at the Millennium Forum is everything a panto should be- all singing, all dancing and laugh out loud funny.
The Forum put on a professional panto every year with local actors and plenty local flavour, headed up William Caulfield as Nurse Molly Coddle.
Stand-up comedian William is now in his 14th year as the Millennium Forum Dame and hits exactly the right note with lots of caustic one liners for the mammies and daddies.
He is joined by Drumsurn's Rachael O'Connor as the beautiful Snow White.
Rachael, who fans will remember from TV's The Voice, has just finished touring the world with Michael Flatley's Lord of the Dance.
She is currently in the studio recording her own music and when you hear her sing it's easy to see why.
Rachael went to the Millennium Forum pantos as a child and and her infectious joy at playing the princess spills on the stage.
She falls in love with Prince Charming played by Connor O'Kane and the pair have a great chemistry together.
Every panto needs a villain and Karen Hawthorne is a fabulous Wicked Queen, whipping the audience up into a frenzy of hissing and booing.
Andrew Porter, who played The King in the Forum's Jack and the Beanstalk two years ago, is her hunchbacked sidekick who steals lots of laughs.
Audience favourite Keith Lynch as Muddles cut his acting teeth with the Londonderry Musical Society.
Theatre goers might also remember him in the title role of the Forum's youth production of Sweeney Todd and he has since gone on to appear in theatre, musicals and TV.
Muddle's big solo is well worth the wait and had audiences dancing in their seats.
Of course, no production of Snow White would be complete without the seven dwarfs and the Forum has cast a team of experienced actors including Letterkenny woman Tara Owens as Snoozy.
She joins Andy Herd as Grumbly who has appeared in Star Wards, Labyrinth and Harry Potter.
Andy's son Kyle has joined this year's cast as the accident prone Clumsy and it's lovely to see father and son on stage together.
As always the ensemble cast is very strong and the line up includes Leigh Chapman who is returning to the Millenium Forum for her sixteenth panto season.
She's joined by Mikey Jay Heath, Paul O'Neill, Adam Ashford, Zoe Kyte and Jessica McShane for some fabulous high octane dance routines put together by Vanessa Chapman, principal of the Rain School of Dance in Eglinton.
The very talented junior chorus is drawn from the Vanessa's school and have a stage presence way beyond their tender years.
Chief Executive of the Millennium Forum David McLaughlin is one of the country's most successful and prolific theatre producers and is the writer and producer behind the show.
His hilarious script keeps the show bouncing along nicely and includes some genius touches like Daniel O'Donnell as the magic mirror.
Jonathan Burgess has been directing pantos at the Forum since 2007 and it's clear the show has benefited from his extensive experience.
With fabulous music by Derry's Peter Vail and a stunning wardrobe by Helen Quigley the show, which is stage managed by Codie Morrison, is a sure fire hit.
Snow White and the Seven Dwarfs performs at the Millennium Forum until Sunday December 29.  Tickets are priced from £10.00 and are now available from the Box Office.  Telephone 71 264455 or visit millenniumforum.co.uk for bookings. There will be a Relaxed Performance & Dementia Friendly Performance on Sunday December 15 at 2pm and a Makaton Tutor Interpreted Performance on Sunday December 15 at 2pm.