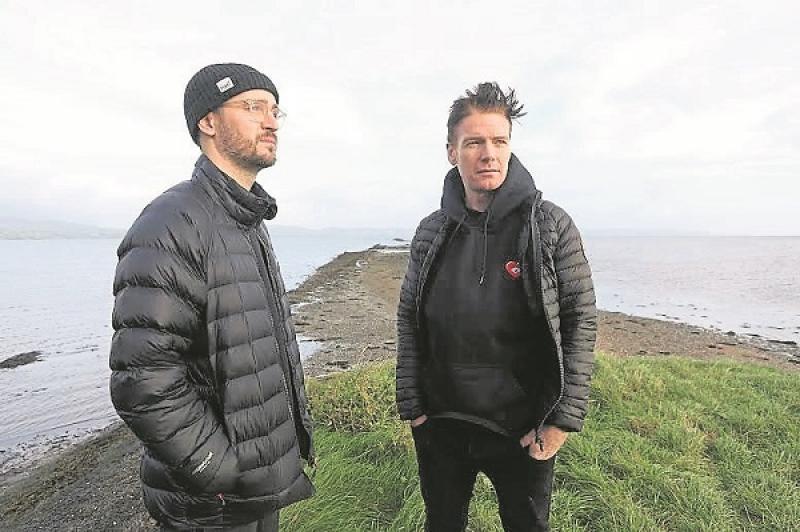 Ryan Vail and Elma Orchestra (aka Eoin O'Callaghan) who are performing in Mexico this weekend.

Two Derry musicians are taking their  ground- breaking audio-visual project, “Borders,” which began as a non-political reaction to Brexit, to Central America this weekend.

Two Derry musicians are taking their  ground- breaking audio-visual project, “Borders,” which began as a non-political reaction to Brexit, to Central America this weekend.

Ryan Vail and Elma Orchestra (aka Eoin  O'Callaghan)  will perform a specially adapted version of the piece in the city of Guadalajara, Mexico this Friday and Saturday.

The original production featured footage of the Foyle River, Grianán Fort and other border landmarks between Northern Ireland and Ireland, but for Mexico, this has been replaced by stunning new drone shots of the landscapes of Guadalajara – while the voice and words of Dublin spoken word poet Stephen James Smith on the track “This Island” have been substituted by those of Mexican poet, Elba.

Eoin said he hoped the piece, which  takes audiences on a cinematic journey, questioning what borders mean to people, would resonate with the people of Mexico.

“About two years ago I was working with other artists in Jalisco and happened to mention the 'Borders' project – it seemed to resonate with them – what with the US border and 'Trump wall' - and felt like something that needed to be performed there. We’d also always wanted to perform 'Borders' on a large scale and I already had connections with the Zapopan Symphony Orchestra, so creating this new version just seemed like a good fit.

“The original piece with Stephen James Smith focused on the way we live now and how it’s ok to be both Irish and British – so we wanted to do something similar in Mexico.

“Luckily, Elba understood and got what we wanted straight away and will perform her own version with us on the night.

“The crazy thing about the whole project was the drone shots; when I initially looked at them, I thought they were taken in Ireland, not Mexico. We were kind of disappointed as we were expecting cacti everywhere, but the coastal landscapes look just like Donegal.

"I guess it shows how much this is a global story – how lines are just man made and how this could have taken place on any country on earth.”

Supported by the British Council and the Arts Council of Northern Ireland, the pair will perform alongside the city’s Zapopan Symphony Orchestra – a full 60-piece orchestra - in their biggest gig of the year.

This is not the first time 'Borders' has been performed outside the North, with full capacity shows across Ireland, Britain and Europe, triggering a similar response with each audience.

“There have been a lot of tears. The reaction so far has been pretty emotional, even most recently, during our Paris performance, which was unexpected.

"People were seeing things in the visuals that we weren’t expecting, as they were left to interpret in their own way. The tears aren’t from sadness or depression though, but hope.

“There’s a real communal feel during the shows with a lot of people fed up with what’s happening in the world - it’s quite beautiful really, to be surrounded by a group people who feel the same way as you.

He concluded: “I think we’ll get a similar reaction in Mexico, if not more so – especially since we’re touching on their own problems and have Elba there to read her more personalised, local poem.”

Following Mexico, it’s going to be a busy few months for the pair – performing Borders in Berlin, Toulouse and across Britain.

Ryan said: “Next month we’re off to Berlin for the 30th anniversary of the fall of the Berlin Wall, followed by a full UK tour, then in March we’ll be playing at SXSW in Austin Texas. After that, we’re not sure, but it would be amazing to take Borders somewhere like Palestine or North Korea.”

Jonathan Stewart, director, British Council Northern Ireland, said it was an honour to bring “Borders” to a wider audience.
He said: “We’re delighted to support this project and help showcase Eoin and Ryan’s work internationally.

“The times we live in can be incredibly divisive, especially around the issue of borders, so it has never been more important for work such as this to reach wider audiences. 'Borders' is a mesmerising visual spectacular and creates a world where boundaries just don’t exist physically but can also be metaphorical, and we hope that this message resonates and captivates the audiences in Guadalajara.”

Borders will be performed this Friday and Saturday, 18 and 19 October, at the Centro Cultural Zapopan, Guadalajara.