Another step towards promotion for Limavady. 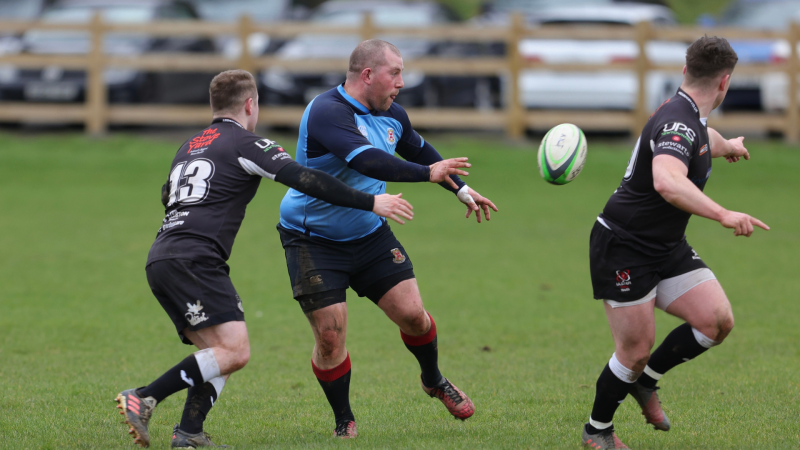 Limavady Back Rower, Stuart Simpson gets his pass away. Photos by Steve Haslett

Ards were the visitors to the John Hunter Memorial Grounds this week. With Ards seeking points in their relegation battle and Limavady vying for another victory in their push for promotion this game was always going to be a tightly fought affair.

With the game barely one minute old Ards took the lead as their full back fielded the ball and then slalomed his way through a group of players who just stood by and watched him as he raced in to score. The conversion was good.

To Limavady’s credit though they did not let this affect them and they hit back with two converted tries of their own within the next five minutes. John Purcell was first to benefit as he powered his way through and then, following a good break by wing, Brandon Maxwell, he was able to put his captain, Ben Riley, in to give Limavady the lead.

The Derry side recorded a comfortable win.

The rest of the half was very much both teams giving it their all. Right on the stroke of half time Limavady’s centre, Jim McCartney increased Limavady’s lead as he finished off a fine backs move to touch down.

As in the first half Ards were first to score some points as they converted a penalty. With the game toing and froing both sides came close to adding to their score line. With 50 minutes on the clock Jim McCartney again spotted a gap in the visitors’ defence and he was able to race in and score the all important bonus point try.

Back again came Ards and they were rewarded with a penalty try when a Limavady player was deemed to have deliberately knocked on. The game was finally settled in the last minute when prop forward, Jack McIntosh used his strength to hold off two defenders and dive in to score

This was a much better performance by the Limavady side from previous weeks however more improvement is still needed as there are some very stern tests coming up between now and the end of the season. Credit also to Ards for putting up an excellent performance, a performance which belies their current league position.

Next week Limavady travel across the mountain to take on near neighbours Coleraine in the Bank of Ireland sponsored Towns Cup. This will again be a close affair with both sides eager to progress to the Semi Final.

Limavady 2nds were also in action this week as they entertained Belfast Harlequins 3rd XV in the quarter final of the Forster Cup. Harlequins won by a close margin of eight points (9-17).

The EPIC awards will validate the contribution of volunteers.