McKaigue ruled out for rest of Derry season 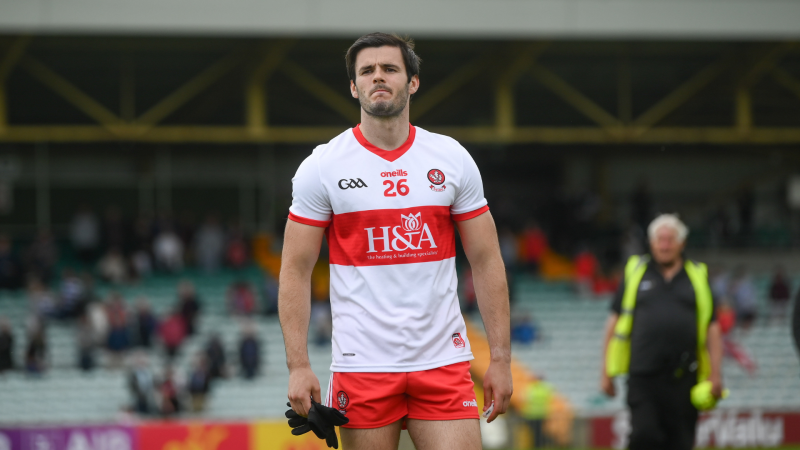 Derry manager Rory Gallagher revealed after the Oakleaf’s win over Cork on Sunday that Slaughtneil defender Karl McKaigue will not feature in the red and white until next year due to injury.

After recovering from an Achilles injury that saw him miss most of the 2021 campaign with Derry, McKaigue had been in the squad for this season, but Gallagher said he will not feature for the rest of the league and championship campaign.

“It's unfortunate and some sad news. Karl had a scan on his hip which he carried for a long time and he has to go and see a surgeon. Karl at this point is unfortunately not fit to train at the level,” admitted Gallagher.

“He is a player that I want to say I really appreciate for all his effort.

“When we got the job we very much wanted to work with him and he has just been very unlucky with injuries.

“That's an unfortunate aspect of the amount of training and games he's played but, please God, maybe some time next year we will have the option of getting him back.” 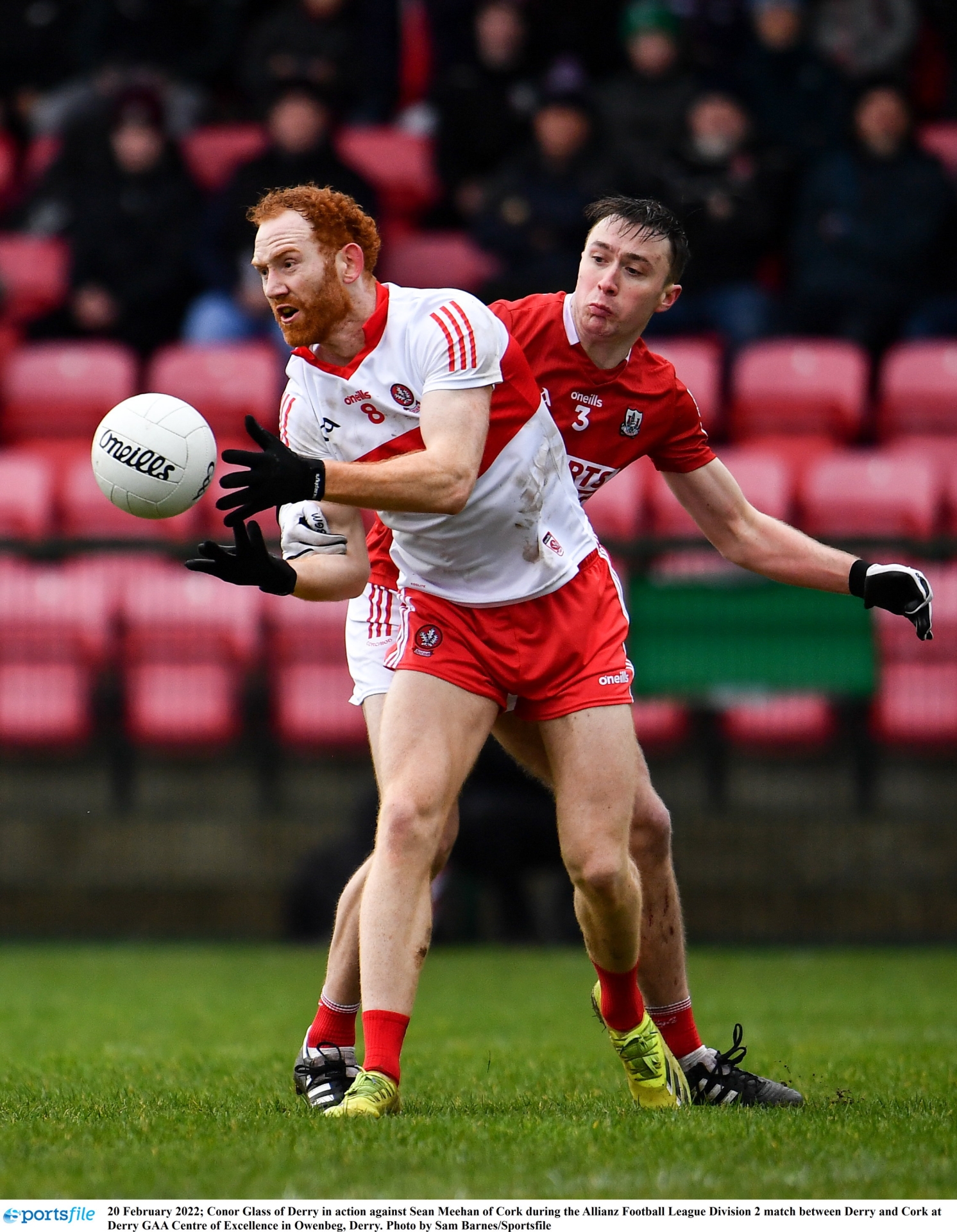 After wins over Down and Offaly, Derry went into Sunday’s meeting much higher in confidence than their opponents – who had one point on the board from their opening two games.

Eight points from Shane McGuigan and a second half goal from Benny Heron helped Gallagher’s team to a victory that always looked in their grasp – albeit he will be expecting them to take more scoring chances as the league progresses.

“It was very comfortable in the end in very heavy conditions, but I thought even in the first half we missed a number of goal chances and maybe over played it a bit.

“I think we should have been more than two up at half-time against a very strong breeze and in difficult conditions but look, happy with our start and looking forward to going to Clare.

“It would be nice to be coming up that road with eight points and guaranteeing your safety so you could really focus on trying to go to Division One then.”

Hugh Niblock, who had a successful GAA career, passed away at the weekend.

Gallagher continued: “Cork was a big milestone in our heads to be honest. The last game before Covid hit this country and hit the world we got a two-point annihilation down there.

“We got a few goals, but it was a shambolic set-up at the time and I don't think we have lost a league game since. We've lost a couple of championship games but we've turned a corner since.”

It was a game that always had the look about it that a goal for Derry would be the ultimate killer against a Cork team lacking in any momentum, but Gallagher stated that Benny Heron’s 44th minute major – which came seconds after Odhran Lynch denied Stephen Sherlock at the other end - wasn’t a key factor overall. 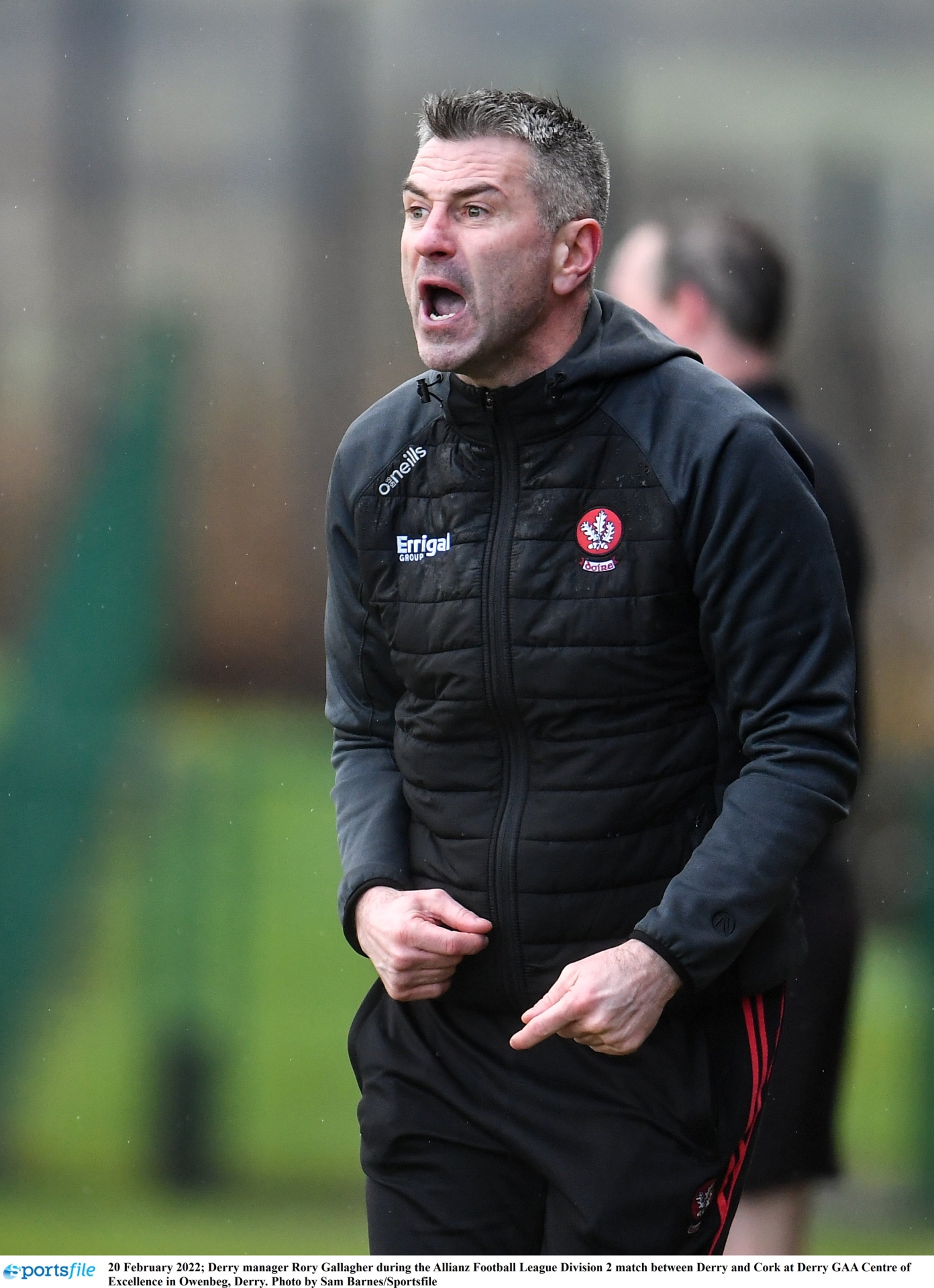 “Yeah, it was a turning point but ultimately I think we would have won the game no matter what because we were the better team.

“It was a good save but I wouldn't have been happy to have given away the goal scoring opportunity because we pride ourselves on not giving away too many of them but look, it was a great move to the far end and good to finish that because in the first half Benny hit the crossbar and it is not unlucky to hit the crossbar, he should have hit the net.

“Paudie (McGrogan) over played a one as well and a couple more were overturned but yes, it was a great move but just disappointing we only had one goal at the end.”

Derry now face into the mouth of a key stretch in their league campaign, with trips to Clare and Roscommon before they welcome Galway to Owenbeg.

It is a period that will define whether this is a year of securing a spot in the division or pushing for promotion, but Gallagher isn’t thinking too far ahead.

“It's a good position to be in. When you come up out of a division you want to make sure you get enough points to make sure you stay in the new division and while I would say six guarantees you that, with our score difference and one thing and another we are not in a bad position and we can look forward to Clare next week,” he explained.

"Clare are a team that apart from those yo-yo teams, have been the next best team over the past five, six seven years so we will have to focus on getting a really good performance.

“Hopefully we should have Gareth McKinless and Ciaran McFaul for the trip to Clare so that should help us.”

Gary Duffy's team certainly hit the ground running in the Leo Murphy Cup opener, which was switched to Celtic Park from Ballybofey