This season has been a journey of growth: Bradley

The Steelstown forward said every game presents a new challenge. 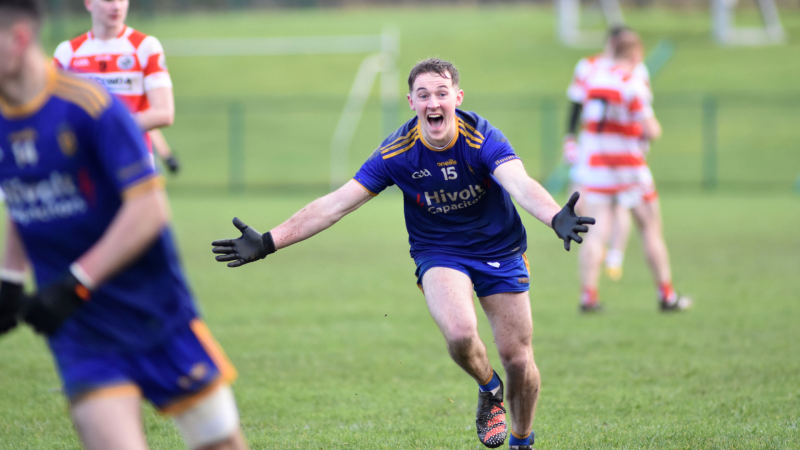 When the going gets tough you need a wise head, and, in Eoghan Bradley, Steelstown have a very wise head on very young shoulders.

Bradley has been a crucial cog in an attacking machine that saw the Óg’s bulldoze their way to the Ulster intermediate championship final.

On Sunday, that machine was almost ground to a halt by a defensive Moortown. After winning their first ever Derry championship in November it seemed that Bradley and his team were going to be stopped from further glory at the final stage.

But then, Emmett Deane kicked a wonder score to put them ahead for the first time in the 57th minute. And from there… well, it’s history.

“The growth this year has been more than the five previous years combined. This year has been mad. If we go back and play some of those Derry championship games, we beat those teams by a lot more now I think just because of how much we have grown,” stated Bradley.

“There’s nothing bigger than this. This is the biggest day. I’ve been lucky to play in Ulster finals at minor and U20 level for Derry and I’ve lost one and won one, but no feeling compares to this and to winning an Ulster title with this club. I’m seeing everyone here that I know on the pitch celebrating together and words can’t describe it.

While Steelstown were prepared for the defensive set-up of the Tyrone champions, it didn’t make it any less frustrating. Going in two down at the break, they trudged off looking devoid of ideas and the pace that had seen them became a force to be reckoned with on their way to the showpiece.

“Going in there at half-time I really thought we weren’t going to do it,” admitted Bradley. “Moortown just set up really well, very defensive, and they had a great structure.

"They were getting so much luck breaking us down, going on the break and getting scores so I just thought ‘where are we going to get these scores from?’

“But boys stood up. Cahir McMonagle stood up. Emmet Deane came on, he’s only come on in one other match this season and it just shows the strength we have in our squad that boys can come on and score a huge point at a really important time. It’s unbelievable.”

Sunday’s experience will certainly come in handy as the Óg’s soon turn their attention to an All-Ireland semi-final against either Na Gaeil of Kerry or Corofin of Clare.

There have been many lessons along the way of a crazy 2020 season, and coming out the other side of a tight and tense encounter on the biggest stage will do Steelstown the world of good.

“Every game is different and presents a new challenge. We’d never played them and it’s just so difficult to know what they’re going to be about," explained Bradley.

"When we played the Monaghan and the Cavan champions they were a lot more open which obviously gave us more joy going forward.

“That was probably the lowest scoring game this season and that’s a credit to Moortown and the way they set up to beat us.

"Fair play to them, it was very tight and it went right to the wire but we got a few scores at the end and the momentum was with us at the right time.”

The Derry man was speaking after his side's win over Moortown on Sunday.
ADVERTISEMENT - CONTINUE READING BELOW