The Derry man was speaking after his side's win over Moortown on Sunday. 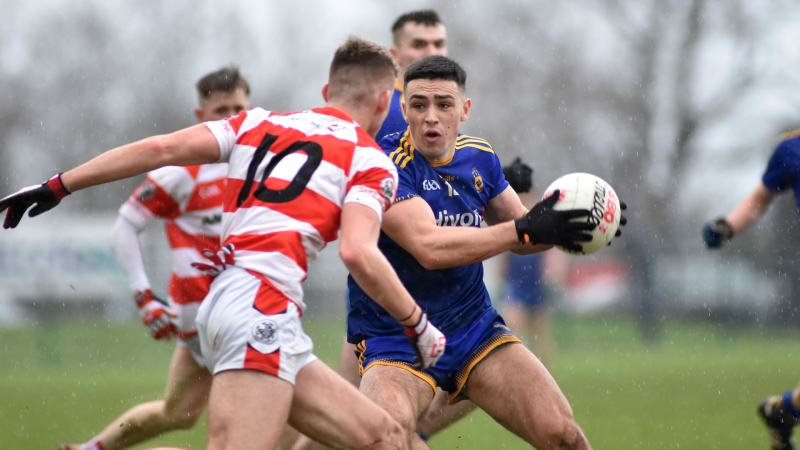 Ben McCarron throws a dummy as he faces into the Moortown defence. Pic by Mary K Burke.

While still young in age, Ben McCarron is no stranger to the big stage.

But the achievements of himself and his Steelstown team mates on Sunday were far beyond anything he had ever experienced or imagined.

The forward has featured in Ulster and All-Ireland finals for Derry at underage level, and a McLarnon Cup final for Cathair Dhoire.

He has already tasted senior football for the Oakleaf and will be involved again this season, but it will be a while longer before he meets up with Rory Gallagher and his county squad.

Because now, after securing their first Ulster championship, McCarron and his club are preparing for an All-Ireland semi-final with either Na Gaeil of Kerry or Corofin of Clare.

“It’s a massive day, it’s everything. It’s the boys you grow up with, the boys you see every day – they’re like family. To be on the same pitch as them and to have the best big days – four big days in Ulster – and winning a Derry championship too, it’s incredibly special,” admitted McCarron.

“You see every game how the players are growing, the likes of wee Cahir McMonagle, Jason McAleer and all the boys who stood up today when a few of the older heads and even myself maybe weren’t showing up. They pulled us over the line.”

By his own admission it won’t be a game he remembers for his individual performance, but as he stood on the Owenbeg pitch taking handshake after handshake

“It’s a very special feeling and you can see what it means to the club and to everyone. It’s hard to put into words to be honest. This has probably been a long time coming, but just delighted to get over the line.

“It’s incredible. We’ve taken every match as it comes and never looked past it. We’re going into an All-Ireland semi-final as Ulster champions on merit and for the 36 boys on the panel, for the management and backroom team, and for the club, it’s incredible. I can’t even put it into words.”

Reflecting on the final, McCarron admitted that their opponents Moortown worked extremely hard to frustrate and suffocate the Óg’s challenge and, while succeeding for a long period, eventually the character and the quality of the Derry champions told as they claimed the title.

“We thought we were probably as well prepared as we could have been but for the first 30 minutes it definitely didn’t look like it. They brought everything and to be honest we were really up against it,” he stated.

“It probably shows the nature of the team that we stuck in there. We knew at half-time that we’d only scored a point and our heads hadn’t dropped.

“We knew our chances would come and they did. Thankfully the character really showed in the second half and we managed to get over the line.”