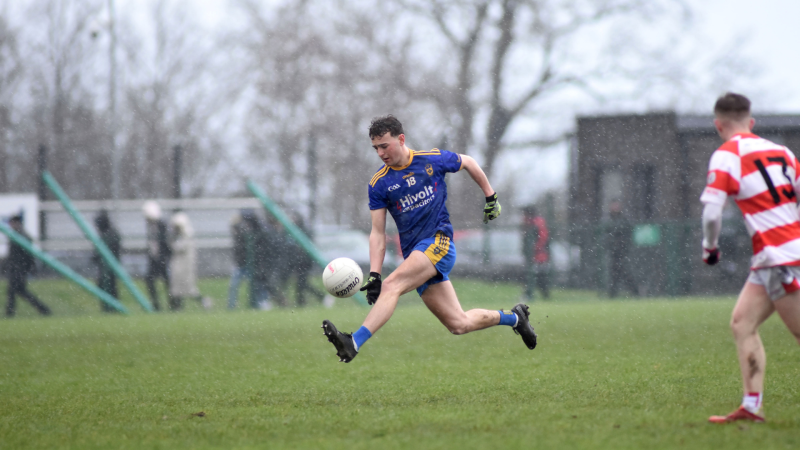 Before answering the first question, Cahir McMonagle admits that he isn’t the biggest fan of doing media interviews.

But after his performance in the Ulster championship final, scoring five of Steelstown’s six points to help his club to the provincial title, he knew he wasn’t going to escape the headlines.

Since scoring the winner for the Óg’s in the Derry intermediate championship final at the start of November – the club’s first Derry title – McMonagle hasn’t looked back.

He’s been a steady and consistent influence for the men in blue and gold, with a bag of tricks and pace to burn causing a nightmare for defenders across the province.

When Steelstown looked devoid of answers against a dogged Moortown, it was McMonagle who kept them ticking on the scoreboard.

He scored their only point of the first half – which was preceded by a dummy that sent two Moortown men flying.

Another score came in the second half before an equalising effort that was followed with a fist pump to the crowd.

After Emmett Deane put them ahead, it was McMonagle who rounded things off with two more huge scores.

Trailing 0-3 to 0-1 at half-time, Steelstown found themselves being challenged and being questioned, but, as they have done all season, they came up with the answers.

“We were frustrated in the first half,” admitted McMonagle.

“We only got one score, but we knew we had to be patient. We played to our strengths and took our wee half chances and it worked out for us come the final whistle.

“We’re taking the trophy down the road with us and that’s the only thing that matters.

He continued: “It’s not the first time we’ve been behind at half-time. We had the same situation against Donaghmoyne in the quarter-final and we have that belief in ourselves that we’re going to get the job done and thankfully we were able to do it at the end.”

The celebrations will go on for a few more days yet, but then it’s back to business. And McMonagle has one more thing on his mind.

“We’ve won our first county title this season and now we have our first Ulster so we’ll look forward to hopefully giving the All-Ireland a good go now,” he laughed.

“This is the highest level we’ve reached, and I’m just delighted to be part of this team and this club."