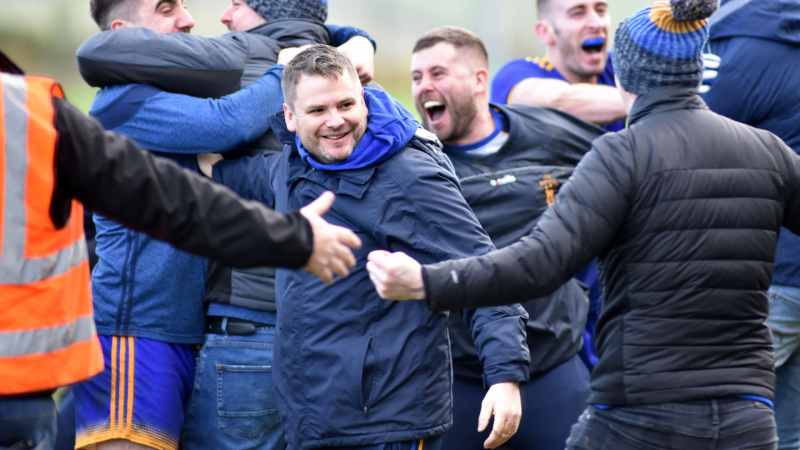 McGrath among the joyous mob after the game. Pic by Mary K Burke.

As Steelstown began their celebrations after becoming Ulster champions for the first time in their history, there was one person on manager Hugh McGrath’s mind.

McGrath guided his side to their first Derry championship in November, on the weekend of Brian Óg McKeever’s 13th anniversary.

And, as the manager explained, the man after whom the club is named was at the forefront of many conversations in the build-up to Sunday’s final against Tyrone champions Moortown.

“All week leading up to it there was an excitement in the group about being in the final but the big thing we were saying that was that we were so proud that Brian Óg’s name was being mentioned on a provincial level and in some places on a national level. For us that’s huge,” explained McGrath.

“We all know in the city what he was about and why we’re named after him, but when you see the way we dug that out today – that’s Brian Óg McKeever. That spirit is exactly what it was.

“We’re really proud. Lots of teams say that they’re proud, but we are immensely proud of getting that name on the map and hopefully we can get it on the national stage and make even more people aware of that.

“Even if its just to get them interested and to find out why we’re called Brian Óg’s – great – because that story needs to be told all over.”

If McGrath wasn’t considered an honorary Steelstown man by now, there is no doubting it after this weekend. The Saul native will have his name etched in the history books as the manager to lead the blue and gold to their first Derry, and now Ulster, titles.

While he has tempered expectations and kept things calm along the way, when the final whistle blew at Owenbeg and the dream was realised – McGrath let all the emotion out.

“We thought Derry champions sounded good but the Ulster champions certainly has a ring to it,” he said. Look, when you put the hard work in that these lads have and you’ve had so many close calls and disappointments, to get over the line in something so close and so tight and so nervy – it just means even more.

“Steelstown as Ulster champions is one that will live in the memory for a long time.”

His elation at the end certainly didn’t match McGrath’s temperament on the sideline throughout the 60 minutes of play.

The Óg’s knew coming into the game they were going to face a battle-hardened and defensive Moortown, but after scoring just one point in the opening half McGrath had plenty of notes for his men and, with a few timely changes off the bench, they got the job done.

“We actually played into Moortown’s game plan and into their hands in the first half. They set up really well and exactly how they thought we would. For such a young group, it can take a while to actually figure it out,” he explained.

“I was slightly more panicked than usual on the sideline but that was more down to the fact that our basics were poor in the first half.

“The changes that we made in the second half, I don’t want to take credit for it because you don’t know what’s going to happen when they go in, but Gareth Logue was superb – the amount of dirty, horrible ball that he won; Emmett Deane – hardly kicked a ball for us all year came in and scores an absolute wonder point to change the game and get us over the line.

“An exciting day, maybe not one for the purists but we’ll take the win whatever way it comes.”