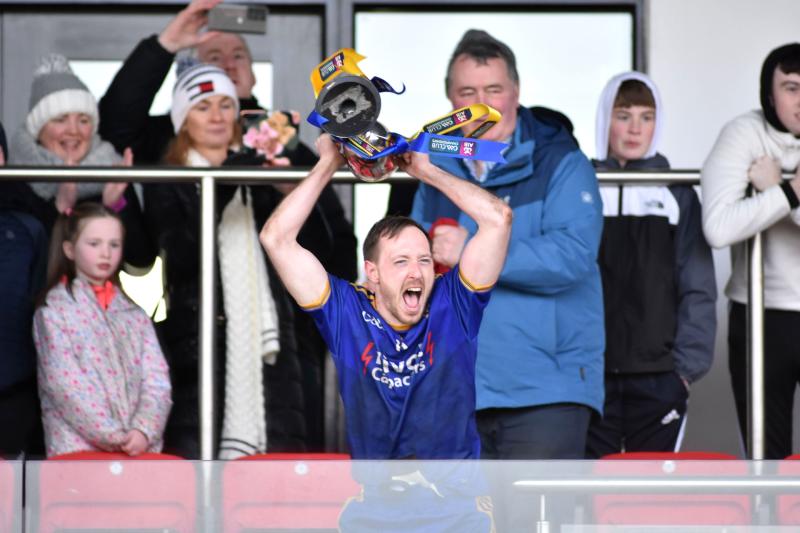 Sunday 9th January 2022 is a day that Steelstown will never forget. The day that they became champions of Ulster for the first time in their history.

Just two and a half months after winning their first Derry championship, the men of Brian Óg’s came through their toughest challenge yet to overcome a dogged Moortown by 0-6 to 0-4 at a packed Owenbeg.

Having dispatched of Cloughaneely, Donaghmoyne and Butlersbridge in some style on their way to the provincial showpiece, this was a totally different game in which Steelstown where often frustrated and only led for the first time in the 57th minute but, by the final whistle, they didn’t care one bit.

As manager Hugh McGrath took in the scenes of blue and gold on the field afterwards, he said it was a special and unforgettable day for the people of Steelstown, and also paid tribute to the late Brian Óg McKeever after whom the club is named.

“We thought Derry champions sounded good, but Ulster champions certainly has a ring to it! When you put the hard work in that these lads have and you’ve had so many close calls and disappointments, to get over the line in something so close and so tight and so nervy – it just means even more. Steelstown as Ulster champions is one that will live in the memory for a long time,” he said.

“All week leading up to it there was an excitement in the group about being in the final but the big thing we were saying was that we were so proud that Brian Óg’s name was being mentioned on a provincial level and in some places on a national level. For us that’s huge.

McGrath continued: “We all know in the city what he was about and why we’re named after him, but when you see the way we dug that out today – that’s Brian Óg McKeever. That spirit is exactly what it was.

“We’re really proud. Lots of teams say that they’re proud, but we are immensely proud of getting that name on the map and hopefully we can get it on the national stage and make even more people aware of that. Even if it’s just to get them interested and to find out why we’re called Brian Óg’s – great – because that story needs to be told all over.”

As Steelstown captain Neil Forester made his way up the steps of Owenbeg to collect the cup, the only words he could utter were ‘this is the stuff of dreams.’

“It hasn’t sunk in,” admitted Forester afterwards. “There was maybe huge relief and satisfaction after the county final, but this is a different level.

“Getting out of Derry was such a big thing for us because we just hadn’t done it. I kept saying just get past Cloughaneely in the first round and then you get the ball rolling then you don’t know what can happen with the momentum. We were brilliant that day, but the crossbar still had to save us and maybe that was that little bit of luck we needed.

“This team has just grown and grown. To win an Ulster title against a fantastic and dogged Moortown team in conditions that probably suited them and their defensive style is special. The fact that all those habits and the hard work that we put in has paid off.

“It’s literally unbelievable. We were talking about getting our monkey off the back in Derry but once we did that we have just kicked on so much. I honestly don’t know what else to say.”