Sinéad Comer hit 0-7 from frees as Magherafelt made the final four. 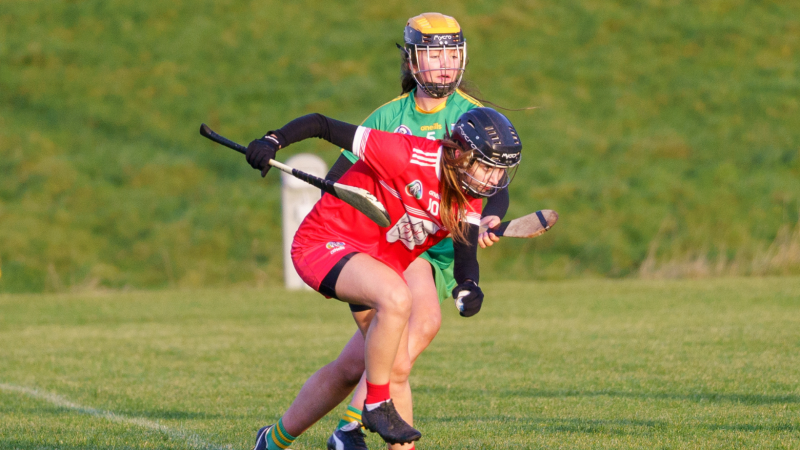 Siobhan Comer, ineligible for the 2020 competition, came into the side at the weekend. Pic by Catherine Comer.

Rossa camógs put the disappointment of losing the 2020 Ulster junior camogie final last week behind them on Saturday by defeating Mullaghbawn of Armagh in the 2021 opener.

Magherafelt were forced into a couple of changes, with Ellie McGuckin coming in for the unavailable Bríd Corrigan and Shauneen McGuckin, who had returned to Scotland for university, being replaced by Siobhan Comer.

Comer, ineligible for the 2020 competition, made an immediate impression on the game, winning a free for her side wide on the left, which Sinéad Comer converted after three minutes.

Comer added a 45 in the 7th minute, before pointing a free after she was hauled down on her way through the Mullaghbawn defence to leave Rossa leading by 0-3 to 0-0 in the 8th minute.

Desperate not to head into the water break scoreless, Mullaghbawn rallied and a Siobhan McKinley free found the target to give them a lift going into the stoppage.

On the restart, Dearbhla Walls collected a long ball and finished to restore the three-point gap, but when the hosts hit back through Jayne Hearty, it sparked both sides into life.

The Magherafelt side lost out by the slimmest of margins.

Comer and McKinley then swapped frees again to leave Magherafelt leading by 0-6 to 0-4 at half time.

The hosts began the second half in determined fashion and were level by the 40th minute.

A 35th minute Siobhan McKinley free closed the gap to one, before the same player repeated the trick after Rossa were penalised for overcarrying in defence, to much protestation.

The floodlights came on as the game entered the second half water break with the sides level at 0-6 apiece, and Magherafelt appeared to find an extra gear on the restart.

Another foul on Siobhan Comer allowed Sinéad to land a 51st minute free, and she extended the Rossa lead to two points with a big score against the wind from 45 yards with four minutes to go.

Mullaghbawn came strong in the closing stages, but a resolute defensive effort sealed Rossa's place in the semi final of the 2021 Bridie McMenamin Shield against either Kilclief or Drumgoon.

Bradley: There is to come from this Slaughtneil team

The Emmet's mentor says they have learned a lot from Sunday's drawn Ulster final.
ADVERTISEMENT - CONTINUE READING BELOW